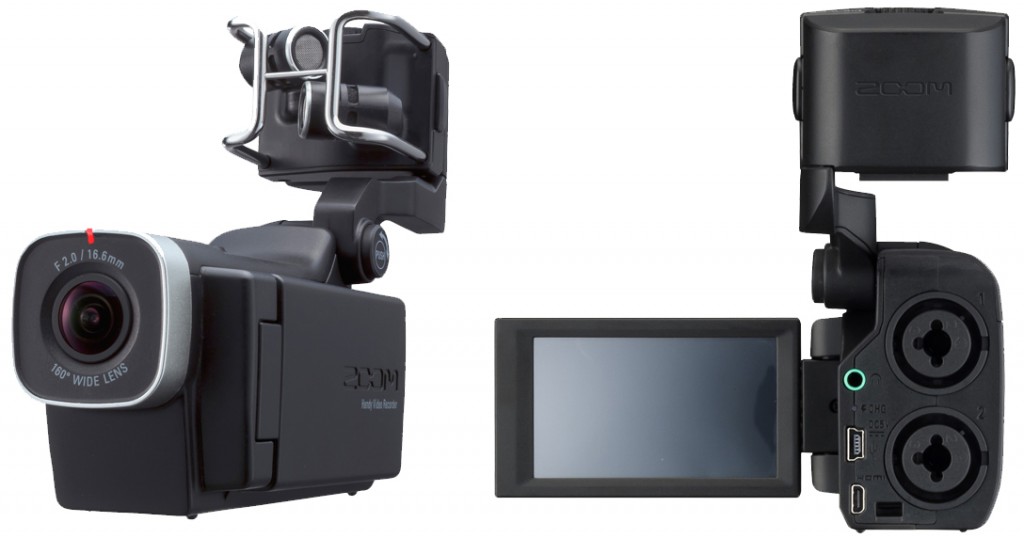 We’re big fans of handheld gadgets, and when you think of audio and video recorders, Zoom is of course one of the best brands out there. The Q models of their audio and video recorders have been huge hits in the market for quite some time now…we even saw a few of their audio models scattered among our top 10 best audio recorders. So what’s new here? The Q8 is a high-end device that records both audio and video. The sound quality is excellent at the standard 24-bit/96kHz but the video can record up to a whopping 1296p at 60fps. It’s compatible with most of their famous Zoom mic capsules and it can power up your XLR microphones with a selectable phantom power (-20dB pad). Those are just to name a few. The Zoom Q8 Video and Audio Recorder is a beast if you’re looking to create professional video and sound content. Let’s get into more detail.

At first glance we see we notice the 160º degree wide angle lens, high-res video quality, the two XLR\TRS combo inputs, and the fact that it’s compatible with a lot of Zoom’s famous interchangeable mic capsules, so you can choose based on which type of activity you’ll be using it for if you don’t like the stock XYQ mic. We’d say it’s one of the better models out there if you’re looking for a handheld video camera that captures semi-professional quality, aside from the evolving GoPro Hero models or popular Sony cameras. It isn’t a Point-of-View camera but most users out there nowadays go for either of these routes. 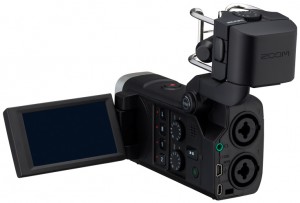 Another nifty feature is the tripod (three-prong) mount at the bottom of the unit. You can hook it up to a tripod and film that way. The Q8 really does stick to the label of “multi-use”, considering we can imagine this being used for merely everything from home videos of children, podcasts, filming concerts, music videos, sports, etc — the only activity we can’t see it being used is in extreme sports such as snowboarding, like what a GoPro can do since it doesn’t mount on to anything specific besides the tripod. The MINI USB and HDMI MINI out allow you to use it as a web camera for conference calls or vlogging since you’ll be able to plug it into your computer and/or use a USB microphone along with it.

One of the biggest features in terms of convenience in our opinion is the fact that the Zoom Q8 allows you to record the audio and video on separate tracks (up to four audio tracks, actually). If you’re an editing nerd like us, it’s always mandatory to have them as separate tracks to mix it better. Although you can choose the option to record them on the same track as well, we recommend going with the latter and you can always line them up in your video editing software. We love this feature.

The video quality of 1296p at 60fps is just above 1080p and is extremely clear. The standard for YouTube videos is 1080p (most TV’s as well) so if you’re planning on starting a YouTube channel or vlogging series, this is a great camera to buy. The only complaint we’d have is the fact that a lot of more ‘industry standard’ cameras coming out (such as the GoPro comparison again) include a 4k cinema option, but it’s not really a hurry as of now since they not only drain the battery (I think the GoPro’s only film for at most an hour using 4K, although their lenses are 180º) but a lot of devices can’t even support that yet. So this still remains an industry standard investment.

In terms of low light conditions, we didn’t see any problems here. We were especially skeptical with this capability due to the Q4 being pretty bad, and although it’s an improvement, it isn’t perfect (like the new HERO 4’s). 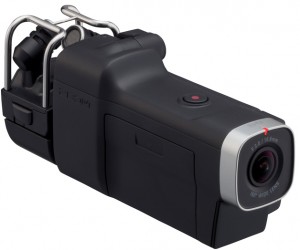 It does come with a wide-angle XYQ-8 X/7 (it’s fancy, but check the picture to see how the mechanism works) that’s very high quality. Upon using it we liked how it folds into the camera for easy traveling, and when you use it, just pop it up and you’re good to go. It also keeps it protected from damage. What’s even better is the fact that the XLR\TRS combo inputs can support external mics, so even if you have a professional condenser microphone, you can hook it up to the Zoom Q8 because it also provides phantom power (there are gain controls on the unit as well, acting pretty much like an audio interface).

The Zoom Q8 isn’t cheaply made. They always have a strong build to them, although if you’ve never touched a Zoom gadget before, you’ll be quite happy with the materials used. It won’t break easily on you, and if you take care of it you have an investment for quite a while (unless you’re an upgrade junky like us, we bet they come out with a new one in a few years!

The LCD screen is rotatable and the quality is pretty clear as well. It’s not too important to be picky about this when it comes to video camera shopping, but it’s always a plus. It’s touch-screen as well, so you can navigate the camera settings easily with the touch of a button. The 2.7″ size is quite fine with us; most models in the market are this size and anything larger is just a plus. We did have to press a bit harder to get our options to go through, but really there are no complaints here about the screen.

The final verdict on the Zoom Q8 video and audio recorder

As stated previously, it’s in our opinion a big rival to the GoPro. At the same time, it’s difficult to compare because it isn’t an action or point-of-view camera, and the Zoom Q8 has a lot more features when it comes to the audio side (a huge downfall with the GoPro is the audio quality, it’s actually pretty bad). The new HERO 4’s go up to 4k cinema, and although battery draining, may be the determining factor (since most people seem to be concerned with video quality — the more the better, right?). We would also compare the Q8 to the Sony HDR MV1, which is a bit cheaper and may be more appealing to you if you’re looking to save some money. However, it doesn’t come close to the Q8 in terms of additive features. Pick your poinson.

All in all, we love the new Zoom Q8 Handheld Video and Audio Recorder. If you want a handheld camera that will give you some nifty, fancy features and don’t want a GoPro, this is the model to get. It’s also a huge plus if you’re a musician and are interested in some sound recording, especially on stage.