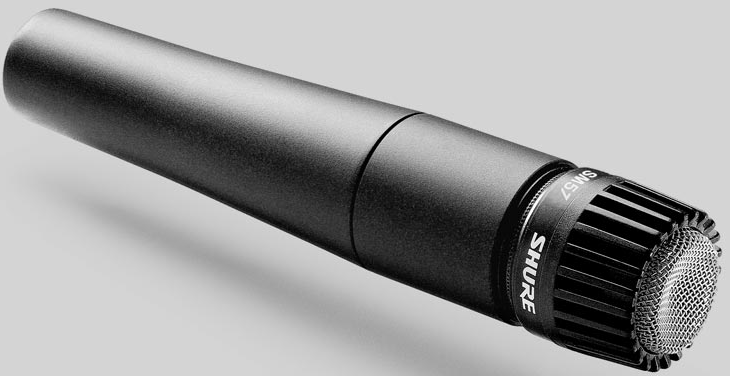 Shure microphones are the real deal, having said by many to completely dominate the microphone market, particularly dynamic mics most often used for live performances. We’ve seen these SM models of microphones used in a very wide range of music, such as recording or performing multiple instruments. The SM57 is one of their best dynamic microphones as backed up by numerous years of use by ourselves and others around the net. There’s a reason you see those 4 or 5 star review all over music websites, including ours. This one made it’s ranks into our best microphone for performing live. Let’s take a look at the Shure SM57 dynamic microphone in detail.

This thing is legendary. I’ve heard of musicians owning up to 2-3 of these at a time. It’s basically like the hammer of a tool shed — almost everyone’s got one due to it’s practicality, cheap cost and overall power. It’s build and stability work like a tank and it’s at around $100 retail. You can’t really go wrong with adding this thing to your arsenal, regardless of what you perform with or record in the studio.

The SM57 is a dynamic microphone, meaning they’re extremely versatile, great for rejecting outside noise and focusing on what’s in front of it, handling high sound pressure levels, and great for grabbing both high and low frequencies. They have a high gain before feedback functionality which makes them great for stage use, giving you a very high volume without hearing that pesky screeching noise. A lot of people use these for vocals, but if we had to name a microphone to be awarded the best “do it all”, this would be it.

The cardioid pick up pattern is also exceptional, which is especially designed to focus on the main source of sound while simultaneously decreasing background noise for some great isolation. This is why some drummers have 3-4 of these at a time — although relatively near each other, they can capture each piece of their kit to give them all separate sound sources.

Another aspect to think about is the fact that this mic doesn’t necessarily need phantom power, which can be very beneficial if your recorders/mixers/audio interfaces that don’t have this feature. However, if you want to get the full power out of it, we do recommend hooking it up to something that can help you increase it’s gain.

Main features and specs of the Shure SM57

Build and stability of the microphone

The SM57 is made of very nice material, especially at it’s cost. We’ve seen a lot of microphones half the price and even equivalent in terms of price tag made extremely cheaply, so you’re not buying a plastic mic from your local electronics store here. It is rugged and will last you quite some time if you take proper care of it.

In terms of dropping the mic on stage after you perform like a battle rapper, we wouldn’t recommend it. However, if you were to accidentally drop it on a hard surface (like I have, quite a few times), you most likely will not break it. It is extremely durable, and what makes it even better in terms of an investment is that a lot of the parts are replaceable: the screen and grille as well as the cartridge.

Common applications of the SM57

This is most ideal used for vocals on stage, but another extremely common usage is acoustic guitars. I’ve also heard numerous drummers express their love for the SM57, sometimes even setting up one of the mics for each different piece of their kit (I’ve heard some use up to 8 mics for on-stage performances). Setting one up for the kick and one for the snare is a common occurrence, being that the dynamic mic type allows it to rarely distort and take the powerful punch without the use of a pad (it can handle a very high sound pressure level). These are also considered the industry standard for guitar cabinets.

Aside from those, here are the official applications of the SM57 listed by Shure themselves: acoustic guitar, bass amp, brass/saxophone, congas, guitar amp,harmonicas, kick and snare drums, percussion, and rack/floor toms. But don’t let that steer you away from using it for anything else you seem feasible that can fall within the frequency range we provide below.

The verdict on the Shure SM57 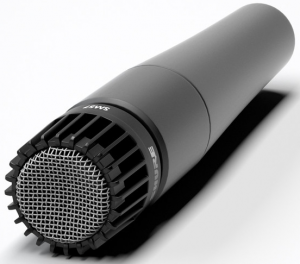 For one, the SM57 has been compared to nearly a hundred other microphones, especially it’s sister, the SM58 dynamic microphone — so what’s the difference between the two? The most noticable differnce between the two is the grille – the SM57 allows you get closer to the microphone as opposed to the SM58. The SM58 is better at dampening the higher frequencies since you can stand further away from it. The SM57 is less prone to wind noise. The ultimate verdict is it really depends — they’re both very versatile and can work for a large number of applications. Check out our Shure SM58 microphone review for further information.

As far as recording goes, we’ve heard of the SM57 be used pretty frequently. If you’re looking to find a mic that you’re going to be predominantly recording vocals with, we recommend looking at a condenser microphone (they’re a bit more expensive, but a better investment). Check out our best recording microphone article for more options in terms of condenser mics.

However, for other instruments, it’s great for recording capabilities. If you’re looking for somewhere in the middle of using a microphone for both recording as well as playing with live occasionally, the Shure SM57 dynamic microphone is your best bet, especially if you’re on a budget.