Rode microphones are some of our favorite in the market, and this time they’ve joined the USB mic game with a brand new model as a part of their NT series. The Rode NT-USB studio microphone offers us some powerful features as well as pretty good audio quality for the price and gives a lot of it’s competitors a run for their money. We saw rode make an appearance in our best microphone for rap vocals, so is this mic worth taking a look at? Only if you’re looking for a USB microphone in particular, otherwise for strictly recording there may be other alternatives out there for you. However, if you’re explicitly looking for a USB microphone, this is one of the best out there. Not only for home studio recording but numerous other applications that may be what you’re looking for. Regardless, let’s take a look at the new NT-USB.

Sound quality of the mic

The A/D conversion is 16-bit, 48 kHz which is surprisingly high for a USB microphone. This seems to be a trend for new mics that are only USB-based; this thing gives some condenser mics with an audio interface a run for their money (although still not as powerful with a high-quality interface and mic with phantom power). You will be satisfied with the NT-USB’s quality not only for communication via your computer but also for home studio recordings.

What’s great is the volume and monitor control on the front — if during a recording or conversation you feel that microphone isn’t as powerful as you’d like, you can turn the knobs and you’re good to go in terms of adjustments. You also get a purple LED inside the cage to show you the power is on. It’s plug-and-play, so hook it up via USB and you’re using it immediately.

Highlights of the NT-USB 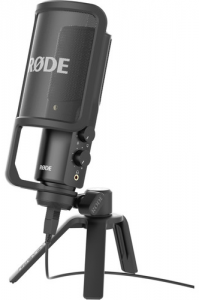 When shopping for a mic, one of our biggest concerns is of course budget but aside from that is the audio quality. The highlight features are merely additives, and the NT-USB doesn’t really have any fancy features included to up the price (which is obviously a good thing). What’s great about the Rode NT-USB is the fact that it comes with every single accessory you need; pop filter, tripod, ring mount, cable for connection and a convenient little carrying case to boot. It’s sometimes a hassle having to shop for whatever you need to add to your mic package, seeing not only the price go up but also the confusion it may cause of which models to purchase. The USB cable is pretty long (20 feet) and everything should be good to go and you’re ready to record as soon as the package arrives at your front door.

The NT-USB is compatible with Apple iPads (you need a USB camera connection kit for it to work, like the ), RODE Rec, GarageBand and some other audio apps. Although it isn’t a must, for those of you with an iOS setup, this thing is one of the best microphones for you. Since it’s USB, it’ll work with all digital audio workstations, so don’t worry about compatibility issues — you’re good there.

For those who are more serious about their recordings and are in a semi-pro or professional studio, we would not recommend it. In that case, we recommend the industry standard setup; This would include buying an audio interface as well as a real condenser microphone that hooks up via XLR input. Read our best recording microphone article for some shopping comparisons. For those who are unaware of this setup, the interface powers up the professional mic which blows most USB microphones out of the water in terms of both power and sound quality — USB mics aren’t on that level quite yet. Albeit, it is a lot more expensive than purchasing a USB mic and only using that. It’s up to you and your needs.

Regardless, this is great for those looking specifically for a USB mic, with applications such as voice acting, podcasts, or even as a microphone for gaming (read the article for some more comparisons). We’d also recommend the NT-USB for those who are on a budget and will be recording music in their home studio. It will give you quite suitable audio quality if you’re a beginner or even higher up while looking to save some money as opposed to having drop a pretty penny on an audio interface and a regular condenser microphone. All in all, we are quite impressed with the Rode NT-USB studio condenser microphone due to it firstly being a Rode mic and also giving us some great audio quality and features at a manageable price. Grab it while it’s hot. 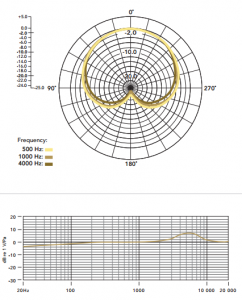