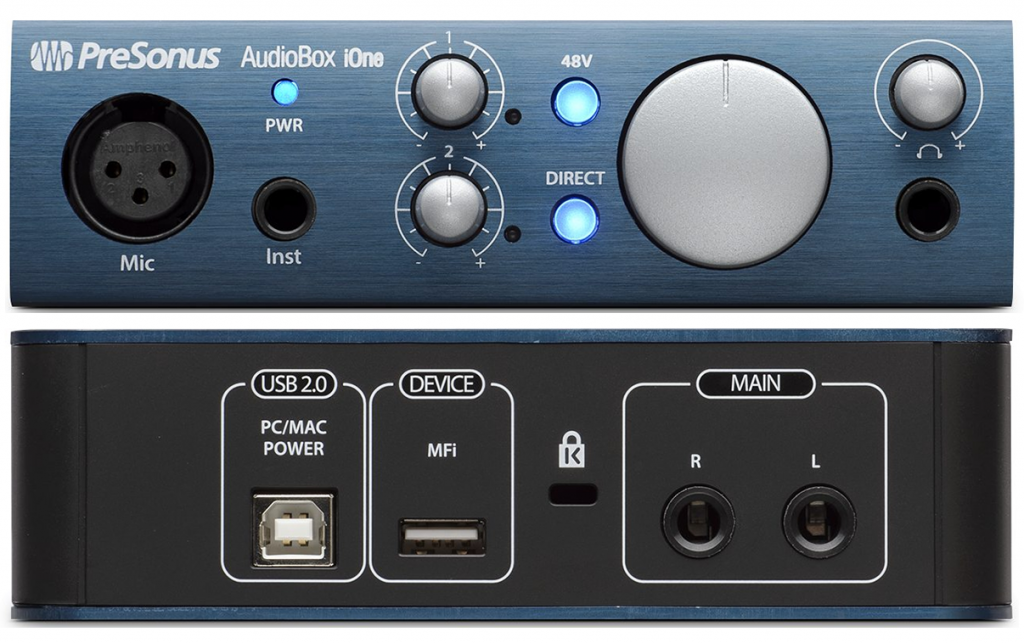 One of our favorite interface makers, PreSonus, has come out with a very solid pair of audio interfaces. These are entitled the ‘i Series’, and it’s a little upgrade of their original, very successful AudioBox interfaces. We had a chance to go over the main features and specifications of the AudioBox iOne audio interface and were very happy with the overall functionality and stability of it. As seen in the photo, this particular model of their i Series has a single pre-amp input, an instrument level on the front and a huge volume knob for easy access. What’s updated with this in particular are the preamps and A and D converters, giving us a lot better than quality than their original interfaces. Let’s get more in-depth.

What’s really cool about this is the converter holding up to 96k, giving us a very clear and crisp sound for all instruments or sound sources available. I usually don’t go lower than this rate, especially with this day and age as interfaces become more and more advanced. Although I’ve seen some go for 2 to 3 times this rate, those particular audio interfaces are crazy expensive, so this would be a better option for those looking for a solid sound quality, only need one preamp and want to be easy on their wallet. You’re getting zero-latency recording here, so you get to rid that pesky lag we all despise.

Another highlight PreSonus really emphasizes with the i Series is the compatibility with iPads. Although it isn’t too prevalent, I feel that a huge trend coming along is music production on smart devices. They’ve caught on to that possible trend here and have made these compatible with iPads, giving you the option of connecting it right in the back of the interface. They have what’s called “Capture Duo”,  which is a free iPad app that connects with their Studio One software. You basically use the “Capture Duo” app to record sounds from your AudioBox interface (pretty simple, just press a few buttons and you’re recording a track straight from the AudioBox). Once you’ve got a track down, you can then automatically transfer it to your computer in Studio One using WiFi or internet connection…It’s pretty instantaneous and extremely convenient. A huge plus for your work flow.

Lastly, they have an OK software bundle included with the package. If you’re looking for sounds, you won’t get anything here, such as with others that come with VST’s or effects plug-ins. However, I wouldn’t call that a con, just unfortunate. I’ve used the Studio One software a few times and I had a good experience with it, although I prefer using my original go-to, Ableton.

The verdict of the AudioBox iOne

It works as intended, and the quality of sound is actually quite impressive for the price. At 96k, you’re competing with a lot of popular models out there and your tracks will be up-to-par with sound quality standards, so don’t worry about that here. Just make sure you choose the right model. The only downfall to the AudioBox iOne interface is the lack of MIDI in and out, as well as only having one preamp. If you’re looking for these features, you’ll have to spend just a few more dollars on their AudioBox iTwo audio interface (only about $30 more retail). Otherwise, if you plan on only recording one thing at a time and can hook your MIDI controller straight up to your rig without the use of an interface, this will suffice.