One of our favorite brands in the music gear industry, Novation music equipment, has announced an exciting new MIDI control surface, specifically made for Ableton but can work for pretty much any DAW you may be using. The Surface Control XL works with any MIDI-compatible software, such as a Mac, PC or even iPad. What’s even better is that it comes with Ableton Live Lite, so if you’re looking for a copy of that this is an exceptional bundle. It’s got more than enough knobs, a decent amount of faders and the necessary 16 buttons for complete control of your effects and VST’s. Let’s analyze it further.

What’s really cool about this control surface is that it does what it needs to do — provides the necessary functions a control surface needs. If you think about it, it really doesn’t lack anything other control surfaces have. Very easy to make your own layouts. Another cool little feature is being able to customize the knobs with your own colors, which is only a plus, especially if you’re performing live. If you’re looking for keys you probably already have a MIDI keyboard, otherwise you can pair this up with just about any controller out there to complete your music equipment arsenal. It works as intended.

When it comes to mapping with software, it’s obvious that it is seamless with Ableton. One of the biggest conveniences of the Launch Control XL is that the knobs are evenly laid out in three rows (of eight), which matches the exact layout of Ableton’s interface. Not a must when it comes to using it with the DAW, but definitely nice for matching it up. But what about other DAWs? I tried using mine with both Logic and Acid Pro thus far and have had zero problems. It doesn’t necessarily have an automap software or can match the interface of other workstations, but once you plug it in, your computer and software will recognize it shortly and all you have to do is assign the functions to the knobs, faders, or buttons. 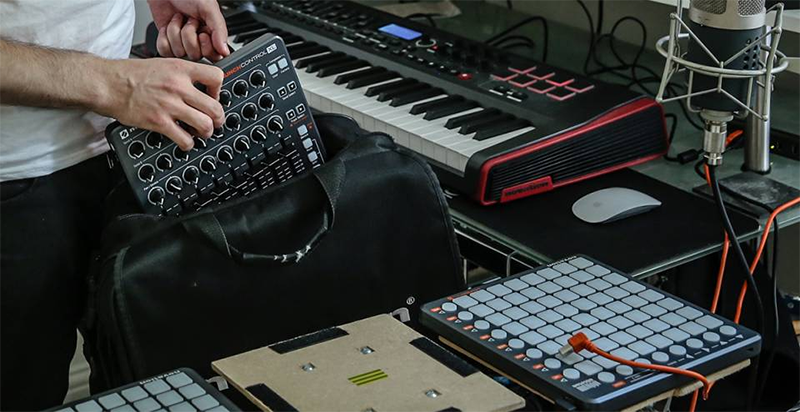 The stability and build of the Launch Control XL is actually quite impressive. We’ve always been satisfied with the builds of Novation products and this doesn’t steer away from that in any way. It’s highly portable (as seen in the photo above) but just be careful as it isn’t necessarily stainless steel. However, if you drop it, it won’t necessarily shatter and it isn’t made of cheap plastic. Another great feature in terms of convenience is it being bus-powered so you don’t have to tamper with any extra wires or annoying AV adapters.

As far as included software goes, we’ve stated that it comes with Ableton Live Lite. You’ve also got a standard MIDI controller editor software as well as a nice (surprisingly decent sounding) Loopmasters sample content. For the price and if you’re looking for Ableton, this is a steal.

Here’s a link to the Launch Control XL user guide.

The verdict on the Launch Control XL

This thing is rugged, built very well and maps extremely well with your digital audio workstation, especially Ableton with the matching layouts. Seamless integration for full control of the knobs, faders and buttons. The only complaint we feel is perhaps the lack of a synth VST with the software bundle, but beggars can’t be choosers. I can see this pairing up with a Launchpad S or even the numerous MIDI keyboards Novation has built over the years. The Launch Control XL MIDI control surface can only help complete your music equipment arsenal when it comes to adding into your mix.

We’ve heard this surface compared to others around the market, such as the Allen & Heath Xone K2 (a few bucks more), so check that out if you’re looking to compare. It’s actually a lot more solid with a few more functions, but you sacrifice that with price. Also, if you’re looking for something with keys, you can check out our Novation Launchkey MIDI keyboard review, or more options for a specific controller in our best MIDI controller for Ableton article.