The gear kingpin Native Instruments has just dropped a bomb on us with an all new DJ controller specifically made for Traktor! The Traktor Kontrol S8 DJ Controller is an absolute beast, bringing us control over 4-channels and a seamless integration with their Scratch Pro software. The two LED’s on each side of the controller is crucial for those performing in terms of giving us some navigation control — Some are saying that ‘future DJ’s will no longer look at their laptop or computers’ — and although we think that could be the case, it all depends on your personal preference. With the S8, NI also bring us their new signature touch-sensitive knobs and faders, high-quality performance pads, some analog inputs and more. Let’s get into the Traktor Kontrol S8 in more detail. 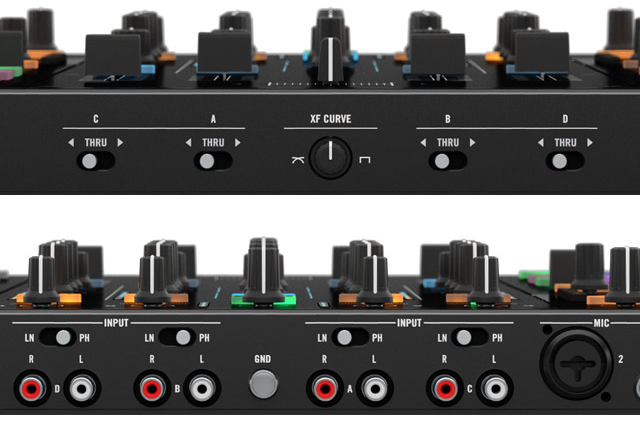 The term they’re using is “the future of DJ’ing”. Although that is ultimately up to us who actually DJ, they’ve got a good point here. The 4-channels is becoming the industry standard nowadays and we’re glad it’s still intact with the S8. The LED displays are also a huge plus, not only for recording but performing as well. Browse, get track info, effects and filter values are visible and you can also access ‘Remix Deck’ in full view. They’re high-resolution and support color so it’s almost like literally having two computer screens built-in to your controller. Very sleek!

The built-in professional audio interface is also solid, giving us some clear quality with the 48 kHz \ 24-bit rate of audio. If this is beneficial for you it depends on if you have an audio interface yet or not — if you don’t it works in your favor. 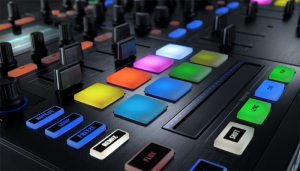 One of the biggest highlighted features and upgrades of the S8 is the inclusion of their touch-sensitive controls. This is in our opinion very innovative as it steers away from the standard physical control knobs, faders and strips. NI has also included this tech in their Komplete Kontrol S8 MIDI keyboards as well. We love it and don’t think it’s cheaply made at all.

You can still get by without jog wheels in a sense — you’ll have to beat match using the sync-button. The no jog wheels obviously means no scratching here (the backbone of DJ’ing, right?), but there’s always ways around this, especially if you already have some TT’s or CDJ’s handy to plug into it. If you don’t have any of those, you’re out of luck and if you’re looking to scratch you’ll need to buy some separate wheels to accompany the S8. Maybe they’ll include some wheels in their next upgrade?

Lastly, another standout feature of the Kontrol S8 is the Remix Deck controls built-in to the controller. This is one of NI’s biggest ups when it comes to their Traktor DJ software, which allows us to create and add sounds, loop, and customize the sound of our mixes altogether.

A lot of the gear heads, especially in this thread about the S8 controller, were keen to raising their eyebrows at the price. Just keep in mind that a lot of these ‘experts’ almost always critique the price of any new piece of gear that comes out, especially NI stuff. There isn’t much to criticize about the S8 controller besides the price-tag because in our opinion everything it claims to do it does, and it does it well. NI is always on point with the quality of their gear (and their marketing!), although some would complain about their strategy of making gear only for their own software. Don’t be alarmed because these controllers do work with other DJ software, although you’ll be using about half of the machine’s capabilities. In terms of an upgrade from prior controllers that are mostly all-in-one, especially the S4? It depends on your wallet. But if you’re looking for a brand new DJ controller, the S8 is a beast. 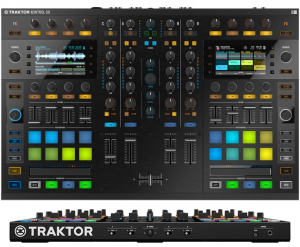 What I love most about NI is that they rarely ‘play it safe’ — they are always going for some innovation with their products. For those concerned with price, always remember that you can grab their Traktor Kontrol S4 Mk2 which is about half the price (it’ll probably continue to go down as time passes). This is an extremely solid DJ controller as well, albeit you’re lacking a few features as compared to the S8: No LED screens (instead of jog wheels), no touch strips, less dedicated buttons,

The S4 Mk2 does however have two jog wheels for scratching so if you were bummed that the S8 did not include them it may even be a better option for you. It also comes with Traktor Pro 2 software, performance pads, a loop recorder, a built-in audio interface (same quality as the S8) and more. Which option is best for you depends on what specifically you’re looking for. Another solid option is the Pioneer DDJ-SX2 controller that’s a bit cheaper and has some similar features.

You can also check out our top 10 best DJ controllers article for some more picks to compare and contrast.