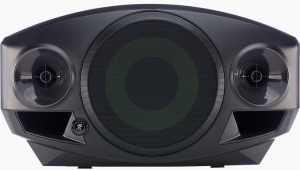 One of our favorite brands known for making speakers, Mackie audio gear, has a brand new portable PA speaker worth taking a look at. To us, it’s basically a Bluetooth speaker we’re all used to but one that has gone to the gym for a few years straight and gained size and features. It’s battery-powerable, allows for Bluetooth connectivity with any compatible device, and it also comes with it’s own app. Let’s take a look at the details of the Mackie FreePlay Personal PA System.

Main features and specs of the Mackie FreePlay 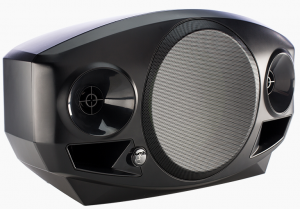 The front gives us two stereo compression drivers on each side (the smaller speaker components) with the listed 8″ woofer in the middle (pretty hefty for a portable speaker in our opinion, which is a huge plus). The overall look and feel of it is simple yet rugged with some decent made mesh grilles to cover up the woofer and components.

The back of the unit has two combo jacks for quarter inch or XLR inputs (mics, guitars, or any instrument really). The picture also shows us the AUX IN port for any AV application such as your phone (if you want it to be wired). Aside from the nifty ports, we’ve also got a built-in digital mixer that really makes this model stand out from the rest of the wireless speakers in the market. You have four channels which are controlled with the main level knob (Channel 1, Channel 2, Main, and Bluetooth). You’re also getting some on-board sound processing that isn’t necessarily a must, but fun to play with. There are 16 FX to add to your sound if you please, a “feedback destroyer”, and EQ with four voicing modes depending on your current application (performances outdoors, practice in the garage, etc). 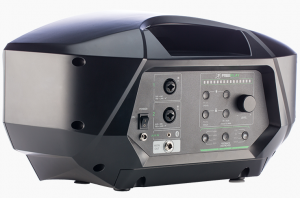 This thing is pretty tank-like. As stated before and as you can see by the size specs, it isn’t one of those speakers you’ll carry around to the beach in your bag or pocket (although we will bring this thing camping with us on the table — we’ll just make sure it isn’t in the sand or susceptible to damage). You have a handle on the back for easy carrying, and it’s actually not that heavy coming in around 11 lbs. The size to us helps it remain more stable wherever it is, as it is more noticeable to people around you and is more difficult to knock over. Just make sure it’s safe in your car when you travel.

The fact that it’s battery-powered is a big plus for us. Considering one of our favorite wireless speakers (the Marshall Stanmore) needs a plug, and most others needing to be charged — this is perfect for bringing extra batteries to skip the hassle of it being out of order to recharge every now and then. Although, keep in mind that it does take a whopping 8 D-Cell batteries. You can however purchase their lithium ion battery pack separately that may be worth it to you (you get about 10 hours of listening with it — it’s just going to cost you a few extra bucks). 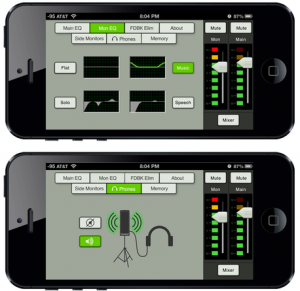 This thing can get loud. With the 8″ woofer almost as big as some studio monitors out there, you’re getting some really nice bass. In terms of being completely studio quality, it wouldn’t be near the ‘accuracy’ of most monitors; however, we didn’t really expect it to either. It’s quite feasible when it comes to quality and overall power. It’s a beast.

As we’ve all witnessed the standard among the market in terms of providing an app with new gear (especially the higher price points), this one is no different. We actually love this app because of a few reasons. One, since you’re connecting to the speaker via Bluetooth, not only can you control the music (we use Spotify), but you can mess around with the FX and EQ as well. As stated before, it’s not like it’s a necessity or anything, but if you’re a sound nerd like us, it can’t hurt — especially if you’re gigging or presenting and don’t want to hassle with speaker and keep it away from you. You’ll look sleek being able to control it all from your fingertips.

You can use the app for control of basically everything: EQ, mic preamps, processing, reverb sends, etc. To answer the common question: Yes, it supports Android as well!

The final word on the Mackie FreePlay speaker

As we said before, this isn’t a typical wireless speaker you’ll find at an electronics store. With that in mind, if you don’t plan on using the combo jacks or built-in mixer, you may be able to settle with a different model that’s a bit cheaper. Check out our top 10 best wireless speakers article for more options. Otherwise, grabbing this will still be worth it in our opinion — the 8″ woofer and two components alone blow most portable speakers out of the water.

The Mackie FreePlay Portable PA Speaker is an awesome solution for those looking to take the next step in wireless audio playing. Even if it’s just for parties, this thing is worth the money if you have it.