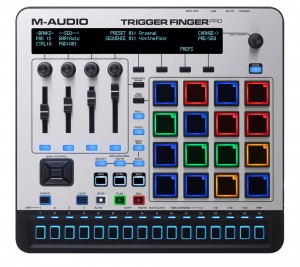 About ten years ago, M-Audio came out with the Trigger Finger (pretty much discontinued), stated to be one of the first MIDI pad controllers to be released in the music realm. Now they’ve got the first fully integrated drum sequencers. The Trigger Finger Pro is a portable performance instrument with on-board sequencing as well as a software control station. It consists of 16 ultra-responsive pads (four-by-four). Automatic mapping is included, VSTs are hosted and DAWs are integrated with in the all-new Arsenal software. This combo enables the seamless integration between the hardware and software. Hardware synths in sync with software beats can be sequenced with the device as well. Let’s check out if it’s the real deal.

“Fully integrated” means that you’re able to incorporate the Trigger Finger Pro with any workflow you already have. The fact that this piece of music equipment has an inclusion of an onboard step sequencer is huge, basically giving the Akai MPC Renaissance a run for it’s money, and it’s for less than half the price. The step sequencer helps with any live performance or home studio production

Another one of the most attractive elements is probably the virtual synthesizer. There are more than a thousand professionally designed presets available if you’re actively seeking to add sounds to your library (in our opinion, you can never really have enough). Another impressive element is the virtual drum module and pad controller. Besides seamless integration with Trigger Finger Pro, premium drum and percussion samples can be accessed. There are VST instruments and a drum sample player too. Custom drum sounds can edited and spliced internally as well, basically making this pass off (almost) as a standalone drum machine.

The additional 48 controls (for rotary’s, sliders) can be assigned to any plug-in or VST you may be using in your setup. I”ve had success in mapping it with Ableton, Logic and Pro Tools so far. In sum, this thing is more than just a pad controller via MIDI — it’s gives you a ton of flexibility in terms of live or studio environments. 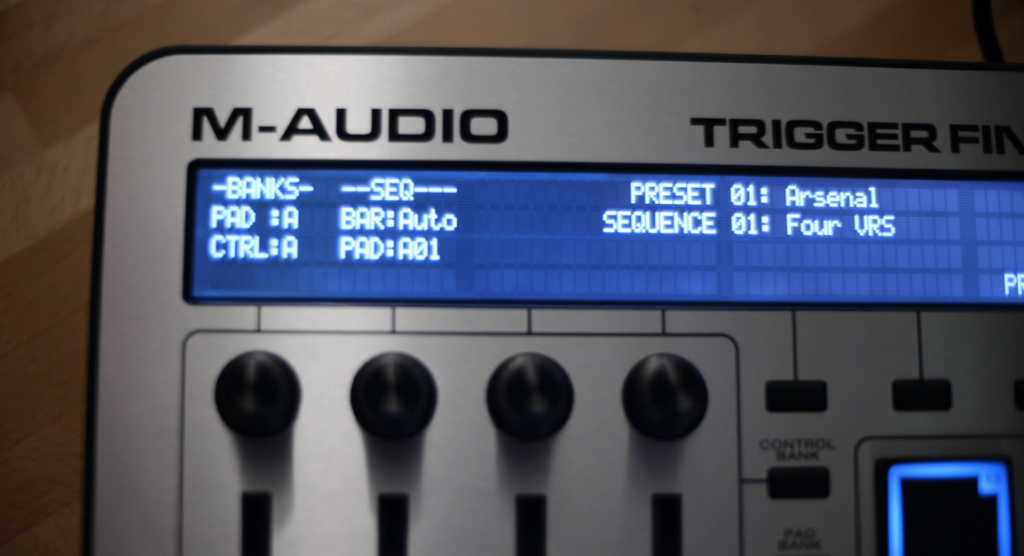 The Trigger Finger Pro is suitable for those who are seeking comprehensive music production capability. It is the best choice for multi-talented musicians in particular because software integration is a must in their live performances. It provides them with true hands-on control.

There are 4 faders, 4 knobs, 4 buttons as well as 4 control layers, allowing you to own 48 controls, which can be freely assigned to MIDI parameters like volume, pan, effects and pitch. The 16 velocity-sensitive pads of this product are ideal for playing drum sounds, launching loops and samples and even controlling video projections. It is a powerful package both onstage and in the studio after the addition of the new on-board Arsenal software. No matter if you are using PC or Mac, this tool is suitable to you as both types of computers can be connected with a USB cable. Compatible with pretty much all DAWs (as I’d hope so in this day and age), such as Logic Pro, Pro Tools, Ableton, Reaper, and Reason.

These are up there. And I was nervous because of the price. When I played around with them at the show I was satisfied, so if you’re worried about the pads, don’t be: they’re legit. In terms of portability, we recommend getting a case, but with that being said it can be taken merely anywhere as it is very lightweight. This is good news for live performers who are advanced enough to include step sequencing in their performances. The aesthetics are quite pleasing as well, with multi-color drum pads giving a great persona in your studio on or on stage. The brushed aluminum make doesn’t hurt either — an overall solid build.

Here’s a huge make or break when it comes to buying this piece of equipment — the inclusion of software. M-Audio has their own DAW out, Arsenal, which is a bit unknown as of now and not really recommended, especially if you’re starting out. If it were up to me, I’d go with one of the more popular DAWs out there. AIR drums is pretty decent, but I haven’t been a big fan since I’m an OG when it comes to drums and still sample breaks. However, the Hybrid 3 synthesizer that’s also included is actually really good, and comes with some gem sounds.

The sample packs and loops will be your call, as I’m not too big of a fan of preset sounds and loops that a lot of other producers may already have/be using. It doesn’t hurt, however.

Is it worth the price? The Overall verdict Well, yes, especially if you’re going to be using the step sequencer and software that comes with it. Also good news is it is not attached to the Aresenal software. You can load any VST you want. It looks like a trend of some devices the past few years (and hopefully not the future for very much longer), especially with inMusic (owners of Akai, M-Audio, Alesis, etc) are merely USB controllers paired with a bunch of software. The reason the Trigger Finger Pro stands out is because it has a step sequencer built in and can be a standalone…otherwise, nothing too spectacular besides the decent quality pads and software bundle. But for $400 retail? Your call.

As stated previously, one of the main features that make this stand out from others is the step sequencer and included software. The uniqueness would be it’s ability to act as a standalone. A lot of other pieces of equipment that are similar in terms of pad control and sequencing don’t have a crazy software bundle — this will probably be the deciding factor for you. If you absolutely need this software this is a must have. You may also find it advantageous if you’re looking for a standalone. Otherwise, take the price into consideration. Although, M-Audio has never failed us in terms of stability and overall build (our Oxygen MIDI keyboard has lasted 3 years already).

What’s great for this standalone hardware sequencer is that it syncs via USB within your DAW and it allows you to bypass some latency issues that may arise with working with VST drums. You can monitor it externally and design tracks in real time over your songs, although that’s based on how you make your grooves (I personally do not). Sounds like it’s worth the price if you know what you’re doing.

We recommend checking out some other MIDI pad controllers we’ve highlighted to see if you can save some money, although these do not have an on-board step sequencers or fancy software bundles like the Trigger Finger Pro.