Hercules DJ is at it again, this time with their latest addition to the DJ gear game, the DJControl Inpulse 300. We were able to get our hands on one of these to try it out hands-on and we were not disappointed in its effectiveness and numerous standout features. For one, it covers nearly all of our favorite essentials that go into a solid DJ controller. However, they also have some great additive features that make it attractive for those who need it, especially some beginners (although this is by no means a completely ‘beginner’ DJ controller). Such as with the ‘Intelligent Music Assistant’, ENERGY function, light guides and more, we were quite impressed with the powerful punch this one packs. Overall, this is one of Hercules’ most complete DJ controllers ever. Let’s get into the details.

Main features of the DJControl Inpulse 300

Build of the DJControl Inpulse 300

Overall, Hercules never disappoints when it comes to their build in this price-point. You wouldn’t be able to legitimately compare some of their older DJ controllers to higher-end models in terms of build, since many that using certain types of steel or more expensive hard shells get into the thousands range. All reviews we’ve ever completed on Hercules gear do not underwhelm in build and that’s one of their first and foremost standouts. Especially since some of their gear are targeting “beginners”, we always want our beginner music equipment we buy to at least last us a few years as an investment as we learn a new skill. This particular controller however not only gives us that in a build that won’t break on us easily, but also a learning curve with essential DJ controller features. 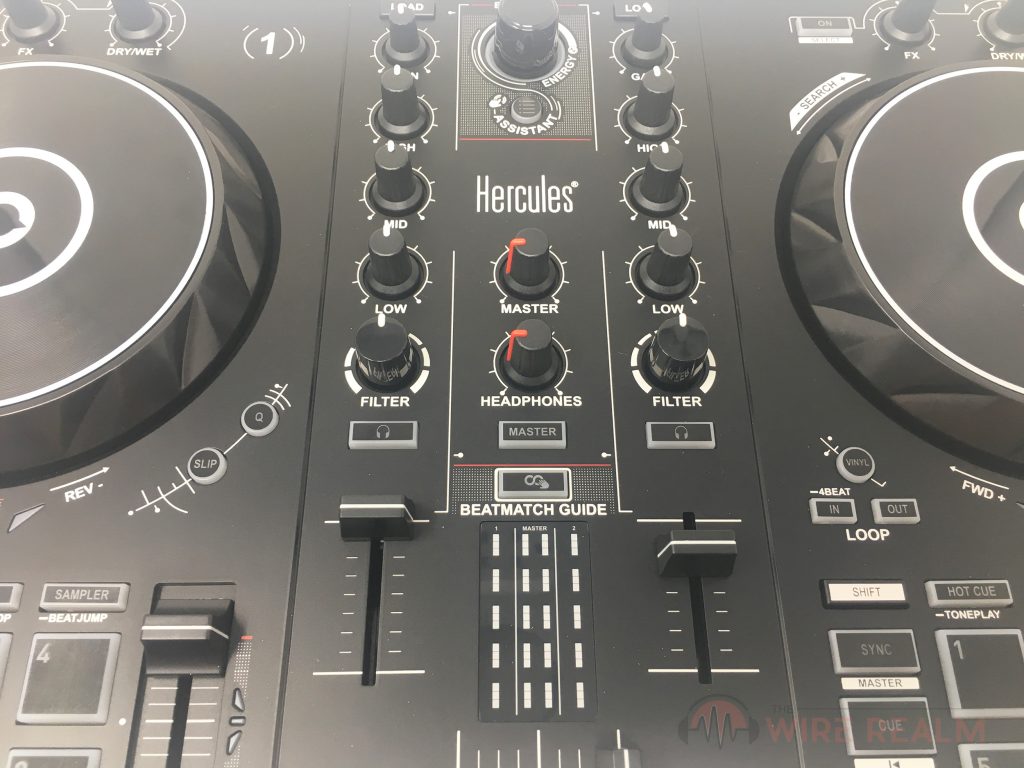 The jog wheels of the DJControl Inpulse 300 worked very well when we got to one of our favorite parts of using it (and always will be) — scratching. They’re slick but not too slippery, really hold a groove well, and are a great size to really fit our fat fingers. This typically is a problem (for us, at least) — a lot of jog wheels aren’t big enough, and some are just too sensitive for our liking (these are a nice 150mm). Overall it’s made of a higher-quality plastic and no steel here, but that isn’t necessarily a con considering the price of this (again, most controllers out there that incorporate higher-end military-grade metals are triple the price).

Lastly, the performance pads were really easy to pair up with samples and the overall build is of a fine rubberized button. They’re also velocity-sensitive so when we were able to chop up a drum break and get to going on some drumming, we weren’t disappointed. We’ll be using this for some sets for sure when we like to improvise on some sample stabs and chopped breaks during our songs.

Standouts of the DJ controller

Let’s get into actually using the Inpulse 300. We tried this one out for more than a week and practiced both a makeshift live work flow as well as using it in our studio to make some tunes. In terms of the needed DJ controller features, the Inpulse 300 doesn’t really lack anything whatsoever, especially in this price-point and targeted DJ audience. Using the jog wheels synced very well with DJUCED, and we were able to get our scratch on no problem at all. Of course, we tried this out with both Serato and Traktor as well, and found no compatibility issues, although the additional features that really make this one a seller will be of less use since it particularly pairs up only with DJUCED (such as the IMA) — that doesn’t mean you can’t use other software, however. The performance pads were also great when using, and easy to assign some samples to — simply import whatever you want into your library (we like to chop up some drums or stabs first in our DAW and then bring them in to DJUCED). 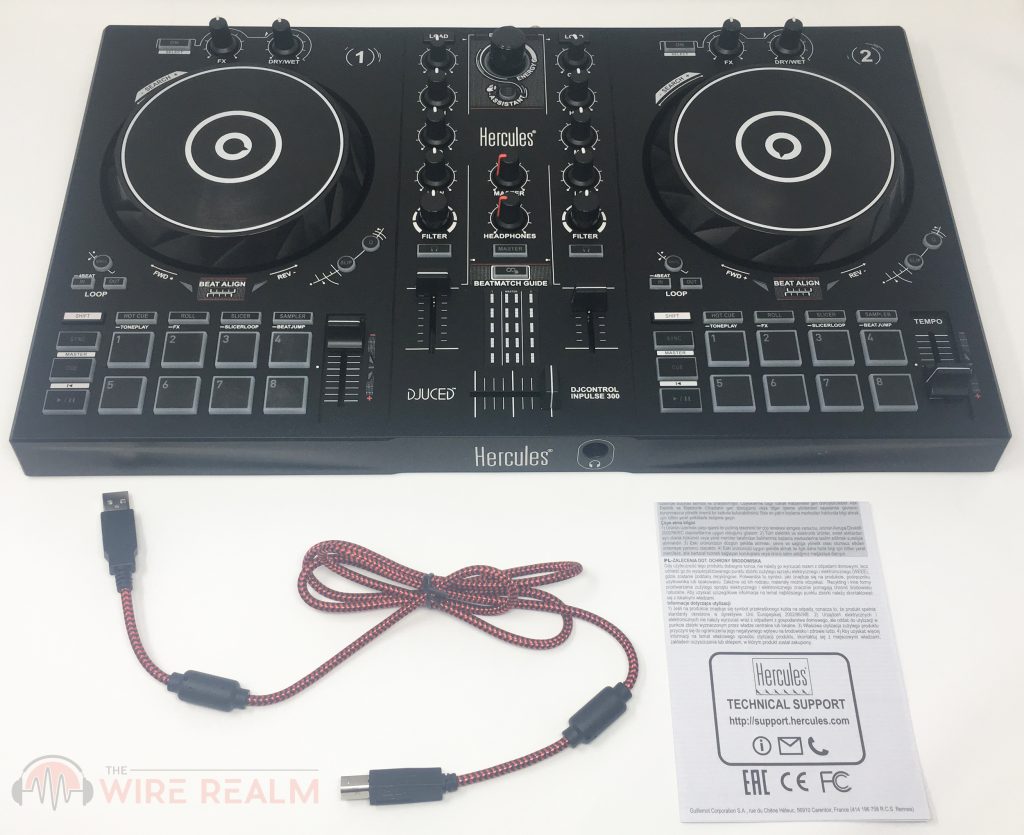 The Intelligent Music Assistant (IMA) is also huge here. When testing this one out, we found it quite useful, although we know some DJ’s on a more pro level who perhaps wouldn’t find it necessary (those who already have their own sets created, or perhaps just use only their music). For those of us who aren’t headlining Coachella however and are perhaps performing at smaller gigs such as house parties or weddings (or even at home with some friends over), this does nothing but help our work flow and overall skills as a DJ. When using it, we were given song suggestions based on what track we were currently spinning. We were also provided a useful list of songs that are popular around the world by other DJ’s — this was also convenient for us when we were building a play list for future use (you don’t have to use it live and on-the-fly per se).

Lastly, there’s a nifty feature that sorts songs and suggestions based on ‘level of energy’. If you’re in a happier, major key mood and want some similar tunes, it uses an algorithm to give you some suggestions so you can keep that feel up instead of having too drastic of swings and perhaps losing the attention of your audience. Keep in mind as well that you can control all of this navigation from the DJ controller itself (it syncs with DJUCED). Just simply press that IMA button at the top and use the top large knob for control and nav.

The light guides are also a big standout we noticed when using the Inpulse 300 DJ controller. Labeled Beatmatch Guide by Hercules, this feature gave us a lot of help when it comes to some of the core tasks DJ’s are responsible for. This will be especially helpful for beginners who need a little pick me up, but can also learn at the same time for the future for when you don’t need it. Below each jog wheel and tempo fader you’ll see lights that act as guides during your set. When you have a particular song playing on one channel that guide will keep that tempo in mind for when you load another track on the other channel. Once that other track is loaded, the guide will give you hints if you need to either slow down or speed it up. The lights start to point up for slowing down or vice versa for increasing the speed.

A few other standouts we noted to be useful when using our Inpulse 300 include some included on-board BPM adjustment on the actual DJ controller itself (extremely useful here if you’re making a set on the fly), track alignment, EQ for both channels (filter, low, mid, high and gain), and some helpful DJ Academy tutorial videos if you want to increase your DJ knowledge as a whole. 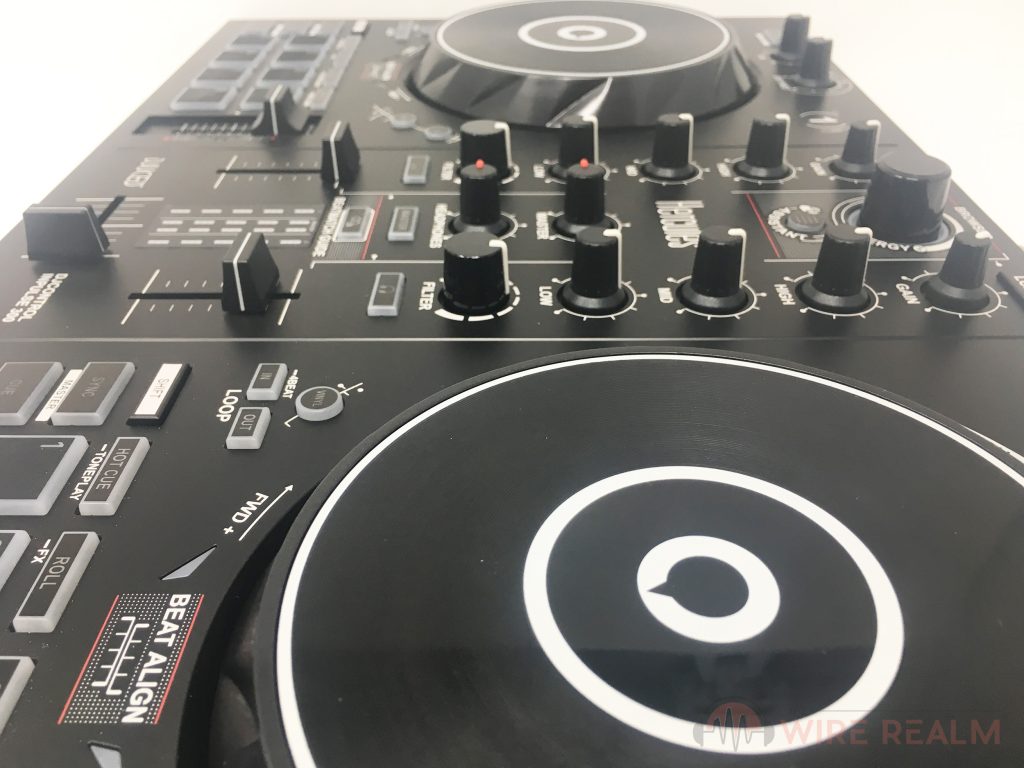 The final word on the Hercules DJControl Inpulse 300 review

As stated previously, this in our opinion one of Hercules’ most complete DJ controllers in their line of many highly rated DJ gear. Although they still keep it true to their roots in terms of reaching out to those wanting to get going on a new DJ career or perhaps just have some fun in the studio or on stage, this one starts to up the ante in regards to DJ level and we’d even recommend this for intermediate DJ’s who don’t want to spend thousands on a luxurious Pioneer or Rane controller.

All in all, the Hercules DJControl Inpulse 300 is a DJ controller we’ll be adding to a lot of our guides when it comes to reaching a great price point and balancing out features that are essential in this day and age of technological advancements when it comes to music gear. Well done, Hercules.