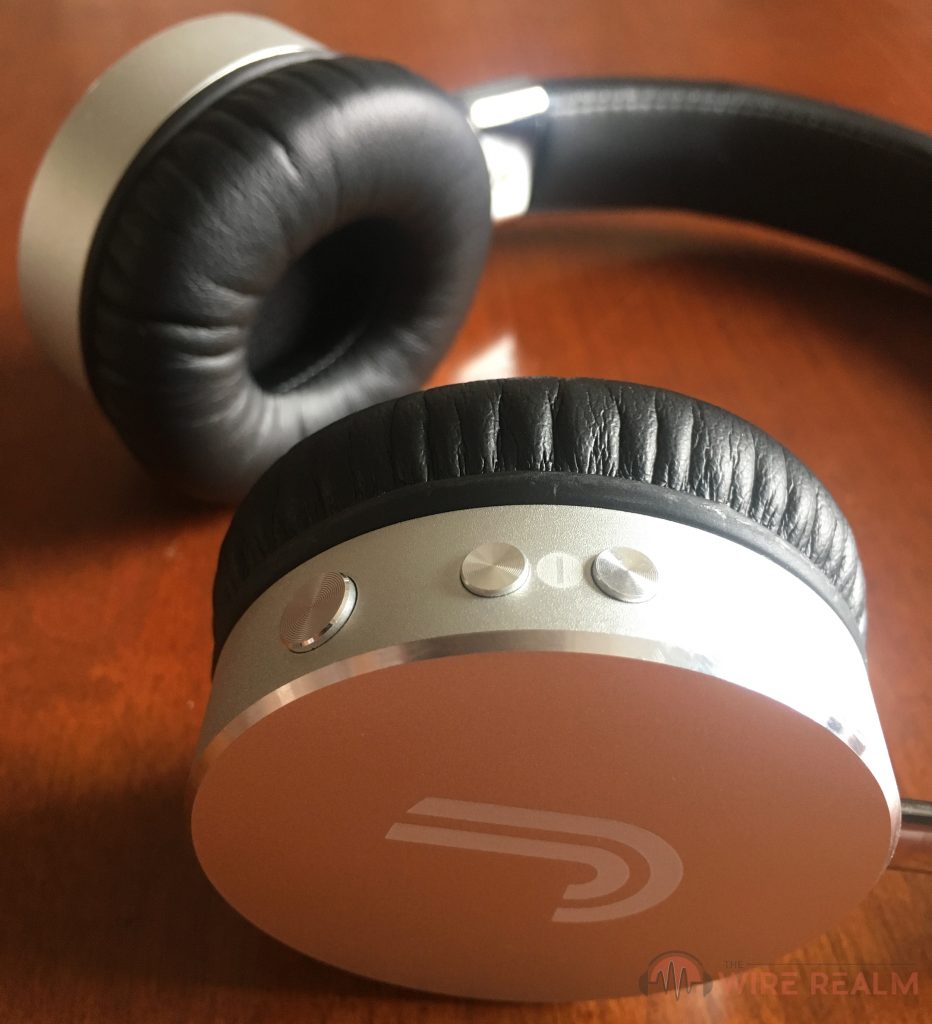 Bluetooth headphones, in particular with an on-ear build, can be hit or miss in our experience. Finding both an affordable (a lot of the popular models hit nearly the $300-$400 range) and solid pair of on-ear headphones with wireless Bluetooth connectivity that provide a great build and at least decent audio quality can be difficult at times. Today we were given a pair of the Fanstereo Studio43 on-ear headphones to write a fair and honest review, and after opening the box, we were very impressed with what this pair of cans brings to the table in the BT on-ear department, especially at an affordable retail price such as this. But how do they sound? Let’s get into the details.

Features of the Fanstereo Studio43 headphones 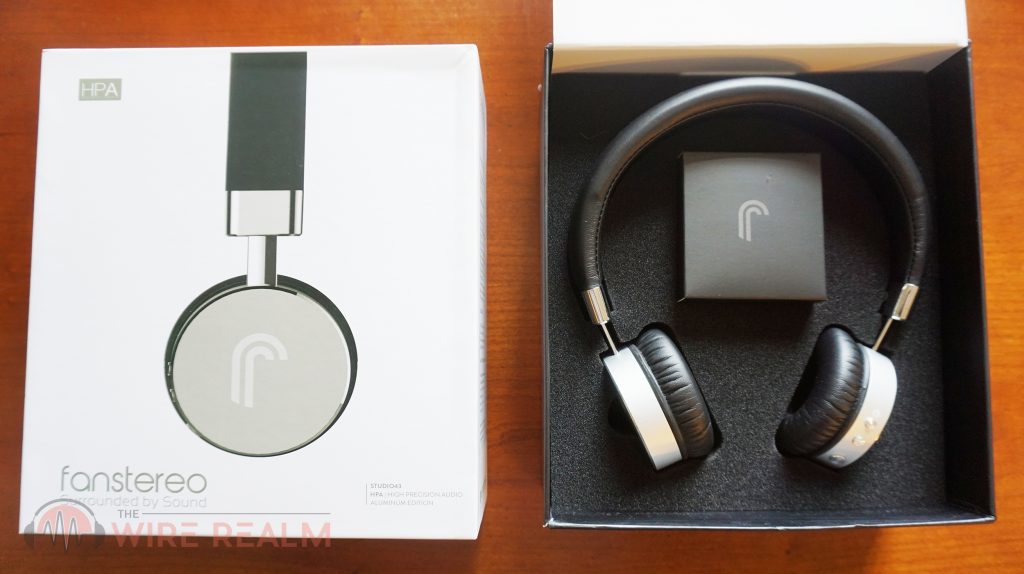 When first opening the box, what first caught our eye was the leather made headband as well as ear cups — these feel extremely soft not only when touching, but of course as they rest on our ears right now as we type this. It isn’t necessarily a “hard” or “stiff” leather (as we’ve felt in a few other ‘popular’ on-ear headphones in the game), but very soft and pillow-like. Since they’re ‘on-ear’, we’re always concerned with certain models that don’t have enough cushion to keep our ears from hitting the actual headphone loudspeaker (yes, it’s happened to be us before). Thankfully we’re covered, as the Studio43 earcups have just enough cushion to rest on your ears without part of your cartilage hitting the hard piece under it all. When it comes to pain, we experienced none, and the longest we used these at a time were for about 4 hours.

Since the headband (yes, adjustable) and ear cups are top-notch here with leather, we were already excited about the build, as they’re the staple-point of the headphones as a whole. When inspecting the casing of the ear cups, we have a nice and sturdy aluminum with no plastic here. The headband is also stable and can bend significantly, an important part for headbands since yes, we’ve snapped a few of ours in our day. We attempted to bend it back and were able to essentially make it straight which in our opinion passes the stability and flexibility test. The adjustability of the headband is also quite easy to customize and is very smooth, although it isn’t stainless steel and too ‘rugged’, it still includes a sturdy plastic (aluminum only for ear cups) that isn’t flimsy but isn’t necessarily military-grade either. Overall, we’re very happy with the Studio43’s build, especially the leather (we’re suckers for leather cups and bands — you can never go wrong).

The Studio43 weigh about 162 grams (5.7 ounces), so they don’t feel clunky on our head at all. When swiveling our head back and forth as aggressively as we could, they didn’t fall off, but did start to move out-of-place after a while. On-ear headphones in general aren’t known for staying put, or at least compared to over-ear headphones since they actually cup around our ears as opposed to resting on top. However, if you plan on moving around with the Studio43 in more non-exercise activities you will be fine. We’d even say you could run with these on, however anything else that involves moving side to side or different directions, such as weight lifting or sports, you should probably stick to in-ears for that. 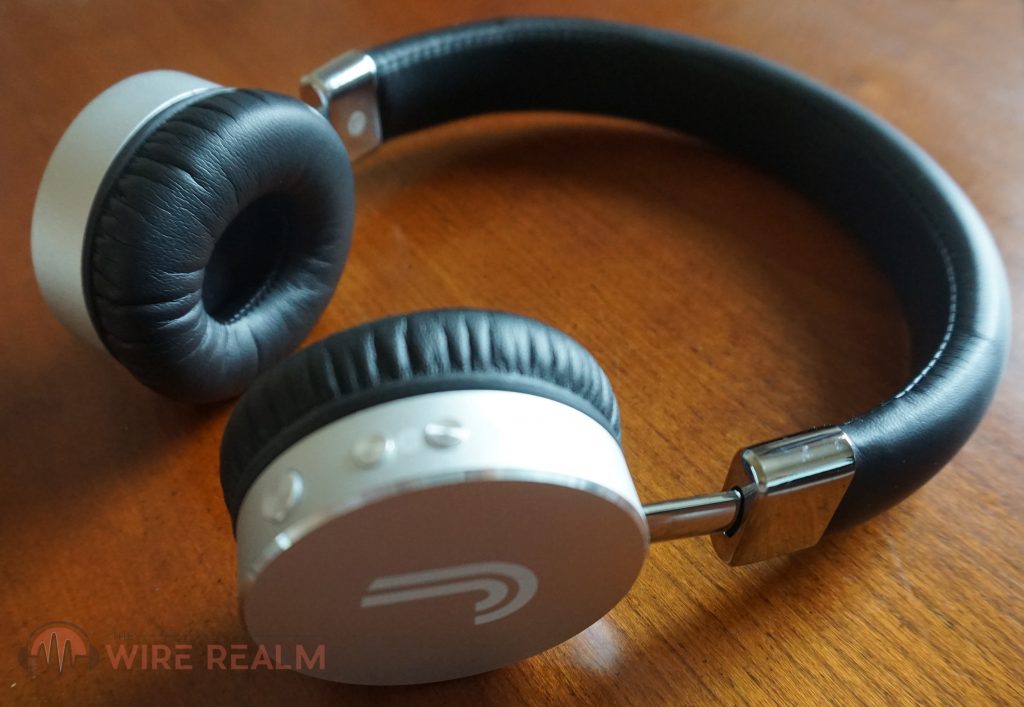 The headphones did not come charged when we first opened up the box, so make sure you’re set before leaving the house or plan on using these while work or leisure. We checked the charge time with a Micro USB (yes, comes in the box) hooked up to our PC and it only took about an hour and a half for a full, 100% playing time. When actually using the Studio43, we accumulated about 12 hours of play time (mostly at 70%) before they died. When seeing how the range stood up, Fanstereo states they’ll operate at about 35 feet, but we tested it all the way to the other end of the building and were able to listen to 38 feet until we started to experience some disruption.

When pairing, press the larger, multi-function (MF) button and a male voice will say “power on” (hold it for 5 seconds). The headphones will then automatically begin to attempt to connect to a Bluetooth device. Once in your BT section of your device, select “STUDIO43” from the list and a few seconds you should hear that same male voice state, “your device is connected” and your’e done. This was extremely seamless and easy for us, and turning it off and on through out the week, our smart phone automatically paired up when the headphones were turned on.

The controls on the right ear cup may first confuse a few of you, however learning them isn’t hard at all. It takes a super “quick” tap to change volume, a double-click will change the track, and pressing both the volume up and down buttons at the same time will mute the mic. To test the built-in mic, we had a colleague call our phone and we used the controls on our right ear cup to answer. Our caller was able to hear us feasibly, and we had no problem conversing for about 10 minutes with the headphones on. We even walked away from our phone and had no problem speaking as long as we stood within the 35-40 foot BT range.

Another big feature of the Studio43 is the voice command function, so we wanted to give it a go and see how it went. All you can do here is either answer or decline a call when you’re receiving it — simply say “yes” or “no” it will do as you please — we tested this and it worked well. There are no other ‘voice commands’ available, such as play, pause or skip track, but we’re fine with that since merely placing our hand on the right ear cup is already quite convenient, and sometimes we’re not in a setting where we can talk. You can also end a call by pressing the MF button once, or reject a call by holding the MF button for 2 seconds. 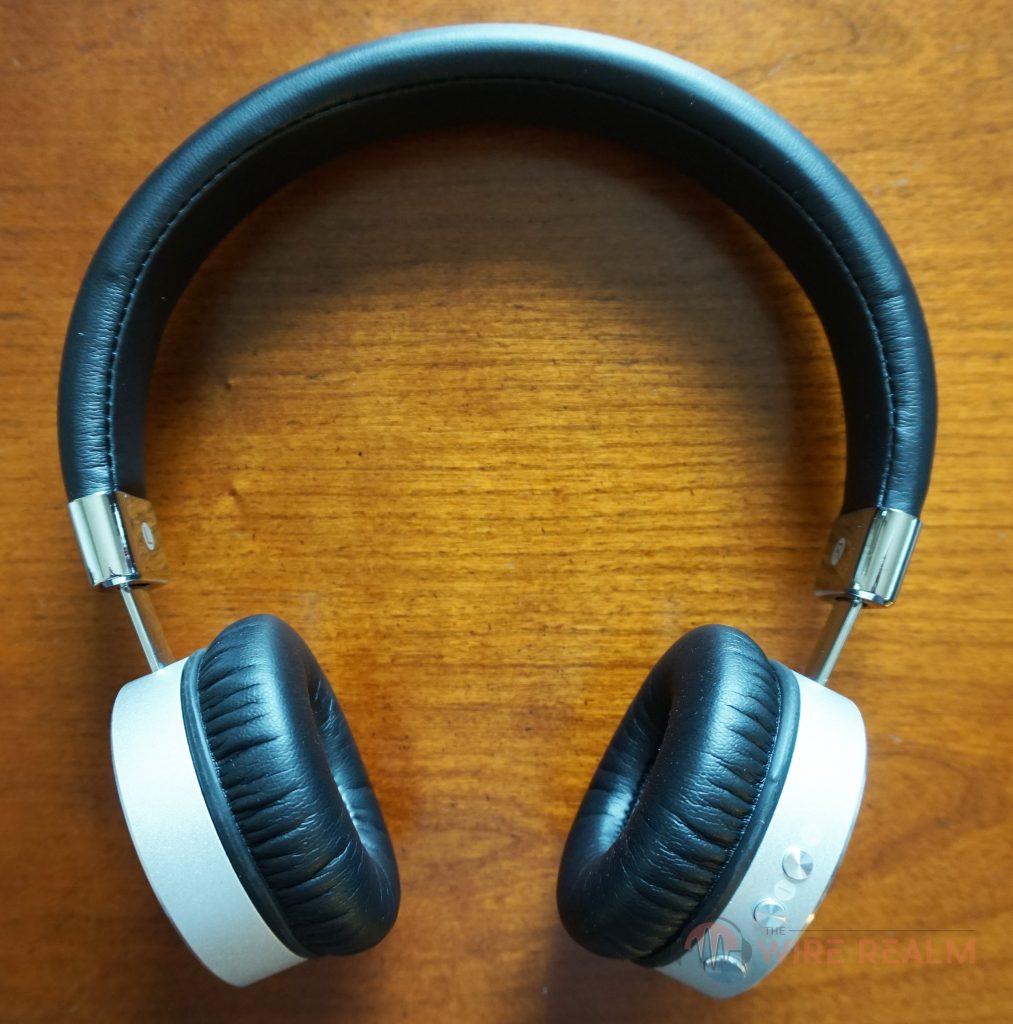 So how do these on-ears sound? When it comes to power, they can get loud. Ultimately at full blast, it was too loud for us and we had to settle back down at 70% (of course, everybody’s ears are different when it comes to tolerance, but we of course recommend be safe and never listen to anything at 100%). The volume control on both my smart device and the Studio43 were actually synced, which we really liked because a lot of BT devices can have separate volume levels and you’ll have to either adjust both levels or line them up, which can get annoying at times.

In terms of frequency distribution, we listened to quite a few different genres to test how they held up when it came to highs and lows. For some hard-hitting songs, we felt a good blend of the bass with snares entailing very little bass embellishment, and for piano ballads we had a nice, relatively warm sound to it. They aren’t necessarily as crisp as some other specialized ‘monitoring’ headphones (our ears are normalized to this clarity since we’ve been reviewing a few of them), but for the price and considering these are Bluetooth, we’re quite impressed with the tone and feel of the sound quality and we actually think they rival some lower-end studio headphones in the game.

Next we’ll analyze sound isolation. For keeping outside ambiance and noise away, a big test for us is to listen to our typing. We can only slightly hear the keys being pressed, and although they aren’t as isolating as in-ear headphones, get the job done when it comes to wanting to use these in louder environments to keep to yourself. We also went outside near a gardener blasting a leaf blower and yes, could slightly hear the tool, but it didn’t completely take away from the current song playing.

At the same time, we’d like to analyze sound going out, and as expected with most on-ear headphones, isn’t necessarily ‘the best’ from disallowing sound from leaking to the outside world. We had our colleague try the pair on while music playing at 80% and we could in fact hear what was playing, until about 5 feet away in a quiet office. Of course, this expected with this type of headphone build — we wouldn’t recommend any on-ear headphones, regardless of price, for complete depletion of sound leakage — they’re of course better than open-ears for this, but in this case it isn’t as feasible as closed-back, over-ear headphones, especially for recording. With that being said, we still recommend going for over-ear studio headphones in a home studio. These are more geared towards those leisure listening when it comes to music around the house, in the office, traveling, or perhaps watching TVs or shows on your computers, laptops or even TV. 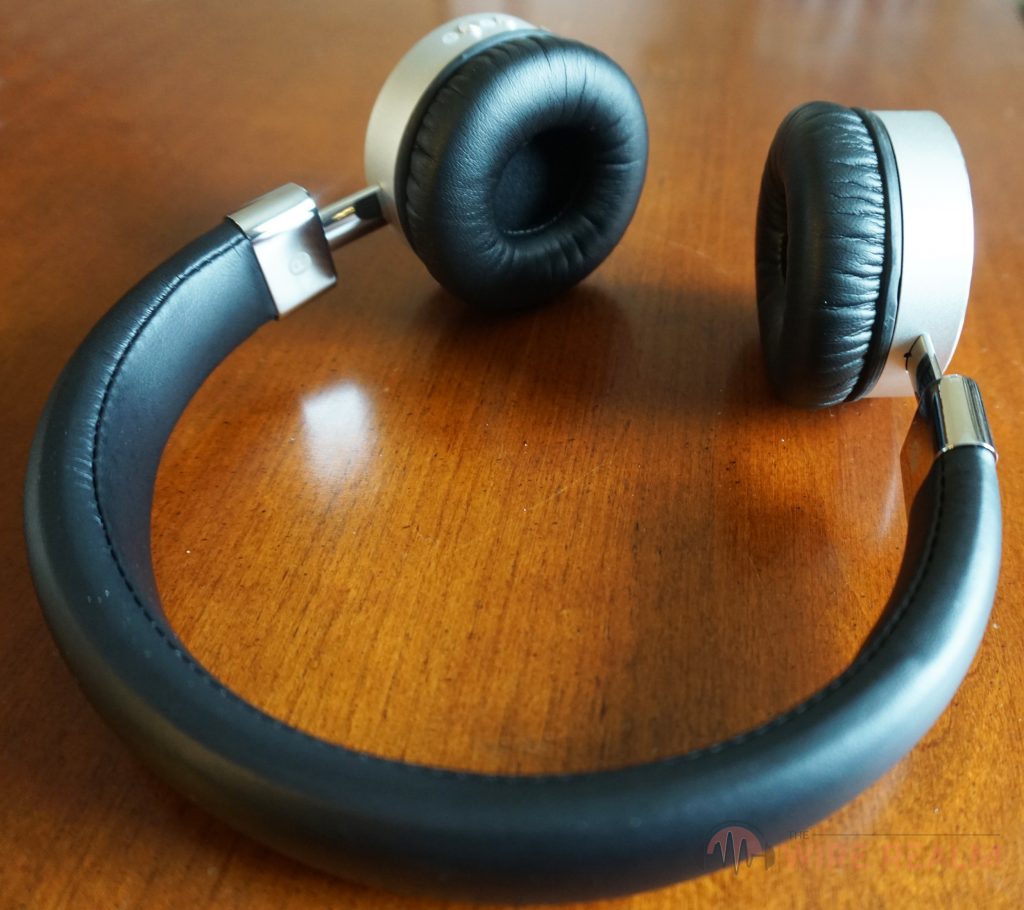 When it comes to cons, there may be a few for some, but to us you can work around them. The leather as well as aluminum casing for the ear cups is great, however the actual interior build of the adjustable headband slider isn’t metal, so just be careful when you’re tweaking the fit. We tried to bend it to see how it would hold up and it almost snapped, but for this price we’re even surprised they included leather and aluminum while remaining so affordable. You start to get into the $300 range for higher-end adjustable sliders.

No, the battery is not detachable so you will not be able to replace it. In fact, none of the parts here are interchangeable or replaceable so if you break it you’ll have to grab a new pair; however, with the build quality of this you’ll be fine for quite a few years as an investment if you take proper care of them. Also, the lack of “voice commands” aside from “yes” or “no” to end calls may irk some, especially into smart electronics — we’re not really on that trend yet especially when it comes to headphones. We don’t really see the point of it, unless you’re using a home speaker or something like that. The “yes” or “no” commands just adds a nice touch to us, but if you want more you’ll have to look elsewhere.

All in all, the combination of the build, sound quality and very easy-to-use control center on this pair of on-ear headphones make these a great buy if you want some BT on-ears in the lower price-range of the category. Anything else priced lower starts to get into some cheaper-made models, and you’ll begin to sacrifice some essential functions we feel are necessary to make a pair of wireless headphones worth it. This includes playing time, BT range, ear cup and headband material, overall casing make, and of course, audio clarity and resolution. We feel the Studio43 brings a nice balance of all of this, especially with their HDA technology built inside.