Just when we thought we’d been overly-impressed by Audio-Technica, we’re hit with a big release at the NAMM show this year. New for the year 2015, they’ve added an even higher version to their ever-growing in popularity M (stands for Monitor) headphone line: The Audio-Technica ATH-M70x Headphones. We had a chance to try these on and give them a listen, so we wanted to share with everybody our findings (jotted down our thoughts quickly in a handy notebook beside us). Although we’re huge AT fans, we will admit that we were skeptical considering these are entering the price range of some of the heavy-hitters out there (looking at you, Sennheiser and Beyer). So what’s the verdict?

The M70x are closed-back design, so they help keep sound from leaking out of the earcups to maintain sound isolation. This is especially useful for recording vocals or other instruments because no extra-noise will bleed through the headphones and into the microphone to mess up the recording. Even though AT markets these for engineer’s as well, we’d recommend a more open-design of headphone for that. Those do a better job at allowing a bit of sound to leak out to prevent ‘sound buildup’ and provide a more accurate mixing environment, so check our best headphones for mixing and mastering article for alternatives if that’s your need. Otherwise, the ATH-M70x are pretty much good to go for any other activity and use out there.

We’d say the ATH-M70x is mostly for those recording music (vocals or merely any instrument in general), DJ’s, podcasters, travelers (due to the nifty case you get) and everyday listeners (the interchangeable cord is great for this, as I’ve heard my friends use the longer cables to hook up to their computers and lay in bed to watch shows and movies). As per their previous models in the m-line, the swiveling earcups (included in the M70x of course) is also a plus. In that sense they’re great for DJ’s, as we saw their M50x make an appearance in our best DJ headphones article.

One noticeable difference between these and their other monitor headphones is that they do not collapse. I’ve heard mixed opinions on this but it seems to be that many don’t mind — sometimes it would get annoying or some people didn’t even collapse them at all (although I did for storage purposes). As for the detachable cables, you’re getting the essentials (as seen in their other packages as well): a long straight (9.8″), long coiled (9.8″), and short straight (3.9″).

One of the biggest standouts in terms of other extra features is the carrying case included. We can’t tell you how many questions we had regarding the best case for their other headphones, so we typically resorted to a no-name cheaper brand found on other websites. However, this has it’s own personal case that it comes with; in result, it’s not only saving you money there (does the case justify the high MSRP? not quite) but adding confidence if you’re planning on traveling with these bad boys. As seen in the photo, they fit snug with an extra pouch in the middle for your cables. It’s 10x the quality of the other travel solutions that came with their monitor headphones which gave us only a cloth traveling pouch. 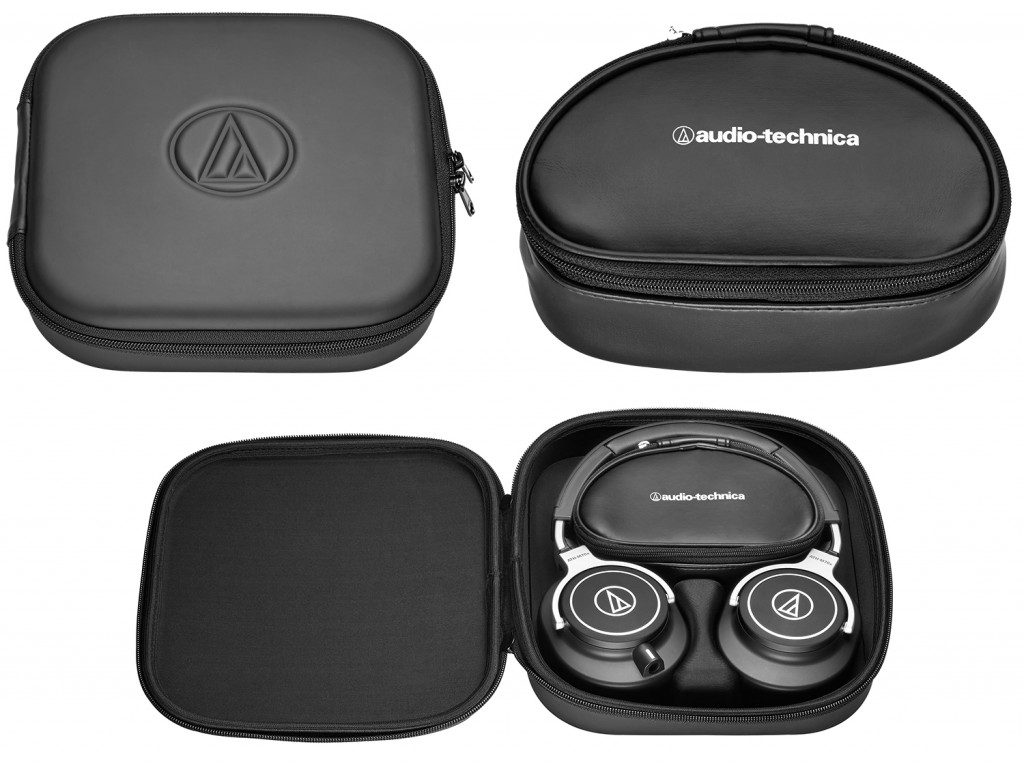 These are definitely ‘studio headphones’, particularly made for those recording who need sound accuracy — they’re tuned super flat to give you a true sound for all your mixes. This means that all three levels of frequencies have the same amount of emphasis. This is compared to some Beats by Dre headphones or other heavily marketed headphones with the word “studio” in them — a lot of those have a bit of a boost in one or more of the frequencies (typically the lower end), in a sense defeating the purpose for including them in the ‘studio headphone’ discussion and used merely as a marketing term.

In terms of a quick comparison of sound quality with the M50x’s, the sound is pretty noticeably different (although not necessarily twice the price different); there’s a bit less bass (in our opinion) because we heard a slight compression and boost in the M50x. If you didn’t notice either, the frequency range is a lot more broad, ranging from 5 – 40 kHz as compared to the M50x with 15 – 28,000 Hz — super wide and great for those who want to hear the whole picture being painted. 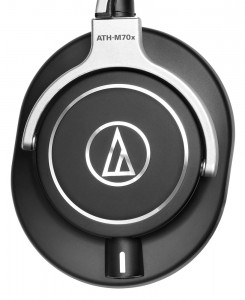 The soft leather headband and ear pads were huge hits with the ATH-M50x and these are no different. If you were wondering if there’s a difference between the two, we felt none; however, that isn’t necessarily a bad thing. It’s more of a why fix what isn’t broken type of situation. I’ve heard of a few people complain about the ‘cheap pleather’ of the M50x, but we respectfully disagree. These are some of the most comfortable pairs of headphones we’ve felt in this price range (you can’t genuinely compare these to more expensive studio headphones that have real leather make — those cost twice as much). You will not experience pain after long use with the ATH-M70x either — the ear pads and headband are super soft.

Aside from the comfort and in terms of build, the ear cap, ear yolk and overall top of the cups are made of a nice metal. This is an upgrade from their previous models and we’re quite happy with it. They aren’t going to break on you easily if you drop them, and as long as you take care of these you have a nice investment on your hands for many years to come.

The final word on the ATH-M70x headphones

We wouldn’t go by a lot of thoughts we’ve read around the net upon A-T’s first announcement of the ATH-M70x. One of the most nagging parts of consumer’s first opinions (when all they have are pictures and feature lists to go by in message boards) is their nose-in-the-air attitude when it comes to price. To put it simply, and as compared to the M50x, you’re getting: a wider frequency response, slightly more accurate sound, better quality carrying case, higher quality components and build, but also all of the features you loved in their previous models (aside from the lack of being collapsible).

Is it worth spending the few extra bucks? It’s your call, really. We’re happy with what they’ve brought forth this year. In our opinion, it isn’t a must in terms of upgrading if you already have a pair of their monitor headphones, but if you’re still shopping and have some money saved up, it’s more of a why not? You may even want to pair it up with a headphone amplifier and see how much power it can really give you. 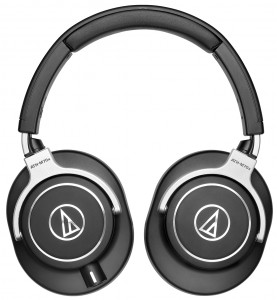 One of the bigger reasons we stated their previous M50x model rivaled a lot of the big names in the studio headphones world was because of their price; it was relatively cheaper than those within it’s sound quality class. Audio-Technica is starting to tread in the waters of some of the bigger names, and this particular model comes close (in our opinion) to top-rated studio headphones such as the Sennheiser HD6– and Beyerdynamic closed-back models. For some other alternatives, you can read our top 10 best studio headphones article.

All in all, if you’re concerned with your wallet, we’d say just stick with the M50x or M40x. However, if you’re going to go big and want a serious pair of headphones that are perfect for recording music (or just very high-quality for everyday use), the Audio-Technica ATH-M70x Studio Headphones will not disappoint. It’s their flagship model of their monitor line.