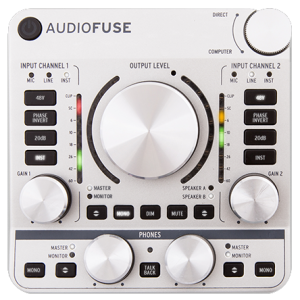 We’ve all mainly known Arturia music gear for their amazing synths and software sounds, but they’ve recently come out with an intriguing audio interface that we just couldn’t ignore. It’s considered “next-gen” as there’s nothing quite like it out there at the moment. Some MOTU models perhaps can compare, but this particular interface is made for consolidation and basically jam-packing every and anything you can think of that can come with an audio interface. With 14 in\out channels, 4 analog in\out and 3-port USB hub, this thing may have too many features for you, which is never something to complain about when it comes down to it. Let’s look at it in detail.

Well, as you can see from the bullet point list, this thing is jam-packed with just about any type of port, in\out or knob you can think of. First and foremost, it’s a 2-channel interface so that has a lot of heads turning. We feel that’ll be the biggest “should I get it?” feature for you to take into consideration — do you even need two channels (or will you in the near future?) If so, continue on!

Aside from the bullet point list above, what’s great is the direct monitoring, A/B speaker switching, and our favorite, the talkback feature with a mic inside of the unit itself (depends if you use communication between your booth and engineer). The front has some convenient controls and we had no problem navigating around it. You’re getting a master out level (biggest nob), a gain knob for each channel, indicator lights for the channels, and more.

Another huge plus is the fact that the drivers work with pretty much every device out there: PC, Mac, iOS, and even Android and Linux. So if you’re one of the fresher iOS producers you’re good to go here. Oh, and not that it’s too big of a deal, but it comes in three different colors as well: silver, grey and black. Why not?

The preamps are “DiscretePRO” made, which by the looks seems like another fancy word for technology. However, upon further research, it’s a particular build of pre-amp that only Arturia is using at the moment. It’s stated to amplify a microphone in more of an analog console method (Arturia is known for their analog style). Although these are merely claims by the brand, they state to use an APX555 testing instrument (an audio analyzer) for verifying the accuracy of their preamps. Regardless if this is actually true, what’s most important is that the DiscretePRO amps give a more warm sound as opposed to the super digital (hello Apogee) interfaces that are ever so popular. We’ll take it.

The latency is unnoticeable. If you can tell the difference between 0 and 3 milliseconds, I will personally Paypal you $20 right now! I mean, that’s starting to compete with Thunderbolt connectivity speed. Even if it is a bit more (perhaps 8 ms like the Focusrite?), it’s still feasible for a USB interface. You aren’t getting any lag or delay with this thing when you hook it up to your controllers or other gear unless you’re relatively picky. The comments over at Synthtopia were pretty harsh on this.

Sample rate numbers are always important. Although we think even the medium price-point interfaces nowadays give us semi-pro audio quality, going above the norm will never hurt. With the AudioFuse, we get 24-bit sound here (AD/DA converters) and drum-roll please, up to a 192kHz sample rate! A lot better than the lower-priced interfaces out there. You’re great in terms of quality (although it isn’t quite the level of Apogee). 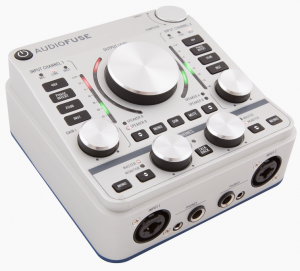 Arturia always comes with super solid builds of their gear. Besides Akai, we think they’re one of the highest quality in terms of overall stability and material. It’s one piece of aluminium chassis so it’s very well built, the POT are great, solid connectors, and it has seven electronic boards inside. It isn’t jacked up in price to “appear” high-end — it is high-end. AskAudioMag’s write-up on the AudioFuse raved about it. It also has a little top-shell (leather covered) to put over the interface itself, so if you’re traveling or merely want to save your unit from the collection of dust in your studio, it works quite well.

The final word on the Arturia AudioFuse audio interface 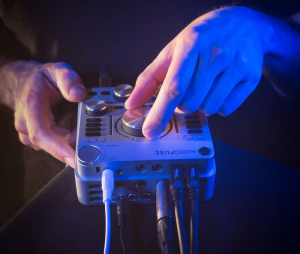 To be honest, this thing is on another level. The only reason you should complain is the price. However, if you are already aware of what other audio interfaces cost, I really don’t mind this being almost twice the price tag because you’re getting almost twice the capability. This definitely isn’t for a beginner, but if you’re already here reading this article you probably aren’t one. If you are, check out our best audio interfaces article for more suitable choices for you. Otherwise, even without reading this review, you probably already knew how gnarly this interface was. We have no complaints because it does what it states it will do. If you really want and need it, we recommend dropping the cash.

All in all, the Arturia AudioFuse is a beast of an audio interface — in fact, it transcends that categorization in our opinion. They’re starting to rival Apogee when it comes to the higher-end interfaces, and they’re doing a good job. If the features attract you and you have the cash, don’t hesitate in grabbing it.