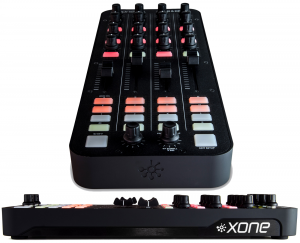 One of our favorite creators of DJ equipment, Allen & Heath audio mixing consoles, has come out with an extremely solid piece of gear for DJ’s, the Xone:K1 MIDI controller. It’s a compact, slim line controller that works with any DJ software you have (not limited to Serato DJ like a lot of DJ gear out nowadays). You get convenient access to control your levels, trigger hot cues, add some FX or even instant looping. The slim line make and overall build of the Xone:K1 is exceptionally convenient, and all it can do is put another cherry on top of that solid setup you’ve already got running. I’ve got mine right next to my mixer. Let’s get into the details of the Allen & Heath Xone:K1.

In our opinion, A&H’s quality is some of the best in the music equipment world. Usually their mixers come to mind when we’re talking high-end gear, but their controllers really give the household names a run for their money (Novation, Akai, etc). There are no secrets behind this one as it gives you what you need — a control surface for various functions to really give your custom controls a physical reality as opposed to relying on your software to adjust FX and the like. What’s best about this is that it can be customized to pretty much however you want — it doesn’t limit you at all to what you can assign and what you can’t (if it’s MIDI assignable, it can be mapped).

The Xone:K1 can also connect directly to the beloved DB2, DB4 and 23C mixers if you’ve got one, as well as connect with an additional K1 or K2 controller via X:LINK connectivity (uses a RJ45 connector). It’s not really a necessity, but a plus if you’re looking for even more power than you already have. I’ve seen two connected to a DB4 and wow, you’re set for life.

USB powered is always a nice touch, although if a piece of gear needs an AV adapter I stay away completely being that it’s an archaic feature nowadays. What truly stands out with the K1 is the X:LINK connectivity, slim line and solid build, as well as it being a fully custom control surface. We love it because it does what it does, and we can trust that Allen & Heath brand name at the top of the unit.

Build and stability of the Xone:K1

The Xone:K1 is pretty dang lightweight and it isn’t made of some cheap plastic as some call the Novation models. It has a steel front panel so even if you drop it it probably would only dent as opposed to break completely. The pot construction is also bolted in there pretty well and the sliders are quite slick and don’t get stuck, so no complaints when it comes to the K1’s build — it isn’t some cheap knockoff.

There is also a black padded case available for the K1, although sold separately. We recommend grabbing one of these if you travel a lot like us, otherwise you’re going to have to go with the traditional wrapping-it-around-a-towel approach. The case can also double as a stand which is a big plus and pretty convenient for a setup since it’s the typical height of mixer/turntable stands.

Some other competitors who have emerged in the DJ controller world include the popular brand Akai, recently coming out with their AMX DJ controller and AFX FX surface. Read our reviews to see what those are about, although they are more tailored towards Serato DJ in particular. We’ve heard them work with other software too but not as seamless as the Xone:K1. Many would also prefer A&H’s builds over Akai’s. We agree.

We’ve heard some users complain about the Xone:K1 being a mere copy of their K2 controller but without a sound card. We’d agree, obviously as it is what it is, so if you do want to spend a few extra bucks (about $100 more retail), take a look at the Allen & Heath Xone:K2 DJ controller for a different option. It’s basically the K1 with an audio interface.

We’d go with the Xone:K1 if you’re looking for a solid controller to act as a surface to accompany your mixer and table setup and already have an audio interface. However, if you’re looking for an audio interface as well, combine the two and go with the Xone:K2 to save some money that way. This is also very similar to the Native Instruments Traktor Kontrol X1 MkII DJ Controller, but that’s only recommended if you use Traktor. It also doesn’t give you sliders like the Xone series. Let us know if you have any questions in the comments.

If you need some more options, check out our best DJ controllers article for some other popular models to compare and contrast.