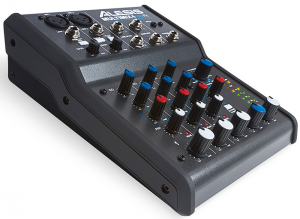 Alesis instruments has come out with a brand new mixer, the MultiMix 4 FX Audio Interface, featuring some powerful capabilities and effects to help supplement and improve home or some professional studios. A relatively standard mixer, we love the overall build and extra spunk this one provides. It’s an upgrade to their popular MultiMix 4 Four-Channel Mixer that we saw receive a lot of positive reviews since it’s release in the early 2000’s. Now they’ve created a better machine with some built-in effects for a pretty low cost, at the same time not changing too much of what we’ve all enjoyed in the original model.

Benefits of the MultiMix 4 USB FX

The mixer has two XLR inputs with a low-cut button on channel one, gain control on each channel and on channel two, you have a guitar indicator so you can lower that impedance. You also have a low-cut, 80 hertz as well. You can also run line quarter-inch into these channels. Channel three and four are handled on a stereo, quarter inch input.

The Multimix 4 USB FX mixer has the main inputs left and right, the headphone outputs, the extension in which is basically an 8-inch TRS for your audio source and external audio source. The mixer has two high and low EQ — so two ban EQ, it has effects saturation on each channel and it also has pan for each channel and of course, channel game. 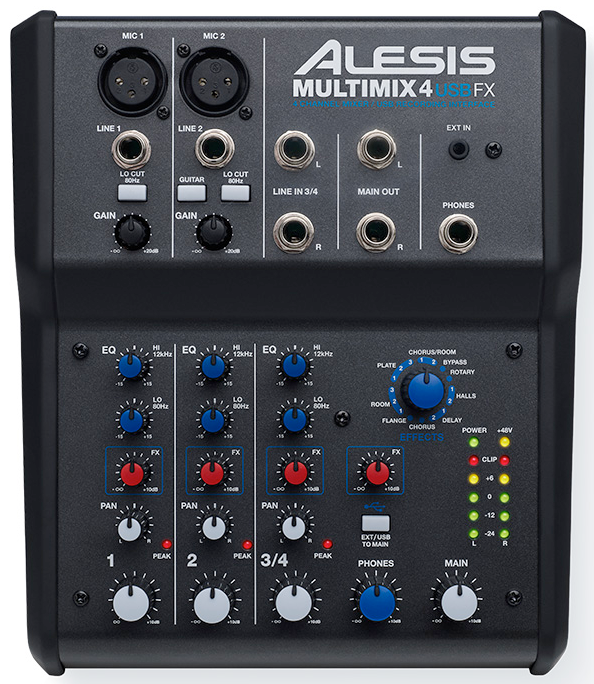 It has fifteen different effects, nine different effect types. The effects are pretty impressive and can be controlled by a simple knob (blue larger knob in picture above): chorus/room, bypsace, rotary, halls, delay, flange, and plate. It has LED indicators for BU in clip, a power indicator and a phantom power indicator.

Here’s the user guide of the MultiMix 4 FX.

The final word on the MultiMix 4 FX

The MultiMix 4 USB FX mixer is a great, simple solution if you’re looking for some relatively standard functionality in a mixer. This newer version is great because it’s merely additional features on an already solid mixer. I’m glad Alesis didn’t change up a lot because you can’t fix what isn’t broken. If you don’t need the extra FX you can also check out their original MultiMix as the price will be dropping (i’ve seen it around $75 on most sites) as this newer version becomes more prominent.

In terms of stability and longevity, my original MultiMix lasted me about 5 years, so if you’re looking for a mixer\audio interface for a long-term investment, this is a great option. Anything higher than this has a bit more pizzazz and some features you may not even need. You can also check the higher version of this, the Alesis MultiMix 8 FX (around $50 more retail).