Announced at Musikmesse 2014, Akai Professional has stepped up their game in terms of sampler recorders and players. The original Akai MPX8 has been a huge hit since it’s release, resulting in the make of this bad boy. They’ve now added 16 backlit pads as opposed to their previous 8 (hence the number in the model), to be able to trigger all sample sounds simultaneously. Here’s the catch and if you weren’t aware of the MPX8 capabilities: the sounds are triggered by an SD card. These pieces of music equipment are relatively different than your average sampler or MIDI device. Let’s take a look at the Akai MPX16.

The Akai MPX16 allows you to put any sample you want on the SD card in .wav format. Whether it’s a drum sound you sampled from an older record, a saxophone hit you found online, or a preset they include with the hardware, you can play it live. Also included on the MPX16 is a dedicated volume control and a variety of effects you can now use on your samples (for example envelopes, filters, cut-off, resonance). But other than that, that’s it.

Main additions and features of the Akai MPX16

Our rating of the Akai MPX16 sampler and player 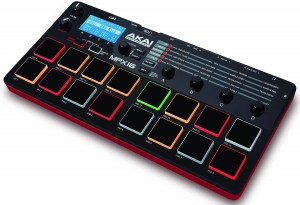 This thing is pretty nifty we’ll admit. Although the newer version coming out is 2 bills, it’s more of a ‘toy’ in our opinion. You’re not really going to use this thing for recording unless you don’t have a MIDI keyboard or pad (check out our MIDI pad article here). It can supplement your studio very well if you’re looking for some pad incorporation.

However, if you do perform live, this thing may be able to save your life. As opposed to merely having a rig hooked up to your computer, you can skip the middle man and just have this piece of machine up there to play with. This could be awesome for drum solos or little sample breaks during your songs. It can also be fun to jam with some friends. I used to take my MPX8 to jam sessions at my friend’s garage parties and I got a lot of compliments because it was equivalent to one of my friends bringing a guitar or a drumset, but I already had all of my sounds handy on my SD card and didn’t need a computer. It’s really fun.

We’ve given it a 4 because it’s super powerful and really convenient, especially if you want to get creative with that included mic and sample your voice, although I didn’t try it when I was playing around with the rig at the show.

Pad quality of the MPX16

With a device dedicated to MIDI pads, you would hope this thing came with some great feeling buttons, and indeed it does. We wouldn’t say they are completely MPC quality, but they are a lot better than their MPK keyboards. They’re very sleek and aren’t too soft or too hard and when we played with them the velocity sensitivity was just right. The MPX8 was a great success and they haven’t tried to change too much of the device. In terms of pad quality, these are better than a lot of dedicated pad controllers out there. You’ll be satisfied.

The software that comes with it is average — nothing to be too crazy about; however, we only recommend using it if you don’t have your rig set up yet. I like to get my sounds ready before I transfer them over but it’s really up to you (I have changed my mind a few times and edited them on the MPX16 itself). I’ve gotten pretty creative over the years as well, sampling sounds from the TV, movies, and even outdoors when I was bored and went to the beach (I should probably upload that track to show you guys).

We personally use Ableton and were able to get it working in it flawlessly. It has very great integration with merely any digital audio workstation that you may be using, specifically with Logic Pro, Ableton, and Pro Tools. This should be assumed being that we’re in 2014 and most setups are digital. You’re good here in terms of mapping.

The effects are actually pretty nice, albeit rather basic. You have your few envelopes, filters, cut-off and resonance, so nothing too absolutely mind blowing but a nice little touch they’ve added in case you want to filter some of your sounds and warp the feel of it.

Overall verdict of the MPX16 by Akai

If you’re looking for a new MIDI pad controller, this is one to give serious consideration. I’ve done so much comparing and contrasting with different brands and models (check out our best MIDI pad controller article) to where anything Akai gives me that feeling of security — you can always trust them. Their price tags are usually a bit higher than some others out there, but for a good reason at that and it is justified. The builds of their equipment last me years (my MPK for about 3 now), so if you’re looking to invest, Akai is always a safe bet.

If anything, just make sure to check out the prices of the original Akai MPX8 pad controller if you want to save money since the price will be dropping as it ages. If you want some more features in a pad controller, you should also take the MPC Element a good look (it’s $50 cheaper, has some different functions in it but the pad’s aren’t as nice). Or you could even take a look at our Arturia Beat Step review as that has a built-in step sequencer if you’re geared more towards an all-in-one piece of machinery.

After some other research and interactions with readers and gear junkies, a con of the MPX16 could be the fact that it takes a few seconds to load up the banks, which may disable you from using it as your main source of sounds. I’d recommend using this as more of an accommodation to your setup, particularly for live performances.