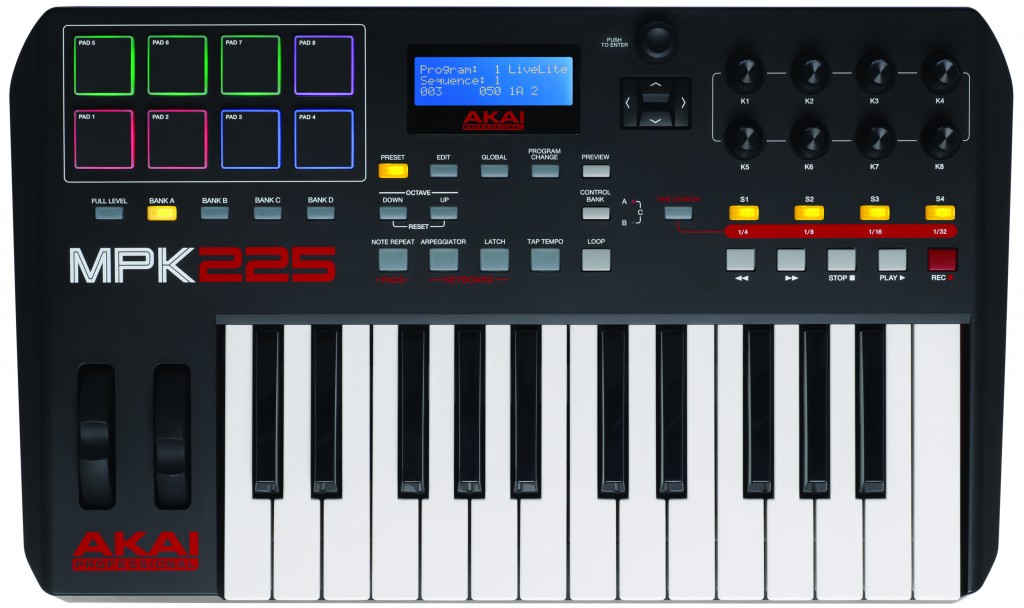 Akai Professional released information at this year’s NAMM about their MPK II series of MIDI controller keyboards with some decent upgrades to their popular models. We saw in our MPK249 review that the main upgrades included the improved LCD screen, the backlight RBG LED lights on the legendary MPC pads, as well as a slimmer design and more ‘comfortable’ keys. Pretty much the same tech has been improved in this 25-key midi controller, a step up from their great MPK25 USB MIDI controller that has been quite popular since it’s release. Let’s get down into the details.

As stated previously, Akai hasn’t necessarily added some innovative, life-changing tech. This particular USB controller involves some tweaks and upgrades here and there. Here’s a list of everything has improved since the MPK25:

Akai has also decided to include some pretty advanced software with their new MPK II series of USB controllers. The MPK 225 comes with Ableton Live Lite, SONiVOX Twist 2.0 and lastly, their Akai Pro MPC Essentials software (as seen in the MPC Element). Here’s when the “is it worth it?” question comes into play here. It’s first of all up to you in terms of how many keys you want to be included in your USB MIDI controller. This retail price of $249.99 is $150 cheaper than the Akai MPK249, so can you take the hit in key amount (24 keys) for a savings of $150? Aside from this, do you need new software? One of the key components of the upgrade is Akai’s inclusion of the numerous software types listed above.

Mapping your sounds, VST’s and effects via the MPK225 quite honestly depends on the software you’re using. I’ve had great experience with Logic, Ableton, and even my old Acid Pro software I use from time to time. The MPC Essentials is some of the easiest mapping I”ve seen when it comes to sounds, but that’s only if you plan on using their software that comes with it. If you’re looking for the overall MIDI capabilities of the MPK225, you’re quite fine there. Knobs and faders work as intended as well. My mapping has been seamless in Ableton.

The build of these MPK keyboards are great. They are a little heavy but that’s because they aren’t made of cheap plastic. If you’re performing or merely traveling with it in general, it isn’t as light as some keyboards out there. However, for that cost, you get a build that isn’t going to go out on you. This will last you quite a few years.

The key make really depends on your cup of tea, but if you aren’t too experienced when it comes to certain builds of keyboard keys (full-weighted, synth-action), these are great in terms of being around the middle. Semi-weighted is the norm in terms of MIDI keyboards. It doesn’t have that crazy full weighted vintage piano feel to it, but those use those mainly play…you guessed it, piano. This key make (semi-weighted) is best for the majority of us, and those who use VST’s in their computer rigs. I like the build of their keys — they aren’t plastic either (I’d hope so considering the price of these things). They suffice.

Quality of the drum pads

I’ll be honest, there are some higher quality pads available, but these are typically found on the more expensive actual MPC drum machines themselves. MIDI drum pads, which focus on the pads themselves as the centerpoint of the gear, also tend to have higher quality pads on them. There have been some complaints about the velocity-sensitivity of these things as compared to some other strictly MIDI pad controllers. However, and to argue against this, the pads are still doable. To make it a bit more sensitive to velocity, I turned the velocity off completely at times and add a trigger to a soft and loud sound next to each other. Not that it doesn’t have velocity sensitive entirely, but sometimes you do have to bang on the pads a bit hard. I wouldn’t say this turns me off completely, however.

Do you think the upgrade is worth it? We’re not too sure if you already have the (now) older MPK25. If you really need the backlit pads, slimmer size, and additional software Akai is handing out, be our guests. If you’re looking for a MIDI controller in general, we do think it is worth it as compared to some of the competitors and brands out there in the controller market, especially because it is the same price as the MPK25 (as of now, they will most likely start dropping the price as time goes on). We are huge fans of Akai and love this piece of equipment, especially if you are looking for a 25-key USB keyboard. Take these new features as well as your sure need of the software into consideration before buying the brand new Akai MPK 225. You can also take a look at the new Alesis VI25 MIDI keyboard that comes in at half the price with a lot of the same features, just a slightly cheaper build. Also don’t forget to check out Akai’s compact 25-key model, the Mini Mk2 MIDI keyboard (around $150 cheaper, but with smaller keys, less software and a few less functions).

If you’re looking for a new keyboard in general and want to compare and contrast, check out our best 25-key midi keyboard controller article.

Compare Prices of the Akai MPK225