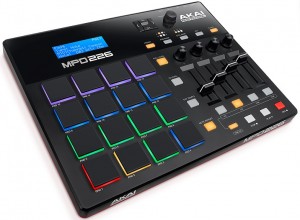 One of our favorite brands, Akai Professional, has come out with three new MIDI pad controllers for us to play around with. Nowadays, us producers usually use a MIDI keyboard that already has pads alongside it as opposed to a piece of gear dedicated to only pads. However, what about an extra upgrade in terms of pad feel\make? What about some extra faders, knobs and buttons to assign sounds\FX to? In this article, we focus on the middle model of their brand new MPD2 series of controllers, the Akai MPD226 MIDI Controller.

Main features/specs of the MPD226 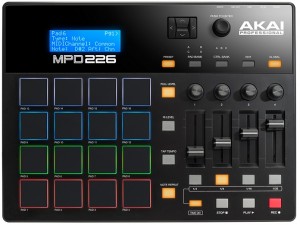 First and foremost, the pads on these things are some of the best out there (unless you’re comparing it to a real MPC drum machine, then you may have some trouble there). Akai advertises them as “Thick Fat” and describe them quite well — you can always trust this brand when it comes to pads considering it’s been their forte for decades. The velocity and pressure sensitive features only add to the natural sound when you’re playing — it’ll send in data based on how hard you hit them so it’s not robotic, giving each hit it’s own volume\flavor. They’re also RGB illuminated which isn’t necessarily a must but makes the aesthetics really stand out in your studio or if you’re planning on being on stage. It can also help you remember which pad is which if you need some aid in that category. 16 nice quality drum pads with 4 possible for a total of 64 different sounds? We’ll take it.

Aside from the important pads, the Akai MPD226 is a bit higher priced than others due to the faders, Q-Link knobs and buttons. You have 4 of each and 3 banks for a total of 36 assignable controls in all. We love using faders for some FX processing and what not, or use the buttons to quickly add some resonant filter on a sound. 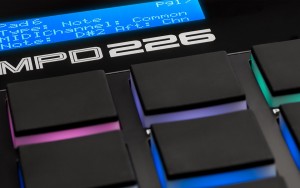 As you can see from the photos, this thing looks pretty slick. The other buttons are also backlit and you have a small screen up top for some navigation. The entire machine is super slim for easy placement in any setup really. Akai’s knobs and buttons are never flimsy (we’d hope so for a few Benjamins) so we never really have complaints when it comes to writing the ‘build’ section of our Akai gear reviews.

In terms of longevity of the MPD226 controller, Akai gear has lasted us 5+ years (if you take care of it — aka keep it safe in your studio or if you’re traveling, wrap that thing up!). We wouldn’t worry about investment if you’re buying this over another pad controller; it’s unfortunate it doesn’t come with a case, but we’d at least think it can fit in a laptop bag or something of that manner.

We were a bit skeptical when it came to the software bundle in their flagship model, but with the price of MPD226, we’d say this makes it really worth it. You have solid drum and percussion sound VST’s to use right out of the box: Sonivox Big Bang Universal Drums and Cinematic Percussion. If you’re looking for a digital audio workstation, Ableton Live Lite comes as well which is perfect if you want to try it out and see why everybody calls it the best DAW out there. Lastly, and just as a plus, MPC Essentials software comes along with it all if you feel like testing out their version of some song making software.

The final verdict on the MPD226 MIDI controller

This is in our opinion one of the best pad controllers out there when it comes to pad quality and overall features and will be for some time. Considering the price, you get a tad bit more features (the extra assignable controls) as opposed to merely pads to play around with as well as a software bundle at a price that fits the mold considering it also comes with Akai’s solid build. If you want to read some of the gear head’s opinions, check out the MPD226 thread over at GS.

As stated previously, this is literally the MPD232 MIDI controller without the step sequencer and half the amount of assignable controls (still a feasible amount). So if you’re looking for a feature-packed pad controller with extra knobs, faders and buttons with sweet feeling pads to play with and don’t necessarily need a step sequencer, grabbing this will save you around a hundred bucks. It also has the same software bundle so you’re really not missing much, especially if you use a digital audio workstation for making your tracks and find step sequencers to be archaic in this day and age.

The Akai MPD226 MIDI pad controller is definitely worth the money.