I’ll admit that I was a bit skeptical when these first were announced. I’ve been a huge MPC drum machine fan since high school, and when Akai said they were releasing some headphones I didn’t know what to think. The price tag especially was what concerned me — $200 retail? I’m a bit of a studio headphone snob, so I wanted to get my hands on these and see what they were about. I was most concerned with the audio quality and overall build of them. Let’s see how they pan out vs. some of my other favorites in the market.

Main features of the MPC headphones

Overall build of the MPC headphones

So lets get into the build and make of Akai’s headphones. As soon as I picked them up I knew they weren’t some cheap plastic ‘studio headphones’ made by a knockoff. Akai again has impressed me with the materials they use — they aren’t too bulky either. I like my headphones a little more solid as they feel more snug on my head and these do just that. The exact construction is aluminum and steel. Robust build. Pretty lightweight at 13 ounces too. 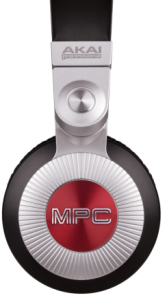 The 50mm neodymium drivers are pretty top notch. A lot of the other brands out there equip their studio headphones with 40 or 45mm, so even that extra 5mm can make a difference if you’re trying to find the best of the best. When I worked with these headphones on and was putting together a mix, the sound did feel very accurate. There were no imbalances between the high, mids and low frequencies at all. The sound quality of the Akai MPC headphones are very satisfactory, and just a slight better driver-type than others ($200 better? your call)

So these are supposedly for mixing and mastering, but I wouldn’t constrain myself. The incorporation of the microphone is a plus if you’ll be using these outside of the studio. They may be a bit too luggy for you to wear at the gym, although I wore mine a few times and I was fine (only lifted weights, didn’t run). I eventually decided not to wear them working out because I didn’t want to sweat on them ($200 isn’t worth shortening their life span).

The MPC headphones compared to competitors

So here’s the biggest question and that is if they are worth the money and overall better quality than other competitors. Are the MPC headphones worth the $200? As far as build and sound quality go, yes. I was hesitant at first but am pretty satisfied with my overall purchase. However, I would like to add that there are some other headphones that are slightly cheaper than these that can suffice (albeit have maybe 5-10 mm less drivers, which isn’t too noticeable) if you’re looking to save a little money.

Try checking out the Audio-Technica ATH-M40x and ATH-M50x. I would also stay away from the Beats by Dre headphones, especially the Studio model as they’re way overpriced (unless you really want them to be wireless). Or view our best studio headphones article for some other more affordable options that offer almost as much power.