There are times when we let the particular idea or melody determine where we go in regards to structure of a song, while sometimes we just like to sit down and make that specific formula. Structuring a song has a pattern to it, just like anything in life. Most of your popular songs have a certain structure that they all have in common — in fact, most pop songs use literally the same song structure every single time and many doesn’t even realize it. This doesn’t mean that you can’t structure a song any way you like, but popular songs do follow a pattern. Learning song structure is the key to being able to make music that people actually want to hear, especially if you’re just starting out learning to make music in general.

For example, we will look at things like the intro, the chorus, bridges and verses along with pre-intros, pre-chorus, and the pre-bridge. Having a basic understanding just a little bit of basic music theory can take your songs to the next step, especially learning how all of these parts fit together will give you a solid base to work with when it comes time to put your songs together. Obviously there is no perfect solution for how to structure a song but we will discuss a few different types, and basically describe how each one of them works. So let’s dive right in!

On a sheet of music, time signature is one of the first items you see on the staff. The numbers represent how many beats per bar for example, 4 and 4. Beats per measure is exactly the same thing because a bar and a measure are the same thing. On the staff you will see the time measure represented as two numbers, right after the clef symbol. Phrases are just like you would expect them to be in an actual language.

Every note is like a word and the phrase is basically what puts the words together to form a sentence. Yes you have to read the notes one by one, but a phrase puts all those notes together. For example, if I had a sentence that said “My dog likes to bark”, then I would see them as words my, dog, likes, to, bark. The way the human brain works, we look ahead and read it all together as one sentence, “My dog likes to bark”. That is how phrases work.

When learning how to structure a song, the intro always starts off the section and more often than not is mostly instrumentals without any words or at least not very many words. Sometimes when storytelling the intro is only words with no music in the background. Usually with the instrumental intro, there are only one or two instruments which then add more instruments as it builds up to the verse. Depending of music that you’re planning to produce, there are as many variations as there are instruments. Some songs offer a pre-intro which is typically 4 or 8 beats and leads directly into the intro. These are almost always instrumental.

The verse follows the intro and continues the same music as the intro, often with little less power and less instruments. Obviously you don’t want loud music over the verse because you won’t be able to hear what the artist is saying. Structuring a song requires that you have to leave room for the vocals. The verse is usually 16 bars and repeated three or four times throughout the song. It tells the beginning of the story. For example if I’m telling a story about a lost love, then the first verse would tell the part of the story that involves my life before I met this person. The second verse would usually tell about how great this feeling is and how happy you were. The third verse would talk about how it all came crashing down, and how heartbroken you are. The fourth verse would be all about how you’ve come out of this stronger and better than ever.

The Hook and the Pre-Hook

The hook itself is very short, usually 4 to 8 bars. This is usually the most memorable part of the song and usually has some sort of vocals. It also contains some sort of melody of instruments or background singing that is really catchy. When learning song structure, understand that the hook will usually be repeated three or four times during the song. The pre-hook (or pre-chorus) is usually just a small piece of time, 4 to 8 bars that is really just a build-up and lets you know that the hook or the chorus is about to begin.

In today’s popular music, structuring a song depends on the genre you intend to work in. You may have instruments only or vocals only. The chorus usually contains the title of the song and ties together the theme of the entire song. The chorus is typically 8 to 16 bars and is also repeated 3 to 4 times throughout the song.

The bridge usually occurs only once in a song and is used to break the monotony of the verses. It’s usually only 4 bars, but can be 8. Usually you would use a bridge after a verse or chorus that has a hook in front of it, but not always. The purpose of the bridge is to set up the next verse in a way that gives you a pause before the next hook or pre-hook begins.

The outro is the very end of the song. This part of the song is usually very short, 4 to 8 bars. This is where the lyrics stop, the story is over and now the instruments begin to fade. In some genres there is no outro and there’s only the chorus, which slowly fades out. 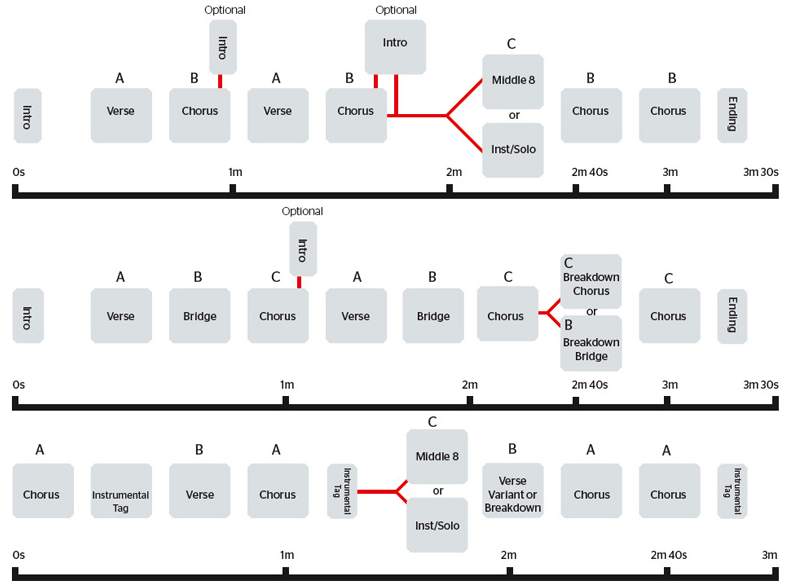 When structuring a song, there are many different ways to assemble one. Some of the most popular structures are as follows to give you a better idea of how they look when spelled out.

As you can see, there are several different ways of structuring a song. Find your own method, the one that works best for you and allows your creativity to flow. What I like to do is to try to not force a song’s structure but instead let it manifest organically. Learning song structure is really not that difficult, but it is very important and will help you become a better producer and songwriter.