Learning how to play the drums is doable. The drum set is a very unique instrument. It requires tremendous amounts of dexterity, precision and coordination while also requiring a great internal sense of pulse and tempo. You often hear people say that they don’t have one of those characteristics so they could never be a drummer but like any other musical instrument, all of these skills can be developed over time and anyone can eventually become a great drummer; even you!

Learning the drums is just like learning any other skill. You start with foundational skills and slowly build upon them while applying those skills in various settings. For a trained drummer, it is very easy to determine which skills an amateur drummer did not spend enough time focusing on while they were learning. It is important to learn the right way so that you do not have to go back and re-learn foundational skills. This post should help you wrap your mind around what it would take for you to become a drummer!

The Basics of Learning the Drums

There are two types of grip for drumming: ‘Traditional’ and ‘Matched’.

In both grips, the right hand holds the stick with the style shown for the “Matched Grip” picture. The Left hand is the only hand that changes from grip to grip. While the intricacies of the traditional grip are harder to explain and could take up an entire blog post, the Matched Grip could be explained like this: Set a drumstick down on a flat surface, and pick it up without thinking to hard about how you’re holding it. Chances are however you pick up the stick is pretty darn close to Matched Grip.

What are chops? “Chops” refers to the technical ability level of a drummer’s hands. 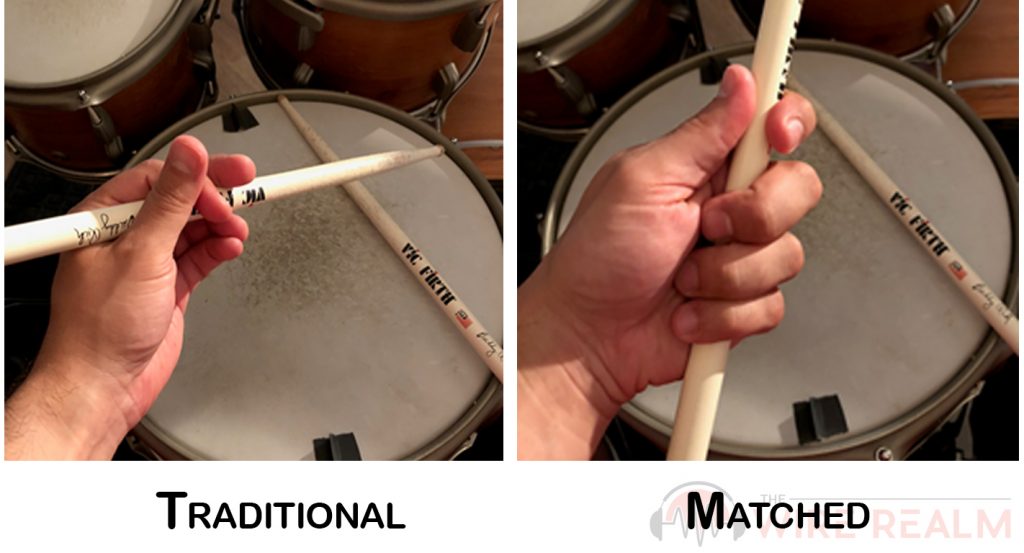 There are three or four types of drum strokes depending on who you ask. A stroke is simply a way to hit the drum with a stick.

A Piston Stroke is achieved when the drumstick starts from an upright position with ample space between the tip of the stick and the playing surface, strikes the surface of the drum and returns to the same position from which it started. A piston stroke can follow another piston stroke, or an up stroke.

A Down Stroke is achieved when a drumstick starts from an upright position, strikes the surface of the drum, and is controlled so that the end of the stroke is significantly lower than the starting point. A down stroke can follow an up stroke, or a piston stroke.

A Tap Stroke is like a piston stroke, however both the starting and ending points are very close to the surface of the drum. A tap stroke can follow a down stroke, or another tap stroke.

An Up Stroke is the opposite of a down stroke. The stroke starts with the stick very close to the playing surface, but after striking the surface the stick is lifted back to the height of a piston stroke.

Knowing these four types of strokes is imperative to drumming as drummers can only change their volume by changing the height of their sticks before each stroke. Various combinations of piston strokes, down strokes, taps, and up strokes allow for infinite variations of volumes. This video on stick strokes is great.

This, in my opinion, is the fun part of drumming. Every musical instrument has its scales and arpeggios. Scales are the notes from any specific musical key played in a predestined order and arpeggios are the notes from said scale that make up individual chords. Musicians practice their scales daily and use their scales in their reading, their composing and their improvising. Since a drum can’t create a measurable pitch, drummers have their own unique scales and arpeggios called “Rudiments.”

The 40 essential drum rudiments can be found at the website of the Percussive Arts Society (PAS) here.

Drum Rudiments are various combinations of single and double strokes that utilize rebound control  to create multiple strokes with a single hand motion. All drumming, whether it is on a marching snare drum or a jazz drum set, can be broken down into combinations of these 40 rudiments. As such, a proficient drummer should have all 40 of these rudiments mastered.

It is a common misconception that drum rudiments are only important for marching or concert percussion. They’re imperative to drum set playing as well. If you look at any interview with any of the world’s greatest drummers, you’ll hear the word “rudiments” thrown around several times throughout the interview. Rudiments are to be learned extremely slow and practiced in a “slow – fast – slow” pattern. This means you start by playing a rudiment over and over again starting very slowly and gradually speeding up until you can’t play the rudiment successfully anymore. Once you’ve reached your top speed you gradually slow down without stopping the rudiment pattern until you’ve reached the speed at which you started.

Vic Firth, one of the country’s largest drum stick companies, has a great education section on their website where every rudiment is explained and modeled. They even include play along tracks for your slow – fast – slow practice sessions.

Ready to Play the Drum Set

As you progress through learning to play the drums, you’ll find yourself coming back to the rudiments over and over again, so don’t abandon them once you feel you’re ready to sit down at the drum set. Even after decades of drumming, I find myself needing to take some time to work on rudiment number one, the single stroke roll. Translating these skills to the drum set is a slow process, but like anything else you have to learn to walk before you can learn to run.

*A quick note for left-handed drummers: I strongly recommend learning to play with a right-handed setup. Its simply easier to be able to sit in on any drum set without having to switch things around, and drummer should be able to lead any pattern with either hand anyways.

You’ll spend the majority of your first few months learning to play simple time beats. Whenever you’re playing any sort of beat, you’ll have to think about what is going on with your right foot on the kick pedal, your snare hand and your cymbal hand. There’s only a couple of variations of what can possibly be happening: either you’re playing with one of your hands alone, one of your hands in unison with the right foot on the pedal, or a combination of hands. Later on you’ll be adding your foot alone between combinations of hand strokes.

Let’s take a look at one of the first basic beats you’ll learn:

This is how drum sheet music is written. The x-shaped notes on top of the staff represent notes played on a cymbal, the bottom notes on the bottom space represent notes played by your right foot on the kick drum, and the notes on the third space (we count spaces up from the bottom) are played on the snare drum. The notes up top are eighth notes, which are played twice as fast as the beat on a metronome. It’s important to note that the notes played with the right hand on the cymbal should always be played evenly and you should always practice with a metronome!

Getting that right-handed pattern on the cymbal is the starting point of learning any drum beat. For this beat and most of your first beats its pretty easy, you play 8 notes over and over again at an even pace counting “One-and-Two-and-Three-and-Four-and.” The first note in each pair of notes is counted with a number and the second in each grouping is counted as “and.” Once you have that down, you add the notes played on the bass drum. It’s important to count out loud as you play so that you can start to associate each stroke with its beat. You’ll add a stroke on the kick drum on “One, “Three,” and the “and” of three. You can also think of it between your hand on the cymbal and your foot on the pedal like this: “together, hand, hand, hand, together, together, hand, hand.”

Don’t hurry to add your other hand. Repeat this pattern with hand and foot repeatedly until it feels comfortable at various speeds (are you still practicing with your metronome?). Once you feel you’re ready to add the other hand, you’ll notice that it plays on only beats “Two” and “Four.” This is pretty common for most of your basic drum beats. We call playing on beats “Two” and “Four” on the snare drum the “backbeat.” Having a strong and steady backbeat is one of the most important traits of a good drummer. You can think of this basic pattern like this: “Together, hand, hands, hand, together, together, hands, hand.” Together represent hand and foot, hands represent both hands played simultaneously, and hand representing your cymbal hand.

Some people think that drummers put different parts of their bodies on autopilot and focus on other parts of their bodies in order to play beats and rhythms that seem incredibly complex. This is not the case for most drummers. This process of breaking down what goes on what beat, what limbs play simultaneously and what limbs play alone in what order is pretty much the process for learning any and all beats as long as you’re drumming. As you learn more and more beats, the process simply becomes quicker due to the fact that different beats contain the same portions of other beats played in different orders.

Spicing Up Your Learning to Play the Drums

Now you’re probably going to want to add drum fills soon. Start simple with different rudiments played drum to drum. You’ll want to make sure that you’re always sandwiching your drum fills with drum beats. Some drummers make the mistake of practicing their drum fills independent of their drum beats. I encourage my students to play four measures (the basic drum beat we just learned is one measure long, play that four times) of time, followed by whatever fill they’re working on, and transition directly into four more measures of time. Make sure you’re still using a metronome! The most important thing a drummer does is establishes time. Good drummers are not measured by their ability to play complicated fills, rather they are measured by their ability to keep solid and consistent time in a style that is always appropriate. This means time that is always in sync with the metronome!

This protocol is the one by which you will learn each beat and conquer new styles as you progress as a drummer. In closing, here are some reminders: