Looking to find the best voice recording app since the stock program your smart device comes with just doesn’t cut it? We were in the same boat until we wrote this guide. There have been quite a few instances which we’ve gone to record some voice memos, band practices, speeches as well as lectures and have started to fumble and really question how effective the “standard voice memo” app is. There have even been times when we’ve thought we were recording for nearly an hour to only find out it had stopped half way through! We had enough and felt the need to research what else was out there. Whether you’re on iOS or Android, we found the 10 best apps for voice recording, both paid and free. Let’s get into the details. 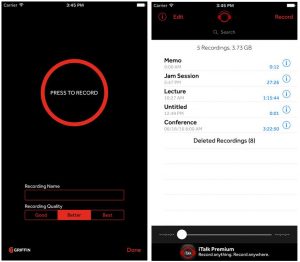 When there’s a will there is a way, and the iTalk Recorder proves that Apple products continue to make life as accessible as possible. Offered as a full-featured recording app that contains a streamlined and easy to understand user interface with obvious features that will alleviate any possibility of confusion. Literally press the big red button to commence and pause your recordings as you progress if needed. You can also record and send via email what you have saved through the applications iTalk feature. Something also neat about this one is that you can now choose from three levels of recordings, 11.025, 22.05, or 44.10 kHz sample rates enabling the user to manage their recordings at the press of a button (not sure why you’d go for anything lower, but be our guest). This is one of the best recording apps for those of you who are in need of something quick, easy, and incredibly useful. Toss away that old school recorder and make your life that much easier with the iTalk Recorder, although right now it’s only available for iOS. 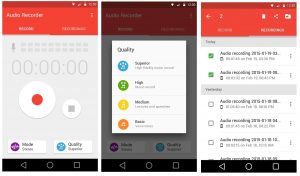 To combat our previous iOS only pick, here’s a nice Android solution with superb recording capabilities. This is the official Sony Audio Recorder application that is easy to record and playback any audio that you have on your Droid smart phone or tablet. Recording your sounds just got that much easier, as this recording interface offers an even easier access to stop what you’re doing and record, pause, and replay anything that you come across. With social media changing the world of film and photography, the recording app is right on board by allowing the user to have instant access to sharing their recordings whenever you see fit. Equipped to be accessible to nearly all microphones, the Smartwatch or Smart Band, this is a smart phone savvy recording application that will bring your experience to life. It was also number one in Android Authority’s recording app guide.

For musicians who are looking for a quick and easy way to re-listen to their recordings, or even look for new and improved sounds, the Recorder Plus Pro is a simple way to playback the sounds of your choosing. Equipped with one touch recording as well as pause and resume features, this is certainly one of the best apps for recording to date if you’re in need of capturing some speeches, lectures and more. This is the first step to making your recordings sound professional as the applications audio has new and improved high quality features. Whether you are interested in recording music, an interview, or natures sounds, this is an application that enables your iPhone to convert into a real-time audio recorder. Fast, simple, and innovative by design, this is one of the best recording apps that comes with a compressed audio format and one that will allow you to record your customized high-quality sound for hours at a time. 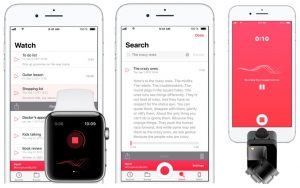 The name explains it all as this intuitive audio recording application is about as simple as it gets. With Just Press Record, you can now share your recordings through your phone to other apps on your audio iOS (yes, Apple only right now) device, in addition to having an unlimited recording time. Simply press record and unleash an unparalleled mobile audio recorder that can potentially sync to all your devices. An awesome feature that ‘JPR’ also contains is the user’s ability to choose to record from the apps built-in microphone or connect their very own. In life, there are certain moments that should not go without documenting, and this recording app makes it that much easier not to miss them. Whether you want to record the sounds of a speech, a phone call, or your friends band performance, this is a new and improved application that allows for high quality recordings that can be done independently. Connectable with Apple Watch also makes this a unique app and allows unlimited recording options, and makes this one of the best voice recording apps around in our opinion. 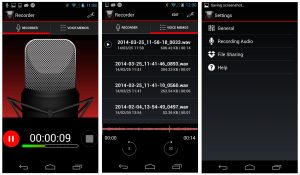 Raved about as one of the most high-quality voice recording applications in the market, this is a perfect option for those of you who would like to retain the best notes possible. Often described as the optimal choice for business meetings as well as for class lectures, this is a recording application that is of professional quality. Aspiring journalist? College student seeking the best notes? This is an application that offers versatility by allowing the user to choose between laptop, tablet, or their phone. Endless features, such as an incredible voice recorder interface, Bluetooth recording, and iCloud syncing, this is an app that is no secret and is highly regarded as one of the best recording apps out there. If you are going to leave here with one thing in mind, let it be known that this is a highly tested, unlimited recording application that is perfect for sharing your information with the world. It’s great for on-the-fly recordings if you’re like us who have song ideas pop into their heads at the most random times and need to jot them down. 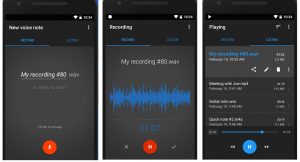 This is an ideal option for the everyday user that isn’t necessarily looking for the most advanced features but more so just looking for a simplistic, accessible recording app that can capture your recordings in the quickest way possible. As Easy Voice Recorder implies, the name says it all as this app is the perfect note taker that can be used for various important moments simply by pressing one button for both play, pause, and resume. Great for taking notes, this voice recorder is limitless and one of the best recording apps for students in universities. Lectures are now able to be captured with impeccable quality, and can be captured without limits on time. So if you have a long lecture to worry about, this recording application offers a compressed format that is easy to use and perfect for recording longer than usual classes or meetings without taking a whopping amount of space on your device. Prepare yourself the best way possible, and let the easy voice recorder take over for you and remember the necessary aspects of your next important setting. 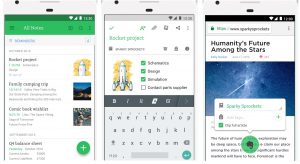 Share your thoughts, documents and PDF’s with colleagues, friends or family by letting Evernote allow the user to optimize efficiency and cut out time. This is definitely not just a “simple recording app”. Offering shortcuts, widgets, and various tips, this program makes staying organized so much easier for those of you who are often traveling. It’s often considered a great choice for those who like to minimize their workload and maximize efficient work time. Access your note’s offline, forward work emails with up to 10 GB of new uploads every month. Evernote provides the ability to record a meeting in business settings and also contains the ability to sync Evernote to all of your devices, making this one of the best recording apps in the workplace if you needed more than just a recording feature. Ever have a pile of work that needs to get done? This app lets you organize your tasks more efficiently and spend less time looking for prior work and more time staying productive. From PDF’s to saved emails and business cards, Evernote is more than just a recording app — it truly does mostly everything. 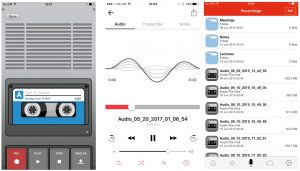 A 3D touch accessible voice recorder that offers jam-packed features to generate a real life sounding memory. Although only available for iOS, this is one of our favorite picks as the best voice recording apps in the market today. Start and stop your recordings as you please, and record your sounds for as long as your storage contains availability. In addition to your standard audio recording, with this program you can also incorporate notes to each individual recording. One of the best and most utilized features that makes this one of the best apps for recording is the applications cloud support which enables the user to upload recordings to iCloud, Dropbox, or OneDrive. Sharing your audio recordings to social media is also simplified with this app, as you are able to share each file via email, instant messenger, Facebook, Twitter, or Snapchat, making this a fun choice for the younger demographics. This application is offered with so much versatility, as well as up to speed technology that will allow you to not only better transcribe your recordings via text, but also transfer them by USB cable or Wi-Fi. 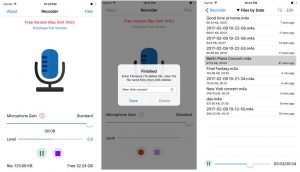 When it comes to highly advanced audio recording apps, Hi-Q is far and away one of the further along voice recorders around, and one that will make your sound emulate how its heard in person. Filled with tons of features and personalized options such as voice notes, brand practice, discussion boards and lectures, this is a versatile recording app that can be used in virtually every setting. All you need to do is press the conspicuous red button to play, pause and continue, enabling it to offer a simple approach to a reliable recording. This is one of the best recording application for students as you can now articulate your lecture with precision and high-fidelity 44 kHz audio sampling. You can share, sort, rename, edit and delete any recording as you go, alleviating the possibility of your sound coming out any other way than how you desire. Hi-Q is low-key one of the best recording apps out there as it is substantially further ahead of any standard recording app. 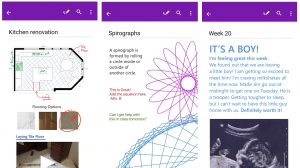 For those with great ideas but nowhere to jot them down, One Note has changed the game in the way that we take note of our thoughts. With this premium program, you can now capture your notes by either recording, hand writing or typing, as One Note now allows you an easy virtual method for staying organized. As a strong competitor against Evernote, this one is recommend if you needed more versatility. Tired of writing on a note pad and later consolidating to your computer notes? This is one of the best recording apps for the work place and is constantly help grow businesses in today’s day in age. Sync your thoughts worldwide, whether it’s organizing a social reunion, or working remotely from home, One Note now lets you constantly remain up to date with every member thoughts, questions or concerns. Equipped with new and improved tools including features that allow you to jot down hand written notes, and converting them to typed texts. Regardless of the occasion, One Note has got you covered — it’s made by Microsoft, so we have confidence in this things power.