Let us know in the comments if you think we missed a viable piano VST, or if any of these you’ve had luck with in the past. Quick reminder that we have a few other guides for sounds to check out after you read this one, such as our guitar VST, bass VST, or even synthesizer VST best-ofs.

Most of these cost money but if you need some free piano VST check out that guide instead. 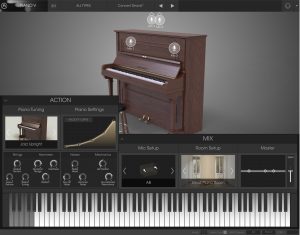 Arturia’s piano V boasts of meticulously modeled sounds making it one of the best piano VST in our opinion. True to this, Arturia combined four decades worth of data to come up with the right blend of tones for musical intimacy and artistic expressions. It utilizes acute and subtle variations such that the hammers positioning, composition and microphone placement can all be altered simultaneously. Using new presets leads to instant parameter changes. All of these while added to the resizable 4K graphical user interface accords Piano V users high flexibility and some genuine sounds that won’t be all digitally. 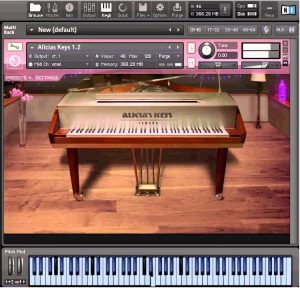 This is one of our favorite of NI’s piano virtual instruments and the company’s highest profile endorsement thus far. The VST was, as guessed, greatly inspired by Alicia Key’s magical piano and voice. Therefore, it was only right that Ann Mincieli, Alicia’s engineer, was heavily involved in its creation. The piano VST is based on the Yamaha C3 Neo, a favorite of Alicia. From convolution revers, sympathetic resonance, release or attack behavior, to algorithmic reverb, there is no end to the wide range of features offered by this highly reviewed VST.

The sostenuto and sustain pedals are fully catered for in addition to the fader control. Its microphone hiss, keys and mechanical noise can conveniently be controlled using the fader control. What’s more, it takes up a meager 7 GB which is nothing compared to most modern VSTs. Apart from the lack of choice in regards to actual piano sounds, you can still customize and tweak what it comes with rather well — Native Instrument’s Alicia’s Keys qualifies as one of the best piano VST options in our book, considering we’ve been using it for years as well. 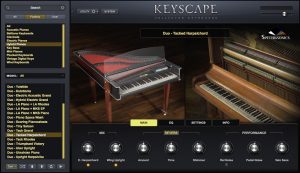 The Keyscape by Spectrasonics comprises of at least 36 keyboard models; from modern retro-styled boards to some hits of the 70’s. It also includes an exciting collection of unsampled rarities of the hitherto kind integrated with the grand concert piano. The Keyscape easily qualifies as one of the best piano VSTs on merit of its ease of use and convenience. Unlike most contemporary models, the Keyscape has been designed in a way that compresses its lossless audio to allow for easy installation. Here, the 200 GB installing space is reduced to a more manageable 77GB. Those looking to reduce this size even further can use the Lite Menu which is only 30GB. However, the format is limited to use by the STEAM sound engine by Spectrasonics.

Either way, the plug-in versions are usable on both Mac and Windows OS with a 64-bit platform. Also noteworthy is that its Omnispehere effects allow for layering of patches from two distinct layers. We’re absolutely huge fans of Spectrasonics products as we’ve used many with great success, and this piano VST is no different. It’s definitely costly when compared to others, however. 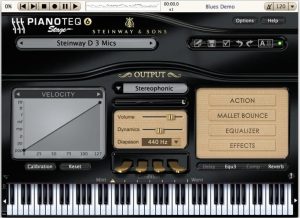 What makes this one of the best piano virtual instrument models? Pianoteq is usable on Windows 7, Linux ARM, and Mac OS x 10.7 or any lntel versions. It supports NI’s NKS format and can be used an AU, VST3, AAX, VST2 plug-in or in standalone mode. Once authorization and installation is complete, one has to pick an audio output interface and a calibrated MIDI in order to commence sound production. Using the GUI, one can easily navigate through the vast variety of customizable tone and sound shaping parameters available.

More importantly, Pianoteq features a mix of Steinway D and B grands, thus, allowing for all kinds of pianistic sounds. We’ve linked the broader page because at our fingertips we have everything from Steinberg pianos to vibraphones, celeste, xylophones and more. It’s gotten a lot of great reviews and has developed a huge reputation among the music making world, in particular being mentioned many times on Reddit which lead us to check them out. 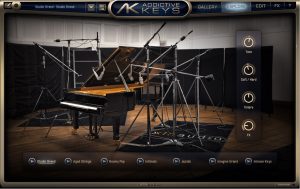 A preset browser, preset editing, effects, envelopes, and cloud storage are some of the standout features that make the XLN Additive Keys one of the best piano VST in the market. It features various keys including studio grand, market one, electric grand, and modern upright. Basically, these are accurate reproductions of real-life keyboards that have been created virtually by taking samples along the signal path where modifying and modulating is done. Its minimum requirements include steady internet connection, AMD or Intel PC with Windows XP or later, MAC OS X 10.5 or later, and 64 or 32 bit. Each key has a unique blend of 6 different microphone placement settings. With these, cloud storage, and a plethora of sound effects as well as envelopes, the XL Additive Keys qualifies as one of the best picks for amateur and seasoned music lovers. 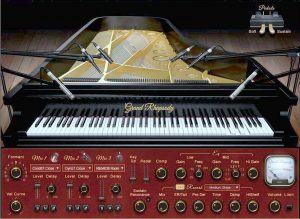 As has been the case with other plug-ins by Grand Rhapsody, this particular version uniquely captures the sound of the renowned Fazioli F228 which has been used in the creation of several hit songs such as “Hello” by Adele. It’s library is only 14 GB in size, but if thoroughly compressed, can fit in 6 GB. Also, instead of digging around for the exact CC number to complement your DAW, Waves includes a Sustain Pedal knob which one simply needs to raise for regular assignments.

Multiple mics were used in its creation, ranging from the RN17 to the SM58. Users can easily stack up as many as 3 mic simultaneously to achieve a variety of sound combinations. Ideally, its stack-ability, sustain pedal knob, and accurate emulation of one of the most famous London pianos make the Waves Grand Rhapsody one of the best piano virtual instruments.

Here’s a complete free piano VST to switch it up. Spitfire Audio LABS’s key features include an easy to use interface, dedicated plug-in, and AU/AAX/VTS2/VTS3 compatibility. However, this VST qualifies as one of the best piano virtual instruments largely due to its ubiquitously soft tone. Its timbre is very personal allowing users to feel all ringing elements of the sustain pedal once it is deployed. This is accompanied by frame creaking to make it even more realistic. With 14 distinct string players, one can choose to use either sustained or short articulations. Using its sparsely designed interface, users can control both vibrato and dynamic timbre. Essentially, this VST has been designed to enhance one’s creativity. 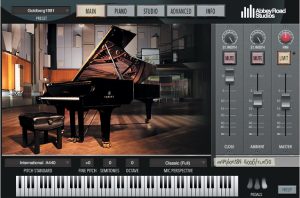 The Garritan Abbey Road Studios CFX is a sampled variation of the iconic Yamaha CFX Concert Grand piano. When devising this VST, Garritan aimed at thoughtfully emulating Yamaha CFX’s elegant sound; and the outcome was impressive. The VST operates in standalone mode as a component of the ARIA player or in the form of a plug-in. It runs on at least 4 GB RAM in a variety of formats including RTAS, AAX, and AU. The master controls are located in the main tab, which include width dials that allow users to create ambient and close mics. You can also switch mic setups in-between a performance using the mic perspective menu. 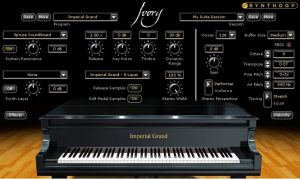 The Synthology Ivory Grand Piano lives up to the hype, but let us warn you that this is a beastly piano virtual instrument. It’s 81GB worth of samples, impressive pianos, and low latency performance make it one of the best piano VSTs available in the current market. It features a total of 3 acoustic pianos, namely the Yamaha C7, the Bosendorfer 290, and the Steinway Model D. Although dependent on the piano, one has access to a total of 18 pedal sounds, velocity layers, and string resonance, all of which include half-pedaling support. It is usable in RTAS, AU, and VST format or in standalone mode. More importantly, it is compatible with both 32 and 64 bit platforms and has been programmed with DSP for real-life resonance responses. Just a huge staple-point in the sounds world. 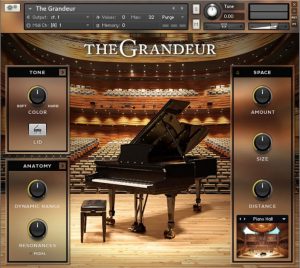 NI has sampled 3 pianos in the latest version of its Definitive Piano Collection: The Maverick, Grandeur, and Gentleman. A brainchild of NI and Galaxy Instruments, this VST features overtone samples, resonance, samples, eighteen velocity zones, and a Kontakt player interface. However, its 2500 samples are both a pro and a con. On one hand, this offers limitless sound creation possibilities but on the other hand, it creates a RAM heavy software that includes up to 14 GB of uncompressed data (as with many NI VST). With a combination of Maverick’s booming production, Gentleman’s meditative sounds, and Grandeur’s reverberant overtones, it is easy to see why NI’s Definitive Piano Collection is ranked among the best piano VST and tops off our guide with a bang.

Pianos are arguably the most elegant sounding instruments of all time. However, with this amazing sound comes a sizable price tag. This makes buying a piano a rather challenging investment especially for up and coming musicians. Fortunately, technology has made it possible for music aficionados to play the piano without the need to physically purchase one. Thanks to piano VST technology, artistes can today operate pianos from their mobile devices. A piano VST is basically a piano-emulating software.

All one needs is a keyboard MIDI controller, preferably one with all 88 keys but really one can make some tunes without even external pieces of gear by writing in the notes in your DAW. This kind of software generates sound digitally and operates as a standalone plugin. In some cases, a DAW can be used to host the VST. Evidently, this is a worthwhile addition to your music gadget collection. It is an economically sound investment that offers convenience and efficiency to all pianists. We don’t know where our music would be without at least a few piano virtual instruments in our toolbox.