Buying the best guitar amplifier is a must, especially if you take your shredding seriously. Whether you’re looking to jam out alone in your room, play some chords at a party or amplify your strumming for band practice, it is essential you have a guitar amplifier in the mix. I mean, it literally won’t work to its fullest potential otherwise! To our avail, there are some super affordable amplifiers out there that are effective yet easy on your wallet. We see the list dominated by some popular brands, such as the famous Fender and Marshall, however there a few others you may want to take a look at depending on a few factors we’ll highlight first. Here are the top 10 best guitar amps in the market today.

How to choose your guitar amplifier

The following is our list of the 10 best combo guitar amps available today. Don’t forget to check out our best guitar pedal or guitar tuner guides if you need some additional gear for your rig. Let us know which model you prefer in the comments! 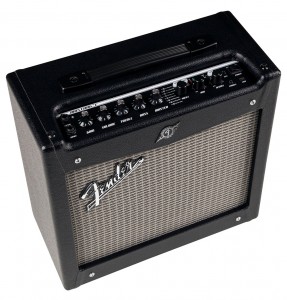 Check prices\reviews of the I V2: US | UK

The Fender Mustang I V2 is one of the most popular guitar amps on websites like Amazon and Sweetwater, which is always a huge plus for me when I’m looking to buy a piece of gear. Fender is probably a brand you’ve already heard of and we all know why — years and years of a reputation for providing quality equipment. It’s a combo amp providing 20 watts of power with a 1 x 8″ speaker, 37 built-in effects and 24 onboard presets for extra custom playing. You can hook it up via USB, get a control panel for most aspects you’d like to tweak (gain, volume, treble, bass, preset, mod, delay or reverb, tap tempo, and master), and it also has a headphone output if you want some private playing.

Another plus is the inclusion of Ableton Live 8 (Fender Edition) if you’re looking to record some of your jams and you don’t have a DAW yet. This is definitely our pick as the best guitar amplifier out there at the moment. You can also check out their Fender Mustang II V2 for extra bucks, with that speaker being a bit bigger and providing some more power with 20 more watts if it’s within your budget. 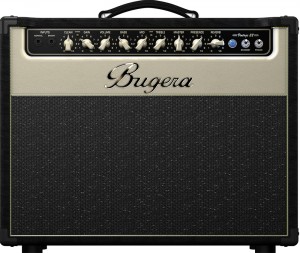 Check prices\reviews of the V22: US | UK

Here’s another one of our favorite picks as the best guitar amp, and this one is super popular combo amp with a lot of positive reviews. The Bugera V22 is super powerful, and although the 22 watt and 1 x 12″ design may not seem like a lot, it’s got two channels with three preamp tubes. It’s also got an “old-school feel” to it as you can see from the image, but the sound is also very warm if you’re into that. You can also choose between “Triode” or “Pentode” operation which in layman’s terms either gives you a gentler or overdrive tone depending on your mood.

Match it with a cabinet for even more power, but standalone it gives you more than enough volume if you’re not playing in a venue. A few other highlights include a footswitch reverb as well as normal and bright inputs. This thing is awesome and gives you a nice retro feel while still providing modern-day clean audio. 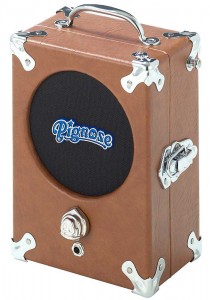 Check reviews\prices of the Pignose: US | UK

I remember when my dad had a small Pignose amp and would let me jam out (or at least I thought I was) when I was very young. For some reason that gives me some bias due to the nostalgia, but if anyone else is aware of them their gear is up there in terms of quality. They call it “legendary” for a reason. The Pignose 7-100 is great for those looking for a simple solution and is one of our favorite ‘mini guitar amps’. The specs include 5 watts of power, has a very rugged built (metal cornered), gives you a preamp jack to pair it up with other solutions, and can be powered via batteries to give you an ultimate travel and portable guitar amp.

It’s only around 6 lbs so if you’re on-the-go, this is one of the best simple, cost-effective units in the market. Grab it if you want a model that’s been around for decades and has proven itself through father time that it gives you what you want: a piece of gear to power up your guitar while you’re on the move. It very well could be the best guitar amplifier for you if you’re seeking for a solution with a small and versatile build yet quite powerful capabilities for its size. 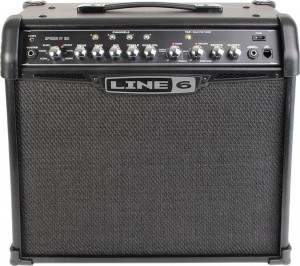 Check pricing\reviews of the Spider IV: US | UK

A bit of a step up from the Frontman 10G, we get a smaller model as the best guitar amplifier again with the Line 6 Spider IV but with 15 watts this time. Paired up with an 8″ speaker, you get a tight response with a 3/4 closed-back design. You can do custom settings with this one, tweaking the EQ, gain, effects but what’s nifty is the fact that you can save up to 4 combinations for future use. In terms of FX, they’re actually quite impressive (more than the Fender): chorus\flange, phaser, tremolo, tape and sweep, and reverb.

You get control on the front to mess with each level of frequency and there’s a built-in tuner (why not?). This is a super solid amp for the price and gives others a run for their money, with the only downside being the 15 watts is a bit less than others in this calibre so pick your poison. Check reviews\prices of the 10G: US | UK

Another Fender amp coming in hot! The Fender Frontman 10G one gives us a bit more power than the Pignose, coming in at 10 watts and one 6″ speaker. Super portable due to the small size, great build (silver grille, steel knobs), dual channels (normal and overdrive), as well as an aux input and headphone jack in case your neighbors aren’t the friendliest. It’s very loud for the size and weighs a little more than the Pignose at around 9 lbs. Recommended for those who want a smaller amp that still has some power.

It’s typically seen under a hundred on most sites. We had to put it in here because of how popular it is. It’s one of the two mini amps we recommend, so if you want to steer away from the Pignose and stick with Fender, this here is a great pick as the best guitar amplifier if it suits your needs. 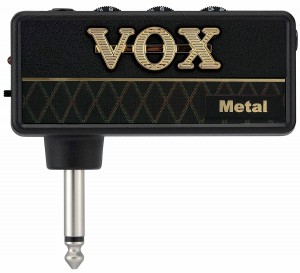 Check pricing\reviews of the amPlug: US | UK

Here’s a different spin on the term best guitar amplifier, however it may be exactly what you’re looking for. It’s for those who plan on playing ‘quietly’ and only need an amp for headphone use. The Vox amPlug is merely a converter from guitar-to-headphones but gives you a bit of a boost in the middle. It fits in the palm of your hand and connects via AUX input to any CD or MP3 player so you can play along with it.

This is super effective for those wanting to practice or just get that jamming in during late night sessions after work. There are quite a few models out there so you’ll have to pick between them — acoustic, bass, lead, twin, etc. 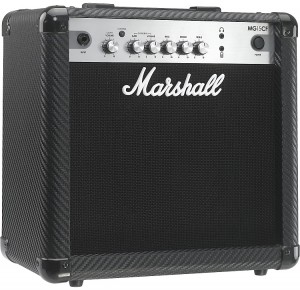 Check pricing\reviews of the MG15CF: US | UK

The Marshall MG15CF is another one of the best guitar amplifiers with 15 watts and an 8″ cab but it’s got 2 channels with an MP3 input so if you’re looking for that, this will be the deciding factor between this or the Spider. You’re also getting 3-band EQ control, a line-in for music players and headphone out in case you need a private jam session. Weighs about 16 lbs so it’s a bit hefty but that just means it’s more tank-like in terms of build.

Not that many impressive FX like the Spider, however. A lot of positive reviews in terms of power so you’ll be satisfied there. Marshall is always a trustworthy brand when it comes to quality amps so be confidence when you see that logo. 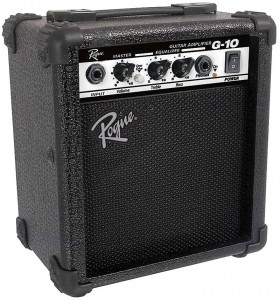 Check pricing\reviews of the G10: US | UK

If you were looking for one of the best budget-friendly guitar combo amps, the Rogue G10 is it. Coming in street price under fifty bucks, you get a 1×5″ cab with 12 watts of power. In terms of price-to-quality ratio, it’s very worth it if it fits your needs. You get the convenient controls on the front, with input plug, volume knob, overdrive switch, and bass\treble control.

You’ve also got a 1/4″ headphone out on the back for some private playing, and the compact size of 10 x 9 x 6 will allow you to travel flawlessly. One of our other favorite “mini amp” models, grab this if you’re looking to spend just a little bit of cash on a (not overpowering, however) decently spec’d guitar amp. 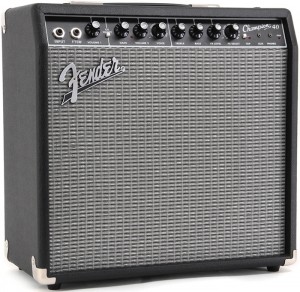 Check pricing\reviews of the Champion 40: US | UK

The Fender Champion 40 is pretty beastly, give us two channels and selectable voicing. The guitar amp is one of the biggest in terms of size we have in this article, coming in at 12″ with a decent 40 watts of power. It’s 19 lbs so not as luggy as the others, so it is very well still portable if you travel a lot. The Fender vinyl covering with a grille clothe gives it a superb build.

The effects you get include reverb, delay\echo, tremolo, vibratone, and chorus. Another plus is the footswitch input. An all-around super solid amp, and although a bit more expensive than the others in here you are getting what you pay for — two channels, effects, a solid build and a good amount of power. 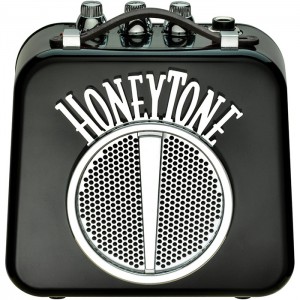 As the last but certainly not least choice for the best guitar amplifier, let’s finish off strong. This is only around twenty bucks, and thought we’d put it in last to give you the option if you want a super cheap model. The Honeytone N-10 is one of the coolest looking amps we could find in terms of color choices and aesthetics. You get overdrive tones, a leather handle for portability, belt clip and headphone jack.

I’m not the biggest fan because I’d rather spend a few extra bucks for the Rogue or Fender mini models but again, this is here for the option. Mostly because it is super cheap and looks rad. It’s better for practice sessions or smaller uses since it doesn’t provide that much power, but still enough if you’re going solo or with a friend just jamming out in a room. Here’s a cool video of the N-10 in action.