Finding the best EQ plugins for your mixing adventures in making music can be a bit daunting, considering not only how many options there are out there nowadays but also how advanced the entire process of equalization may appear (especially to us just starting out in home studios). Nowadays, even the stock EQ plugins in your DAW can be feasible — many of us just need to simply tweak some lows and highs here and there to perfect our mix and not get too crazy with it. Others however may be seeking a more advanced equalizer FX VST that can take your music to the next level. Regardless, we’ve found some of the best EQ plugins in the market today. But first, let’s get into some EQ details if you need to brush up on your knowledge.

What is EQ in music recording and mixing?

Chances are that most sound engineers spend the majority of their mixing time tweaking equalizer plugins. This is because the equalizer, commonly abbreviated as EQ, is arguably the most powerful tool in any sound mixer’s arsenal and is pretty critical to get to understand even if you are just bedroom producers like we are. Just as the name suggests, this type of FX plugin allows users to create an equalization effect which is the process of balancing the various frequency components that make up a sound signal in your music.

The human ear has the ability to detect an extensively vast frequency range i.e. 20 Hz – 20 kHz. As such, it is of utmost importance that one evenly balances these frequency components in order to produce ideal reverberations, as well as cut out certain sounds your ear detects to make sure your music is as clean as possible — and this is where an equalizer VST comes into the picture!

How to Use an Equalizer

In essence, an equalizer is used in the manipulation of frequency content with an aim of enhancing sound clarity and achieving optimal frequency balance. It works by adjusting the volume of its differential parameters in a manner that is relative to the other frequencies. However, the output is determined by how well one plays around with the available tweaks given that using an equalizer incorrectly can have detrimental effects to your mixes.

To ensure that you are going about it in the correct manner, start by getting rid of all unwanted frequencies. A frequency sweep is an important part of the entire process as it helps remove resonating frequencies within the instruments or vocals. Ideally, it helps create a clean and crisp sound. What’s more, cleaning up should be done for both the High End and Low End. Failure to do this will result in blunt reverberations at your low end and a hissing sound at your high end. Users are required to cut out unnecessary frequencies including high-frequency noises which are quite common in pads, FX, and huge synths. As for the low end, unwanted low frequencies should also be removed in a bid to ensure your bass and sub bass remain optimally defined.

How Not to Use an Equalizer

Anyone can learn how to use an equalizer. However, most users tend to make certain mistakes repeatedly. Learning how to avoid these mistakes is as important as learning how to effectively play around with your EQ virtual instrument. To this end, one of the most common mistakes is not knowing when to stop. Understandably, EQ’ing is an enthralling process that most people, especially perfectionists, tend to get lost in.

Nonetheless, it is important to remember that excessive use of EQ adjustments has a marring effect on sound quality. It is therefore crucial to learn when to stop making alterations or risk making the sound duller or even unnatural. Secondly, using presets is sometimes a mistake and shouldn’t always be your go-to. You obviously need to create a unique sound; one that is custom-made to suit a specific purpose. However, presets are designed for more general sound production purposes. Therefore, steer clear of presets if you are looking to create custom-made reverberations.

Thirdly, EQs are not magical tools — they cannot help you fix a poor recording. Before jumping to the EQ board, always ensure that the recording in question is of proper quality. Otherwise, you do not stand a chance! Lastly, a good number of audiophiles use substandard EQs hoping to create high quality sound mixes. You need to pick a relatively stable equalizer in order to create good quality music.

With that in mind, here are the best EQ effects VSTs in the current market below! 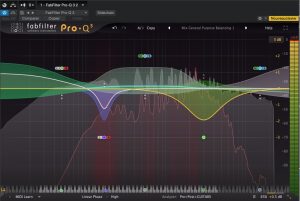 Sonically, the FabFilter Pro-Q compares only to highly rated EQs while its GUI is well reviewed largely due to its ease of use. This equalizing VST provides users with a wide range of features and pretty good sound quality. Among the goodies on offer include interactive MIDI learn, an A/B switch, help hints, redo/undo buttons, and an SPI (Smart Parameter Interpolation). On the other hand, its user-interface includes a massive interactive EQ display from which users can design bands, edit bands simultaneously, and enable dynamic EQ for all of them. It is by far one of the best EQ FX plug-ins of today and a favorite of ours that we use frequently.

Waves is one of the top-rated manufacturers of virtual instruments and other music accessories. Among its leading products is the Pultec EQP-1A which is renowned for its unique ability to create resonant shelves. In essence, this is one of the few plug-ins that can cut, as well as boost, multiple frequencies simultaneously. It is a replica of the original model, a brainchild of renowned sound engineer, Puig Jack Joseph. It is legendary pieces used in several hit singles by artistes such as Lady Gaga, U2, and the rolling Stones. With such a reputation, it is easy to see why the Pultec EQP-1A is among the best equalizer software plugins as of today.

Having the SSL Native Channel Strip plug-in is like having an SSL Console-installed DAW, which used to be only available to professional studios with thousands of dollars in investments. This EQ plugin comes fully equipped with the 4-band parametric system that is common to SSL gear. These include the compressor, gate, expander, filter, and EQ configurations. Combined, these features make for a pretty good one-shaping tool and one of the best equalizer FX VST models. What’s more, it features two of SSL’s prime EQ sections, that is, the G-Series and E-Series. This combination helps users apply a reasonable amount of equalization without necessarily distorting the sound signal in low end frequencies.

The original API 550 model was referred to as a beast due to its solid functionality. Similarly, the API 550A EQ VST is today ranked among the best equalizer effects plug-ins. To a great extent, this reputation is based on the instrument’s unique ability to produce repeatable and reciprocal equalization. This is normally done at 5 steps boost and 15 points. However, for optimal sound production, they need to be divided into three distinct ranges that will overlap each other. Additionally, one can also insert the band-pass filter independently and select the low or high frequency ranges individually. We love the Waves 550a and 550b because they pack powerful punches in a small package. 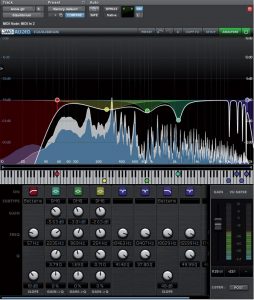 The design for the DMG Equilibrium was drawn from 50 years of equalization history. This custom-made EQ VST is structured to offer users an adaptable user design and a wide-ranging list of features, thus, enabling audiophiles to master tracks and tackle even the most critical mixes. Its flexibility however is what makes this tool stand out from the rest — in other words, it is ranked among the best equalizer FX plugins mainly since its multiple parameters offers users extensive flexibility as it is suitable for use with several applications. Other notable features include routing and grouping control, relatively low CPU usage, 32 bands, and a reconfigurable user interface.

Among its primary attributes is the ability to generate hardware sounding reverberations. In addition to solid sound quality, the PSP E27 is also renowned for its ease of use and musicality. It features 3-band equalization and a total of 9 frequencies that can all be selected individually at a standard package of 500x. With smooth saturation, the E27 VST offers a cut or boost of up to -/+16dB. What’s more, its high as well as low filters are usable in shelf and bell mode. By and large, the PSP E27 qualifies as one of the best equalizer VST models of today.

You might be wondering what makes the UAD Neve 1073 one of the best EQ effects virtual instruments as we near the half-way mark of our guide. The answer lies in what this pretty good tool can do for you. One, you can do real time recording by means of Quad, DUO, or Apollo Twin interfaces that are part of the 1073 preamp feature set. Secondly, it provides you access to artists presets ranging from Jacquie King to David, Isaac, Ed Cherney, and Ryan West. Also, you can mix in 10 unique clipping points that were present in the original 1970’s edition, thus, allowing you to color your mix in iconic fashion.

Slate Digital’s VMR 2.0 bundle is one of the best equalizer VST options in the contemporary music age. Not only does it feature a combination of 2 distinct analog-modeled equalizer modules but it also features FET and VCA modeled compressors that can fatten all kinds of tracks. What’s more, it includes a ‘Virtual Mix Rack’ which enables users to grow their selection of plugins. Some of the included plugins are the FG-401 compressor, TRIMMER, FG-N equalizer, Revival, and The Monster.

The Manley Massive Passive is described in most reviews as a high-end tube equalizer that is best suited for mastering as well as mixing. It holds a wide range of abilities that go a long way in making this a serious contender for the best EQ effects VST. With the Massive Passive, users can select between mastering and basic versions while incorporating bandwidth parameters that have been stepped. Additionally, it is possible to shape masters and sounds. You’re also able to fine tune the texture of your music using the intricate blend of bands in collaboration with amp distortion control. Most notably, harshness is maintained at a minimum even after dialing in clarity, sizzle, punch, or air. This 3-band equalizer is designed to emulate the classic 1073 EQ console that was commonly used in the 1960’s and early 70’s. Being one of the best equalizer FX VST models, its reputation exceeds itself as it has been used by a number of chart-topping artists from various genres including Jay-Z, Black Sabbath, Adele, Lana Del Ray, and the Hot Chili Peppers. It features an nifty mid-range band of 10kHz as well as a high-pass filter and a complex inter-correlation between low, mid, and high bands. Altogether, these features allow the Scheps 1073 to create harmonic distortions and good sounding saturation.