Our music really took a turn for the better once we sat down and took the time to learn delay effects, and we didn’t even have to get too ‘crazy’ in to learning how it worked and the many different settings you can tweak. However, as we get better and better, we’ve been able to work on our judgment skills of when take advantage of this amazing effect, how it will benefit our mixes and individual tracks, and overall help spark some creativity when it comes to adding, in our own words, ‘cherries on top’ of our tracks.

Delay is one of our favorite types of VST effects, and it has a pretty particular sound that may seem like a simple ‘echo’, in reality has a lot going on in the shadows of the effect. Many people, especially your average music listener who isn’t a musician or producer, rarely even notice it at all. It’s more of a ‘behind the scenes’ effect that merely brightens and fluff up some of our tracks, or ‘the end’ of them. To us it’s a staple point in effects for music, alongside reverb FX and compression FX.

Delay FX work by recording input signals and stores them in an audio-based medium after which it plays these signals back in specified time intervals. Normally, the playback is quit rapid as it takes milliseconds to reload. In such cases, a delay VST produces snappy and immediate reverberations of the original sound, commonly referred to as the snapback effect. On the flipside, some prefer to use extended playback periods which in turn produces gushy walls of deep sounds. Such an effect is best suited for atmospheric landscapes. Ideally, the goal is to create a decaying, repetitive kind of echo. In both pronounced and subtle ways, this audio effect is the underlying force behind the majority of modern day performances.

Depending on the model or make, a delay FX VST offers users immense flexibility on account of its wide array of settings. If you are just starting out on your musical journey, here are some of the basic delay parameters:

With that in mind, here are the best delay FX plug-ins to help your search in the effects world. We highly recommend trying a bunch of these out (pretty much all of them have trials) — we use quite a few different delay effects depending on our mood, so don’t be afraid to buy or try out multiple. We’ll link you to their trials.

Here is our absolute favorite delay FX plugin and we literally use this every single track we make. It’s just so easy to use and effective, and sounds beautiful. In addition to its ease of use, it also offers users a great deal of versatility with its advanced controls. It’s single Echo helps you keep it simple while the Ping-pong and Dual Echo are used for more robust echoes. In fact, one can choose from up to 30 distinct preset echo styles including Dm-2, Echoplex, and Memory Man, to name just but a few of our favorites.

On the other hand, those looking to create a deep analogue sound can use the tape flutter, diffusion, and control saturation parameters. Other notable features that make Echoboy an ideal delay VST for groovy reverberations include accent, shuffle, and swing controls to help you customize that delay sound you’re looking for. With lush echoes, organic richness, and immense attitude, it is easy to see why Soundtoy’s Echoboy is ranked among the best delay FX VSTs of today. 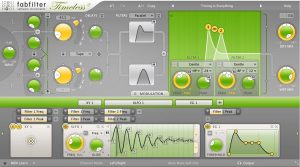 Looking for a delay virtual instrument to help produce crunchy and modulated delays? The FabFilter Timeless 2 is one of the best delay effects VST for the job. It’s feedback and filtering abilities are of solid quality and it features two multi-mode filters into which delay signals are fed, before getting routed back into the signal chain using either the cross-feedback or feedback knob. What’s more, it features phase inversion for each channel which can create phasing and flanger effects. Other notable features include drag-and-drop modulation, MIDI learn, AltiVec optimization, and some ‘Smart Parameter Interpolation’.

Creativity and versatility are some of the primary attributes of Melda Production’s MSpectralDelay. As one of the best delay FX VSTs in the current market in our opinion, this plug in has the ability to conduct an extensive selection of frequency transformations to help create rhythmic reverberations. Its advanced GUI allows users to get as creative as possible, therefore is one one of our favorite delay FX software that will take some time to learn if you aren’t familiar with advanced parameters plug-ins use. But it is in our opinion well worth the time to invest if you can.

It is resizable, stylable, and accelerated. What’s more, it features a ‘edit’ and ‘easy’ screens. The latter is designed to help beginners get a hang of the virtual instrument before graduating to the more cumulative and technical edit screen. It also features a safety limiter, AGC (automatic gain compensation), adjustable sampling (16x-1x), and smart randomization on top of it all.

Vintage tape echo, oversampling of up to 16x, spring reverb, a randomizer, and 3 tape modes are some of the key technical specifications that make AudioThing’s Outer Space one of the best delay VST effects plugins. Three distinct tape frequency saturation and responses have been modeled together to create a nice quality emulation of the vintage tape echo all of us analog lovers are infatuated with.

In fact, a couple of analog imperfections have also been included in the mix to create a more realistic tape echo, giving this some of our favorite warm and vintage sounding delay effects out there. It also features a ducking control, rate ballistic control, preamp switch, 1 pan per head, pre-emphasis filter, and a feedback low/hi cut. 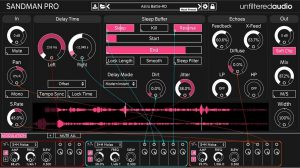 Rightfully so, Unfiltered Audio describes Sandman Pro as the Swiss Army knife of delay VSTs. This is largely due to its wide array of features that allows sound engineers to create articulate traditional and contemporary sounds. One of the primary specifications featured in its narcoleptic bent is the Sleep mode which freezes the delay buffer to facilitate the creation of high-end grains and loops.

Better yet, these reverberations can be modulated, reverse-played, re-pitched, and down-sampled. Essentially, its ability to conduct all manner of sound transformations makes this one of the best delay effects VST and the amount of controls we have at our fingertips may be overwhelming, but again well worth the time to invest if you really want to take matters into your own hands.

When it comes blending both old school and modern delay effects, the Waves H-Delay is arguably one of the best delay FX VST. It features traditional PCM42-style effects such as flange, and filtering. It also features contemporary effects such as the ping-pong delay, tempo-sync, and the slap-back echo.

As is customary of Native Instruments, they have produced yet another high-end musical gadget in the form of the Native Instruments Replika XT. It is ranked as one of the best delay effects VST on account of straightforward user interface, comprehensive effects package, and more importantly, flexible studio-quality delay. Also, it includes 5 delay modes that have been modeled to create clear digital repeats with experimental textures and analog warmth. These include Modern, Analogue, Vintage Digital, Diffusion, and Tape.

From hazy analogue sounds to precise modern repeats, the Replika XT has them all. Better yet, users can mix these modes with pitch and time-based effects to add motion and shimmer to their reverberations. These include phase, flanger, chorus, filter, micro pitcher, frequency shifter, and the pitch shifter.

The Cooper Time Cube is a recreation of the original version which was a cult classic in the 70’s and 80’s. Dating back to 1971, the original Cube was reputed for it’s ability to blend nicely with all manner of mixes and was used in a number of hit songs including War’s ‘Low Rider’ and Rufus’s ‘Tell Me Something Good’. This FX combines the classic features with modern parameters such as Pan, Delay, volume, control, and Decay. Combined, these features make for a great analog choice of the best delay FX VST.

With its wide range of features and sounds, the Repeater is fully capable of adding immense depth to your mixes. What’s more, its Spread option allows music enthusiasts to spur wide stereo delays as it has automatic spanning and deviation effects.

One can also bury or forward the repeats in a bid to intensify the delay’s color. The Repeater Delay is ranked among the best delay effects VST of toady since it incorporate up to 23 pretty good emulations of classic delay instruments.

Among its primary attributes is optimal flexibility which is made possible by its wide array of features. In the list is its delay time which offers users flexibility with its extensive range. Additionally, the tempo and delay can also be synchronized for a more uniform reverberation. To this end, its resolutions range from 1 bar to 1/128 which helps users regulate the interpolation of delay-time in accordance with the system’s time constant.

Compared to the previous version, the newest version features a number of enhancements. The most notable upgrade is its universal binary support. However, this is limited to 32-bit MacOS 10.4 system of higher. Either way, the Smartelectronix Analog Delay remains to be one of the best delay effects VST and ends our guide off strong.