Once we started to learn how to use compression FX, we really took our music to the next level. As opposed to just turning up that volume, compressing sounds gives us a nice and clear, compact and tighter version of it’s original. In the old days, we used to have to buy thousands of dollars of equipment to actually compress or music, but nowadays with beautiful technology, we can merely download a free version of a VST or spend a few bucks on a higher-end plug-in and voila — we have thousands of dollars of FX equipment at our fingertips in our DAW.

What is a Compressor FX Plugin?

A lot of music analysts describe compression as the most misunderstood effect utilized by musicians. This is attributed to the fact that it is inaudible if expertly used which makes it hard for the ordinary person to identify it as an effect. Technically, a compressor is used to control signal dynamics, such as the variation between loud and quiet sounds. This way, listeners will not be forced to turn up the volume in order to hear more of the quiet notes incorporated in the mix. If you’ve ever done an A/B test of a track with compression (even something as little as a drum sound with it on or off), you’ll notice a huge difference in merely the entire quality of the song, let alone the power and ‘kick’ you can achieve with a solid compressor FX plug-in.

Therefore, compressors are integral to all music setups — from home studios to stage arrangements. One can practice from the comfort of their home at odd hours without worrying about waking the neighbors and bands can play their jams at a reasonable volume without worrying about the audience missing certain notes. By and large, compression works towards increasing the tone’s body, adding sustain and thickening the sound as a whole.

Understanding compression is going to take some time, but is doable! As stated earlier, to pick the right compressor FX software for the job, musicians are required to fully understand both the nature and functionality of these tools. They tend to operate in a rather complex manner given that they work as automatic controls for the volume. There is a set level from which the compressor turns up the volume if it goes below this point and turns it down if it goes beyond. Usually, this process happens more promptly than manual volume regulation. As such, there is need to do this expertly in order to allow for transparent functioning of the compressor such that it takes nothing away from the overall sound. To achieve this, it is paramount that users internalize all the basic terminology surrounding the use of a compressor. These include:

Up first, Softube FET is one of the best compressor FX VSs largely due to its FET circuit which allows it to come up with short release as well as attack times. What’s more, it features release potentiometers and backward attack, thus, offers users heightened tweakability. It’s a bit advanced so you’ll have to take some time to learn it, otherwise you can always just crank up that compression knob like we do until your sound is as powerful and fat as you want.

In addition to parallel compression, this tool also features ratio controls, gain, and threshold. The parallel compression beats an auxiliary track with regards to blending the compression into your mixed tracks. Also, its tweaking abilities has further been enhanced by their low cut side chain switch.

The Native Instruments VC-2A boasts of a low cut detector, a side chain input, and automatic release as well as attack; some of the standout features that make this one of the best compressor FX plug-ins. To add to the mix, it has a slow to medium speed response rate which allow users to create natural sounding sounds. This electro-optical compressor is favorite among novice music engineers due to its ease of use. Dialing in the optimal structure is relatively easy given that it features two of the most basic compressor controls — peak and gain reduction.

The latter is used to control compression amounts while the former controls the threshold. Lastly, the tool’s ‘electro-optical technology’ is notably appreciated by users. The LED usually glows brightest when the signal is at its peak while a relatively strong signal simply makes it glow regularly. Using its photocell tracks, this technology allows for optimal gain regulation.

Let’s talk about some pure power. Here’s one of our favorite free compression FX plug-ins. This is a multi-effect compressor that offers multiple distortion sounds that are blended to produce different textures and tonal variations. As such, it is ideal for a wide variety of instruments including drums and guitars. Among its standout features is the low-pass filter which offers users immense resonance. It is smooth and produces warm articulations.

However, its ease of use is what makes the Camel Crusher stand out as one of the best compressor effects VST. By simply turning up the amount knob, one can easily fatten the sound pattern and much more. Sometimes that’s all we do — just crank it up! They also have some nice presets to mess around with — it only took us about 10 minutes to get a hang of it. 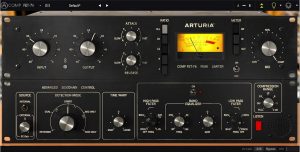 Arturia defines the FET 76 as a “legend reborn for the 21st century”. Rightfully so, this impressive compressor VST is a near perfect emulation of the original hardware as it features a number of powerful yet subtle traits that make it an ideal pick for the modern studio. Among this is the ‘side chain control’ which is quite advanced compared to other compressor plugins. It allows users access to a mid-side processor which allows for tailored sound processing and an SSL-style equalizer.

What’s more, it has time warp abilities given that even the slightest pre-delay extensions go unnoticed. Also noteworthy, the output-input link button makes it possible to maintain set volume levels while you go about boosting the input. As such, users maintain a steady volume while still getting a compressed sound. Combined, these features qualify the Arturia FET 76 as one of the best compressor effects VST models in the market right now.

Most reviews have described the Teletronix LA-2A as a studio legend due to its longstanding reputation as a good quality compressor. This optical compressor features a tube output and relatively slow release as well as attack rates. It is considered to be one of the best compressor FX VSTs due to its intense character and ultimately warmth which has made it feature in some highly rated singles.

Being an optical compressor, this tool is more ideal for instruments with a smaller amount of vocals as well as transients. In the past, the LA-2A has been commonly used with vocals and bass majorly due to its smooth gain reduction. The tube output stage is also known for its warmth which makes it the right tool for bass instruments. 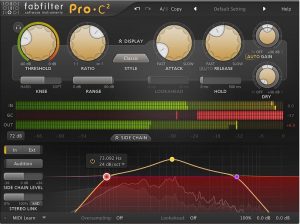 For individuals looking for an all-round plug-in, then the FabFilter Pro C2 is arguably one of the best compressor FX software picks of today. It features 8 compression styles, a side-mid control, over-samples 4X, and lookahead gain reduction. What’s more, this tool affects every channel independently. Using the 8 styles, users are able to color their mixes and add customization to the entire setup.

The more recent version contains an additional 5 modes — punch, pumping, bus, mastering, and vocal. This way, you get to enjoy tailored responses that go hand in hand with the projects at hand. Also noteworthy, the FabFilter Pro-C 2 features a more detailed metering system with optimized accuracy as the meter sizes have been enlarged. 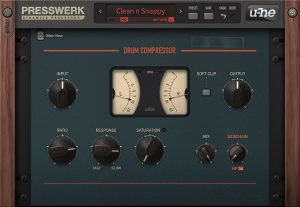 Up next, U-He Presswerk offers users solid performance with its rich list of features and easy to use interface that make it another one of the best compressor FX plug-ins. One of its prime features is the soft clip that comes in handy whenever the output levels go exceedingly high given that they roll off any harsh peaks. Ultimately, this gets rid of any distortion within the output.

Secondly, this compression plug-in is desirably loud making sure that all your tones are audible. Lastly, its compression envelope and curve can be adjusted. This allows for optimal tweakability with specific regards to multiple controls such as compression ratio, release, and attack.

Thanks to Waves, sound engineers now have access to a new age console with the legendary glue effect. This is the CLA-76 which offers users increased glue for your mixes as well as an extensive vintage coloration range. In addition to this, the plug-in also features a modeled analog hum which goes a long way in enhancing the tool’s coloration abilities.

Combined, these features make this yet another one of the best compressor plugins. We’re big fans of Waves software.

Softube’s TLA-100 is a popular choice especially for bass placement as well as vocals due to its robust grab of the original sound source. It is a steady option for individuals looking a compressor VST works equally on all kinds of material. However, its strength lies majorly on its ease of use which goes a long way in making it one of the best compressor FX VST options in the current market.

Given that its operations are heavily dependent on its program, this virtual compressor makes majority of the major mixing decisions on behalf of its users. Nonetheless, it tends to produce some soft distortion if it is pushed to the limit. Its saturation knob also adds to its ease of use as it allows users to mix in the right distortion amount to the signal. 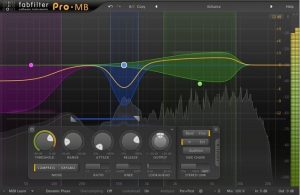 FabFilter’s Pro-MB is a simple single multiband compressor with heightened flexibility, good sound quality, and fluidity. Its ease of use stems from the ‘Dynamic Phase mode’ and its visual feedback interface which allows users to make accurate tweaks where needed while still producing natural sounding articulations.

Other notable features that make this one of the best compressor FX VST in today’s market to finish our guide strong include M/S volume, bypass alternatives in addition to band mute/solo, 4x oversampling, and parallel processing.

It is impossible to have a complete music toolbox without a compressor — sometimes we get a little too compressor happy and just do each track separately! No rules — as long as it sounds good, honestly. Their versatility surpasses all other elements of one’s musical gear when it comes to dynamic control, mix glue and coloration, hence, marking their importance to the whole setup. However, digital and analog compressors tend to vary in terms of functionality. This makes it overly difficult for users to pick the best tool for the job especially in the case of digital compressors. Analog compressors on the other hand contain different circuit designs that tend to make certain models more ideal for particular jobs as compared to others.

As such, choosing the right plug-in for the job can be a rather daunting task for many. The trick however is to ensure that one fully understands the nature of various compressors and their functionality. Make sure you do your research but in all honesty, many of these offer some free trials or are just super cheap in general so our biggest piece of advice is this — don’t be afraid to mess around and experiment until you find the right compression FX plug-in software for you!