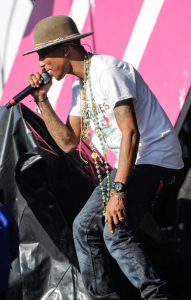 Nowadays, it seems like everything is getting the wires taken away from them. Televisions, computer parts, you name it. With that being said, one of the most popular devices for being wireless and has been for quite some time is microphones. Having a mic without wires is very beneficial for not only performing music on stage, but numerous other activities, such as  seminars, karaoke parties, and merely anything else you can think of needing to project your voice without the use of wires holding you down. There are plenty of options to choose from when it comes to wireless mic solutions, so which one is best is pretty much determined by you. However, our top aspect to take into consideration is your budget.

If you’re looking for merely the best microphone for performing on stage, read our article for more information. Perhaps the best recording microphone, which we highlight the best condenser microphones to record with. With a lot of these, you just can’t beat the reliability of the wired microphones used by artists around the world. Some of the most powerful dynamic mics out there require a wire; however, if you absolutely need a wireless mic, we have the solutions here in this article. If you want to compete with some of the better mics for stage then you’re going to have to spend some money on a system that comes with both the microphone and a transmitter (and sometimes a converter). Otherwise, you’re looking at relatively cheaper microphones without wires that have some drawbacks.

What to take into consideration with wireless microphones

Here are just some tidbits to keep in mind when shopping for your wireless mic. These are based on personal experiences we’ve had as well as what many others have stated when it comes to using a wireless microphone.

How to choose your wireless microphone

As stated previously, we can’t really give you an absolute best because it really depends on your budget. How good would it be if we picked a $200 wireless mic and you were willing to spend more? Or the other way around, choosing a mic that is way too expensive? We chose our favorites within each budget range to give you some flexibility. Wireless type, range, number of channels, feedback resistance, sound-pressure handling and frequency response are the most important factors when buying a wireless microphone, so we help provide those for the models we’ve chosen as well. Let us know which you’ve chosen! 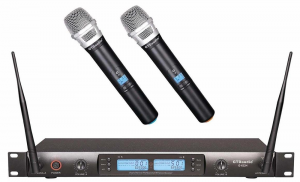 Yes, this one comes with two, but for good measure. GTD Audio is a little less known than other brands, but the reviews on this one are extremely positive. It has 100 selectable frequencies on each channel and allows up to 30 units to be used simultaneously. A great for-the-budget system, especially if you need two microphones. The range holds up to 500 feet so it’s got more than enough space from you to the sound source unless you have a less traditional setup. The frequencies are from 610 MHz to 680 MHz. Remember, as spoken before this is a UHF system, so it’s a bit better than the VHF and digital in terms of quality, but it runs a risk of interference (albeit rather low). An incredibly good deal in terms of a wireless microphone, and if you want one that’s easy on the wallet yet still provides excellent audio quality, this is the one to get. 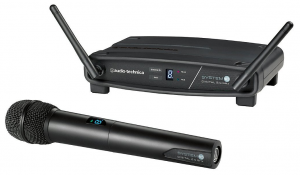 As most of you already know, we are huge fans of Audio-Technica equipment, and this is just one of their many wireless microphone solutions. We’ve chosen this because its just about the lowest we’ll go in terms of price with wireless mics worth looking at. This particular model has gotten a lot of positive reviews, mainly due to the dual channels, high quality, digital (no interference, remember!) 24-bit/48 kHz operation, and most of all, the automatic frequency detection so you don’t have to worry about the setup.

The sound quality is very good, competing with a lot of wired Shure mics out there. Their ‘System 10’ can be used up to eight channels, but the receiver can only detect one transmitter at a time. You also have some options for what the receiver comes with if you want a solution other than a handheld microphone. Audio-Technica knows their stuff when it comes to microphones, especially wireless systems. Just a very convenient, quick and easy wireless microphone system, and one of the best in our opinion.

Here’s one of our favorite wireless mics available today. Shure microphones are absolutely solid when it comes to voice solutions, as most of us know due to their reputable brand name across the music industry. We recently reviewed their legendary SM58 dynamic microphone and have found it to be one of the best microphones for performing live with. In this case, you have the SM58 in a wireless version in a few options in terms of frequencies. It has a great high output but low gain make, giving us a solid cardioid pickup pattern that reduces feedback. Very solid distance within an average of 300 feet of wireless capability as well as quick and easy matching with the receiver (using a group and channel selection). When you’re using the microphone, it has a nifty LED light to give you a ‘green’ ready notification and also some red flashing for problems or dead battery.

For help with knowing which frequency to buy, look at their BLX Wireless Compatibility Frequency Bands Supplement. Also check out their headset if you’re interested in that option. Otherwise, we think the frequency we’ve provided in the link above should suffice and works for most!

One important thing to note with Shure’s wireless microphone receivers and transmitters: you can mix and match as you please. They also sell each piece individually, and there are two more handheld microphones available: the PG58 microphone (stated to be for live vocals & karaoke) as well as the BETA 58A transmitter (listed to be for live vocals & podcast/voiceovers). Just remember you’ll need some source of receiving in order to fully work the wireless capabilities. These run for almost $300 each, so sticking with a package like what we’ve provided is typically a better route.