A wireless in-ear monitor system is going to pave the way for a top-notch performance by many musicians in the world today. Not using a monitor system can technically get you by, but to be on the next level to ensure your music is optimal for your audience, you will one-hundred percent need at least some type of monitor system especially if you’re playing a larger show. As seen in our in-ear monitors guide, we’ve received a lot of feedback on the usefulness of that article, so today we wanted to fine-tune our search even further to simply wireless solutions for those needing in-ears. Let’s first get into some other details before we check out our favorite systems.

Technically, you can mix and match your own wireless transmitter with a wireless receiver, and simply plug in any pair of in-ear monitors as you please. Many do prefer this method since it gives them a lot more flexibility in regards to the setup and what you feel comfortable with, especially when it comes to the actual monitors themselves. However, others would prefer an already set up wireless in-ear monitor system to not risk compatibility issues, as well as have confidence from a particular brand when it comes to knowing that they’ll work seamlessly with each other. It’s also a great solution for those who aren’t working with professional sound engineers and need to do it themselves. That’s where our focus has been today.

When sifting through our recommended picks (there aren’t many out there — we only came up with 7 we felt confident with, although we ended up choosing the “best” of some that are part of a large series), there are a few factors to keep in mind. One is obviously budget, but we’ll be up front here and disclose that these aren’t cheap. We don’t recommend grabbing a system that’s only a few hundred bucks, especially if you’re going to be on stage with a relatively large performance in your hands. The reason being is simply disruption, and although pairing up with a frequency that’s suitable is the ultimate deciding factor, the overall quality and technology placed into your system is also important. Many high-quality in-ear wireless monitor systems get into the thousands range.

You also want to keep in mind how many monitors you need to be paired up. Some systems are limited to just a few, while others go all the way up to 16. Are you powering up an entire band? Just the singer? A singer and guitarist? Aren’t sure yet? Grab a system with a few just to be safe. Lastly, there will be other features that may perk up your ears that will justify cost. Aside from channels available, look into special technology that aids in the strengthening of wireless signals (there is never too much), as well as other key specs you feel you’ll need (such as auto scanning, graphic displays for your engineer, rack mount friendly, limiters, pilot tones, and more). 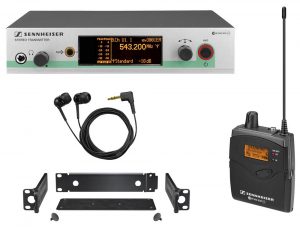 As one of the more recognizable audio equipment companies around, it is no wonder that a Sennheiser monitor is starting off our list of the best wireless in-ear monitors on the market today. The EW 300-2 IEM G3 is a high-end in-ear monitor double set, complete with snug, form fitting ear-canal headphones and an ultra-adaptive diversity receiver, so adaptive that it can even utilize the headphone cable as a backup antenna to ensure a crystal-clear reception. Additionally, with a nod towards long-term durability and longevity in general, the monitor system bundle comes sheathed within a sturdy all-metal housing and packaged with an included additional body pack and set of earphones (with numerous custom ear-fitting pads for a specialized fit). Moreover, with Sennheiser’s trademarked “Wireless Systems Manager” and the stereo transmitter’s built-in Ethernet port, the entire set can be controlled and monitored remotely, allowing for near hands-free usage if that’s what you intend on going with. 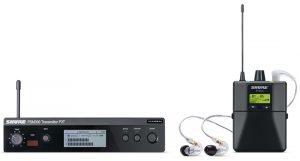 Next up on our list of the best wireless in-ear monitor systems available on the market today is an offering from another audio engineering powerhouse, Shure, and their impressive, highly rated P3TRA215CL monitors. Featuring their custom-trademarked SE215 Sound Isolating Earphones, this model is a part of the popular PSM 300 wireless systems family, which also includes the P3TR112GR wireless transmitter. However, as the more expensive and higher-end model, the P3TRA215CL includes all of the features of the P3TR112GR and many more. An ease to setup and use, the in-ear monitor system offers complete wireless freedom with an over 300-foot connectivity range, allowing the artist to roam and control the stage without fear of signal loss or feedback. 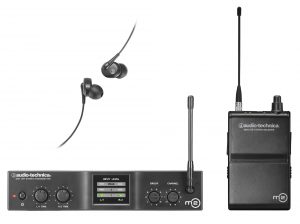 With a focus on a professional yet accessible and affordable in-ear monitoring system, the Audio-Technica M2 is next on our list of the best wireless in-ear monitor systems. Built for performers tired of the encumbrance involved with traditional bulky floor wedges, the M2 boasts a fully wireless, high-fidelity sound, allowing for a clean, precise mix at both high and low volume. With surprisingly easy-to-use controls located on the attractive M2 stereo bodypack receiver, it even allows for mix and volume control of independent dual-signals through Audio-Technica’s trusted Personal Mix Control. Equipped with two XLR1/4” combo input connectors, the M2 offers up to 100 selectable frequencies through the wireless UHF M2T Stereo Transmitter, allowing for an unlimited number of receivers all used on the same frequency with just a single M2T transmitter. Similarly, the system also allows for up to 10 simultaneous systems per frequency band.

In addition to this, the well-reviewed Audio-Technica M2 boasts three receiver modes (personal mix, stereo, and mono), easy-to-read LED indicators, XLR loop output connecting the signal to the mixing console, adjustable squelch, limiter, and pilot tone. Though this may seem like quite the bundle, it is also fully portable, allowing for a quick and easy setup and breakdown. Plus, with the proprietary earphones (with three sizes of included rubber eartips & ear-conforming foam tips), the Audio-Technica M2 is a shoe-in for our list of the best wireless in-ear monitors on the market.

At the higher end in terms of price point (compared to others on this list) and next on our list of the best wireless in-ear monitors is the PSM 1000 from the audio giants over at Shure once again. Offering dual-channel’s, the system is proudly geared towards touring musicians seeking a wireless monitoring system. With a diversity bodypack receiver and both stereo and mono modes, the PSM 1000 does not disappoint. A full-rack housed in a tough, all-metal chassis, the in-ear wireless system is built for the rigors of life on the road. It even offers networked control via an Ethernet connection to ensure even high-channel counts do not impede the ease of setup. Reviewers praise the PSM 1000’s clean, strong signal, a testament to the precise front-end RF filtering within.

Additionally, as the in-ear system is fully backward compatible with PSM 900 transmitters and receivers, artists can easily consolidate inventory management while touring or moving between studios. Plus, with Shure’s ‘Wireless Workbench Software‘, the monitors can be controlled via the included remote control. Though at a price-point higher than most, the Shure PSM 1000 delivers and gets us to the middle of our guide with a spot as another one of the best wireless in-ear monitor systems. 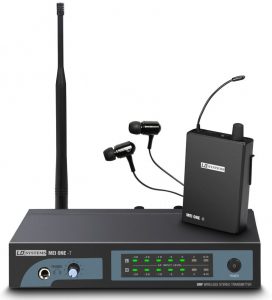 Though you may not have heard of LD Systems, their aim is to provide some of the best wireless in-ear monitors at an attainable price-point lower than most competitors. Their MEI ONE in-ear monitors do not disappoint. Promoted and praised by LD Systems as “the perfect in-ear monitoring starter set”, the MEI ONE actually delivers. Both affordable and powerful, the LD Systems MEI ONE boasts three different fixed frequencies, each operating simultaneously with one another and without troublesome interference. And, with the ability to use any conceivable number of beltpack receivers with only one transmitter, the entire band will all be hearing the same thing at the same time, something praised by users.

Composed of a 9.5” transmitter with 2 x XLR / 6.3mm Jack inputs (in addition to level controls), a beltpack receiver with belt clip, adjustable headphone control, RF receiver LED, and antenna/battery compartment, it still manages to offer numerous accessories, including: AC adapter, stereo in-ear phones, 19” rack mounts, carrying case, and more. Though cheaper than many on this list, the LD Systems MEI ONE is still one of the best wireless in-ear monitor systems for those needing a more budget-friendly pick. 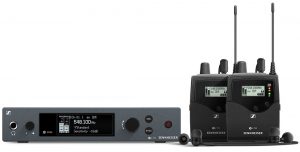 Coming in next on our list is another offering from popular Sennheiser, this time for their EW IEM G4 Twin wireless monitors. At a price-point towards the middle of the pack, the EW IEM G4 Twin is built with professional and pristine live sound in mind, without approaching a price point out of reach for most. As a complete, all-in-one monitor system, the system frequently praises the power of their bodypack receiver, something reviewers seem to agree on. This, along with the trusted IE 4 in-ear monitoring headphones, allow for a clean, precise sound throughout the frequency spectrum without sacrificing power or quality. Like others on this list, the Sennheiser EW IEM G4 Twin is built for the road and housed in a durable full-metal shell, an OLED display allowing for full manipulation.

Users frequently note the ease of wireless syncing, a nod to the powerful infrared transmitter and receiver within. Additionally, it is fully compatible with the famed WSM control software (like the other recommendation) from Sennheiser, allowing for incredibly flexible frequency allocation. Moreover, with up to 16 compatible channels, a 42MHz bandwidth, and 1680 selectable frequencies, the Sennheiser EW IEM G4 Twin is by far one of the best wireless in-ear monitor system if you’re a serious one. 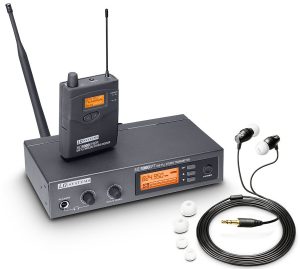 Last but not least, LD Systems is showing they are some of the best wireless in-ear monitor systems around with their second spot on our list, this time for the MEI 1000 G2 monitors. As a license-free monitoring system boasting 96 UHF channels, the MEI 1000 G2 puts an emphasis on a large dynamic range with optimal crosstalk behavior (in the 823-832 and 863-865 MHz frequency band). Adjustable EQ and limiter functions and switchable mono, stereo and focus monitoring modes allow for top-notch sound reproduction, no matter the application.

Similarly, with a frequency response of 60-16 Hz, a high S/N ratio, and low THD, the LD MEI 1000 G2 allows for up to five systems operating simultaneously. Plus, with an easy-to-read display, a 19” rackmount kit, tough ABS plastic carrying case, WS 100 AB antenna amplifier, WS 100 TNC 10 antenna cable (both TNC to TNC .05mm and TNC to TNC 10mm), WS 100 DA directional antenna, and user-noted ultra-comfortable headphones, the LD MEI 1000 G2 offers all the necessary bells and whistles to earn our last spot on the list of the best wireless in-ear monitors around today.