We run our vocals through correction software here and there. It still feels a bit ‘weird’ (for lack of a better term), it really does. But at the same time, you either need to get with the program or stay in the past. It just is what it is — most musicians have some form of vocal FX plugins, more specifically today with pitch correction tool in their toolbox. Whether they use it every single track or just here and there is up to you. We just think of it this way — it’s only going to make our songs that much better! We digress — here’s our collection of the best vocal pitch correction and auto-tune plugins in the market. A lot of these are for minor edits to get a few words right, while there are some that give you that obvious Auto-Tune (including the plugin itself) sound if that’s what you’re looking for. 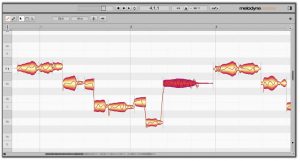 With its ability to allow the sound engineer to edit voice recordings note by note, Melodyne has earned its reputation as one of the best vocal correcting plugins on the market. We use this just about every track, even if it’s for a slight nudge here and there for a word that bothers us.

Sophisticated software offers above quality analysis of the recording to allow for accurate pinpointing of areas for correction. Melodyne is ideal for adjusting timing, tone, tempo, and chords for both vocal and instrumental aspects of your recording. This plug-in makes the process easier because it recognizes and utilizes the relationship between the notes and its algorithm uses this in its corrections. Instead of the recording being shown as a wave, Melodyne presents each note as a blob, allowing for easier isolation of problem areas that need pitch correction. You can also elongate notes to flatten them out. Because of its intuitive tools and macros, the user can edit rhythms, dynamics, and formats by hand with a high degree of accuracy.

The multitrack note editing feature makes it possible to work in a single window to edit multiple recordings at the same time. Melodyne is operated using ARA, as a plug-in for a DAW, or as a stand-alone program. We recommend using it in a DAW so you can edit real-time or during the actual recording process to make sure it’s down pat. Melodyne has been recognized for its excellence with Grammy, Sound on Sound, and Electronic Musician awards to its name. With music producers who have worked with some of the world’s most famous singers and bands endorsing it, Melodyne is a worthwhile investment for anyone wanting to do high-quality post-production vocal pitch correction work. 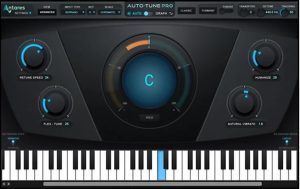 Whether you’re a beginner or seasoned sound engineer, Auto-Tune Pro is regarded as one of the best vocal correction FX software programs you can choose, mainly because their name has literally become the label for the masses when it comes to any type of software that corrects vocals.

Auto-Tune Pro is the latest version of Anteres’ game changing vocal pitch correction software and includes additional features for effective corrections and editing. Included in the Pro bundle is ‘Auto Mode’, which allows for correction and effects in real time, ‘Graph Mode’, which is ideal for timing and pitch editing, and the ‘Auto-Key’ plugin, which detects key and scale automatically (this one is huge). In ‘Auto Mode’, the user can access the ‘Basic View’ for easy access to its core features or ‘Advanced Mode’, which features MIDI, scale editing, and vibrato control. ‘Graph Mode’ is essential for pitch editing and allows the user to take control over every aspect of a vocal recording, including timing. The ‘Auto-Key’ plug-in makes short work of enhancing recordings by detecting the key and scale and applying it to all instances where Auto-Tune has been applied.

An additional feature of Auto-Tune Pro we like is classic mode, which includes throat modeling, formant correction, and low latency processing. Anteres gives us the opportunity to use their old layout which a lot of producers became accustomed to here. Also, the ‘Flex-Tone’ and ‘Humanize’ functions assist with creating natural-sounding tuning for a vocal recording. The 64-bit download is compatible with both Mac and Windows, although you should check the specifications before committing to the product. The user-friendly screen and tools make Auto-Tune Pro a must for vocal post-production mastering processes. They have a free trial for the first week (we believe) where you can try it out! Definitely the best auto tune plugin because it literally is the real deal. 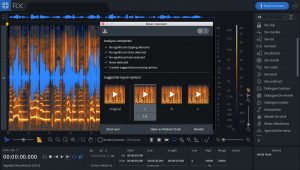 With iZotope RX 7, post-production becomes more precise while using reducing time spent on the process providing some of the best vocal correction effects available. Its most notable time-saving feature is the ‘Repair Assistant’, which does audio-spot cleaning by detecting background noises that need to be cleaned or removed. By selecting what types of sounds you want to eliminate, such as dialogue or music or even some static, the Repair Assistant will analyze the recording to identify them for you. Among the RX 7’s features are plug-ins that provide the sound engineer with de-ess, de-crackle, and de-reverb options to optimize recording quality. The music rebalance tool identifies the vocals and individual instruments, allowing for quick adjustments to produce the desired sound.

Another very useful feature is the dialogue contour function which allows the user to improve the intonation of the recording without re-recording. Using dialogue de-reverb provides the user with the opportunity to eliminate or tone down reverb from dialogue recordings. iZotope RX 7 is more than vocal pitch correction but instead a bundle of tools that provide the sound engineer with everything necessary to remove imperfections and add effects for a polished product.

RX 7 is available in three editions: Elements, Standard, and Advanced, tailored to suit individual needs, with Elements being the least expensive and Advanced costing the most. While RX 7 Elements is recommended for home studios, the user is free to upgrade to Standard or Advanced subject to iZotope’s terms and conditions.

For editing a recording, iZotope’s Nectar 3 provides several key features, making it one of the best vocal correcting plug-ins any sound engineer could use for post-production processes. By utilizing the ‘Vocal Unmasking’ feature, the user can analyze the content of a vocal recording and create pre-set effects that match the existing recordings vocals and instrumentals. This plug-in also allows the sound engineer to bring the vocals to the fore of the recording so that they do not get lost behind the music.

Nectar 3 of course also features a pitch corrector that also helps with tone color and an equalizer that allows for adaptive tone modifications. The user can also add up to four additional voices set to add harmony to the vocal recording. Add realistic special effects to the recording, such as reverb and reduce the effects of sibilance with the de-esser function. With the breath control feature, the user can clean up a recording by removing any unnecessary breath sounds from the vocalist. Featuring two vocal compressors, post-production dynamic balance has never been easier to engineer.

iZotope’s Nectar 3 is a mid-priced option, sitting between the less expensive Nectar Elements and more costly Vocal Bundle. Users can upgrade between editions should they find the need to do so. Weighing the price difference between Nectar Elements and Nectar 3 and comparing it to the features and options, it’s clear to see why most musicians opt for Nectar 3 to have it in their back pocket for not only vocal pitch correction but many other useful tools as well. 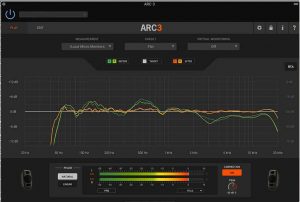 For one, the analysis tool provides accurate information that is easy to interpret and correct. The correction plug-in provides natural sound that is well-rounded despite the impact of acoustics in the recording. This reduces the need for costly room treatment to correct sound quality. ARC 3 also mimics the sounds of common listening devices, such as a radio by using virtual monitoring technology. IK Multimedia ARC 3 also improves the quality of frequency balance and stereo. ARC 3 is supported by Mac and Windows and the user-friendly interface makes working with it convenient and less time-consuming.

The IK Multimedia ARC 3 is ideal for any recording situation because of its ability to correct acoustics that might not be the right fit for a recording. It also supports the use of third-party measurement microphones, which is only one of the product’s new and improved features. When it comes to your ARC 3 purchase, you have the choice between buying the entire system including the microphone, software, and correction plug-in or buying the software only deal, which excludes the microphone.

With most users rating their experience with Waves Tune as highly favorable, there’s little wonder it is considered one of the best vocal correcting plug-ins. Whether the sound engineer is aiming to produce natural sounds or interesting effects, this plug-in makes short work of the task. Its pitch correction capacity makes it a must for any post-production processes.

With Wave Tunes, the user has the option of a wide range of pitch shaping and alteration options. It can be used in the DAW and does not require any offline work. Waves Tunes is also supported by Mac and Windows for ease of use. The pitch edit graph makes Waves Tune easy to operate and allows the user to pinpoint areas where pitch correction is required. This precision gives the sound engineer the chance to make specific corrections without affecting the rest of the recording.

Waves Tune sits as another mid-price option between the less expensive Waves Tune LT and the more costly Waves Tune Real-Time. It offers a versatile set of tools and correction options to make it well-worth the investment. Musicians have given it high praise for its accuracy and user-friendliness. Keep an eye out for discounts on the product, which include some additional free plug-ins. This one ends our best vocal pitch correcting plugins with a bang.