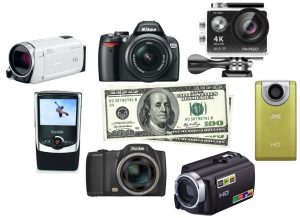 When it comes to shopping for video cameras, it can get a bit messy since there are not only so many different shapes and sizes out there but also price-points. Today we continue to provide our readers with more budget-specific reviews, and in our case today, some video cameras for budgets of under $200. It did take quite some time to make sure the models we gathered were even worth looking at in the first place, and ultimately we’re happy with what we were able to compile. But first, let’s look into some insight to read before we get into choosing the actual ‘best’ for you.

Just as we explained in our video cameras guide, let’s highlight a few factors for you to keep in mind while you read our roundups below. When choosing a video camera, there are some certain ‘specifications’ and ‘terminology’ you’ll be seen thrown around by camera companies when they market their products. To simplify it for you, here are some standard guidelines we’ll recommend for video cameras at under $200 or less: At least 720p resolution (no lower, please — although we usually do prefer at least 1080p; however, this price-point makes that more difficult to reach), SD card storage as opposed to on-board memory, LCD monitors\screens to help us navigate, built-in WiFi for easy transfer, and other additional features to help out our flow such as on-camera editing, image enhancement (red-eye reduction, image assist), auto-focus, and more. These last features won’t be ‘make or break’ by any means, but any additional help is always a plus.

The type of video camera you’re looking for will also deter you in a specific direction here. And if you have not chosen your ‘type’ yet, that will take us a step down into looking at what you’ll actually be using your video camera for. The $200 or less range is a bit limiting (as compared to perhaps under $500 video cameras). We’ll always recommend DSLR cameras for video since their lenses are interchangeable and provide the best quality; however, not many come in at $200 or less, and others may but the lenses could start to cost you. Others also feel they’re a bit too large if they’re traveling or prefer to hold their camera more steady. In that case, check out traditional camcorders with a strap to help keep it sturdy with one hand. There are also ‘compact’, ‘pocket’, or even ‘action’ cameras out there (we have a few below) to help with those in need of a travel camera or merely those on-the-go. We tried to find a bit of each to give you some options.

The Best Video Cameras Under $200 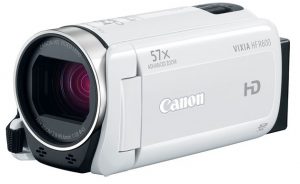 To begin, the Canon Vixia HF R600 is one of our top picks as the best video camera under $200, and this one brings us a reliable small compact build in the traditional camcorder look and feel. This camera has some simple yet useful features that makes it easy to use and is a great option for both advanced videographers as well as amateurs on a strict budget. Some of the top features of the HF R600 comes with are its variation of optical zooms, removable SD card, and 1920×1080 high-definition finish.

It’s also known for its whopping 57x zoom count which lets you get in close for those long distance shots you may be looking for. Reviews and overall consensus on this camera are great and many people recommended it for semi-pro and personal use. With these features and users rating the camera high to give us confidence, this camera is one of the best video cameras under 200 dollars. Not to mention that high-resolution, amazing zoom as well as sleek and compact build to give us versatility in shooting our video clips. 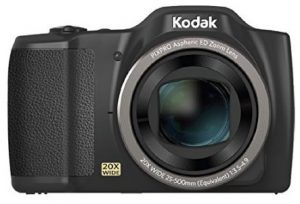 Next on the list we have the Kodak Pixpro FZ201. Coming in a more traditional and ‘DSLR-like’ build, the FZ201 has a wide variety of different options for the video and picture enthusiast. Although a bit larger than others, this one is still relatively small and compact to fit in handheld bags and makes it easy for any adventurous person to take pictures or videos in the blink of an eye.

Some of the standout features this camera has includes a 20x optical zoom, a 3 inch lens, and 720p HD video capability, 25mm Wide Angle lens (not interchangeable), 16 Megapixels in case you’re into photos as well, and a nifty Optical Image Stabilization unit to help you focus. The price range on this particular camera is in the higher range but still won’t put you over your budget. The simplicity of FZ201 is what sets the camera apart from the others cameras on this list which makes it one of the best video cameras under $200. 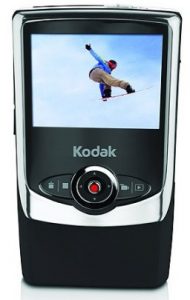 The Kodak Zi6 introduces us to a different shape and size that may be perfect for your travel or on-the-go uses for a video camera. This one has a sleek and slim design sets it apart from most modern-day recording devices. Considered a ‘pocket camera’ (which is a term we haven’t seen much the past few years), the Zi6 records high-definition video at 720p (60 fps with 16:9 aspect ratio) and makes it easy to upload videos to your computer for some post-production with its built-in USB drive. It also includes cables to hook up to you HDTV for a better viewing platform.

You have a nice color 2.4-inch viewfinder for easy navigation and viewing of your clips on-the-fly, and it uses an expandable SD/SDHC card slot up to 32 GB. The battery is rechargeable (both batteries and charger included in the box) so be wary if you’re going on long trips without an electrical outlet. Online uses reviewed this camera extremely well and is highly rated among the best cameras for under 200 dollars. 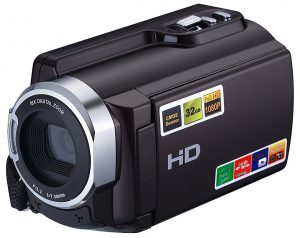 Rockbirds may not be as well-known as Kodak and Canon but that doesn’t mean they don’t have high quality camcorders. The Rockbirds HDV-5052STR is one of their signature cameras is for those looking to purchase a handheld video recorder for a cheaper price than other popular and highly marketed brands. It is stacked with essential features and more, such as night vision, WiFi, real-time broadcasting (essentially live since it has WiFi), long-lasting battery and 32 GB storage. Its small compact design also makes it friendly with travelers who carry cameras in small bags.

Some other specs include a 5MP CMOS Sensor, SD card support (doesn’t come with one, so buy it separately), and digital zoom (not optical, so it gets a bit choppy when you’re zooming but focuses once you’re done). It isn’t the most eye-popping video camera out there, but is still a feasible choice if you wanted a camcorder design and build at a budget-friendly price since this one is way under our $200 or less mark. 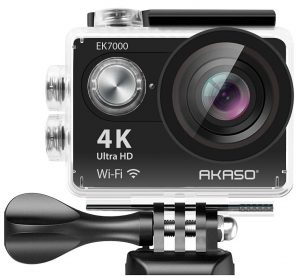 The Akaso EK7000 camera is a similar design to the modern-day GoPro — or shall we say, pretty much an exact design? Considered an action camera, its small build is great if you’re into action sports, adventurous clips or outdoor events. It easily attaches to many different objects such as helmets, cars, handlebars, and handheld sticks (the package does come with quite a few accessories and mounts so you can get going immediately). What probably stands out the most here is that it records in 4K ultra HD and has a 12 megapixel camera for photos — some of the highest in this guide. It also comes with a wireless wrist remote so you can start recording or snap pictures while you’re on the move.

Like the others, the EK7000 also comes with is the built-in WiFi — you can connect to the internet in seconds and upload your video straight to YouTube or edit the video with a phone app. Reviews on this camera were high and recommended by users who have purchased this model despite the knock-off brand name. The price range on this camera is not too high and lower than the majority of the cameras on the list while we’re at it. Overall this is one of the best video cameras under $200 if you wanted some action filming in your repertoire. 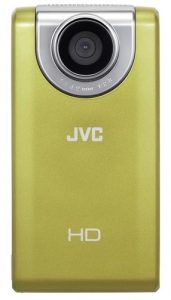 JVC has always been the budget friendly camera company and its no different when they came out with the JVC Picsio GC-FM1A. This camera has a simple design and resembles more of a phone-like shape. Although it’s the cheapest camera on the list it still has a lot of built-in technology to go along with it. Its records in 1440 x 1080p HD, has a two-inch LED monitor, and an 8 megapixel camera in case you’d like to take photos as well. If you’re looking to keep your budget low while still grabbing a rather versatile video camera in term of its size, this would be the best choice. It is missing some important features however.

It doesn’t come with a flash and in order to upload photos you have to insert the SD card into you computer to upload images and videos. Reviews on the camera were decent and did not compare as well to the Kodak Zi6 which shares a similar design, albeit it’s much cheaper so you’re getting what you pay for. All in all it’s still a great camera for under 200 dollars but id say it’s on the lower-end of the list for a reason.