One of the best ways to get your music out there is by making music videos. In order to do so, and especially if you’re on a budget, is investing in a good video camera that records in HD — preferably 1080p or 4K resolution. So which video camera is best for music videos? We’ve talked to camera enthusiasts, done some research and scoured around the net for reviews to determine which camera or camcorder is best for making music videos. What you need to take into consideration is first and foremost your budget, next the camera quality, and lastly certain features you think you may need or can deal without having by saving some money and getting the best bang-for-your-buck.

When it comes to music equipment, there are other devices you need besides recording gear. What’s cool about making music videos is the free of hassle from audio, unless you’re filming an intro, interlude, or outro with some dialog. But typically, audio is just overlapped with your song later in the editing room using video and production software. We’ve researched through the top best video cameras for filming music videos and have sorted them by price. We tried to get through all ranges, but if you’re looking for a relatively professional picture, you’re going to have to spend a decent amount of money for a long-term investment here.

The Best Types of Video Cameras for Music Videos

One of the most recommended types of video cameras for music videos is a DSLR or mirrorless camera. The higher in price you go, the better the quality. But going within the medium range is your best bet if you’re on a budget. A more updated list on a lot of the best models for this can be found in our best DSLR camera for filming videos or mirrorless video camera articles. Otherwise, continue reading for some more music video recommendations.

Note: Please keep in mind however that these cameras have a limit of 30 minutes per recording. You’ll simply have to press record again after the 30 minute mark since it automatically stops! Although we usually recommend musicians filming their videos with a cameraman, or at least some other help. If you are indeed solo (some of us have to grind!), just remember this, since our guide recommends a lot of DSLR and mirrorless cameras.

In terms of budget, we would go as far as saying nowadays you can’t really get away with not filming with a DSLR but the lenses can get very costly. So we recommend going around the $500-$1,000 range for a body and spend the other few hundred on a lens (if you can afford it). Otherwise, be our guest for an even higher budget — you can never go wrong with a full-frame camera that are often found in uses such as filmmaking.

Like in our video camera for YouTube article, we recommend a DSLR or mirrorless camera for video because of the overall quality, sensor sizes, versatility with interchangeable lenses, and control you have over the depth of field (the distance between the nearest and farthest objects in a  scene — helps with focus). Auto-focus is also extremely important for shooting a music video because you don’t want the picture to get blurry in the middle of a clip, especially if you’re moving around with you performing or showcasing some moves. DSLR’s have exceptional auto-focus speed, but mirrorless are even better here, which is great particularly for music videos. When it comes down to mirrorless vs. DSLR, it’ll just be a matter of personal choice.

We love this mirrorless camera considering we use it quite frequently in our every day lives. The attractiveness of this one is the combination of overall quality, stability, smaller size, interchangeable lens capability, and of course, affordability (at least compared to other mirrorless cameras out there, particularly Sony’s Alpha series — they’re all beasts). The reason why we like this camera for filming music videos is due to the exceptional autofocus, overall clear picture and beautiful detail when it comes to color.

It also has superb low-light (up to 25600 ISO), and 24.3 Megapixels. The advanced processor in this one really ousts many other cameras out there in this price-range (it’s pretty high up there compared to others in this guide, but well worth it if you have the cash). This is by far one of our favorite picks as the best camera for filming music videos in HD. 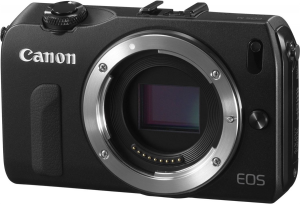 One of Canon’s best yet cheapest DSLR’s out right now. It’s surprising that this camera has 18 megapixel CMOS sensor in it. It’s also got Canon’s EOS Full HD movie mode for full HD filming. If you’re on a tighter budget and can’t afford the Rebel T2i, we recommend going with this. You’ll save some money on the body for the lenses you’ll need. It’s compatible with Canon’s EF or EF-S lenses (the difference between the EF and EF-S lenses is the ‘S’ are closer to the sensor and protrude into the mirror box. It’s stated to hep with better image quality, although not too noticeably. Note they can’t be mounted on full-frame cameras). Again, we like the Canon EF 50mm standard lens.

A surprisingly cheap DSLR camera — we consider this one a steal. If you go this route, you can perhaps buy more than one lens to get a change of shots for your music videos. 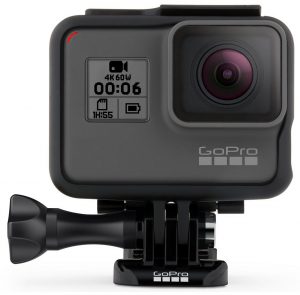 Here’s a little twist you can add to spice up your videos: a point-of-view camera. Although considered a smaller action camera, these have been used in music videos before and give it a nice little touch. You can use the footage to supplement if you want a change of perspective (maybe adding it to the body of a guitar? use your imagination). The wide-angle fish-eye view of the GoPro HERO gives you a lot of versatility when shooting, especially if you’re filming your music videos in lower light conditions. You’ve also got 1080p (4K 60fps if you go with a higher version), built-in touch display, Wi-Fi and Bluetooth support, great image stabilization (may have to do a bit more in post-production), decent photo quality, and loads of mounts to put it on your body or other objects you’ll be around. Although GoPro has recently put themselves up for sale, we don’t think these cameras will be going far away. Whoever ends up buying them may change the direction a bit, but this model here is their peak before they are sold.

There are also some other models in our best action camera article, so if GoPro’s seem a bit too expensive for you, there may be some cheaper alternatives out there if you’re still interested in filming your music videos with a different angle, spin and overall touch. We’ve heard of others even interchanging a POV camera clip with standard video clip to switch it up. 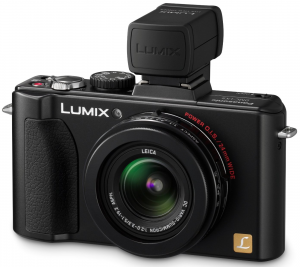 This definitely gives our recommended EOS Rebel T2i a run for its money, but only recommend going with this if you need to save around $50 or so. Another determining factor that may steer you towards this particular camera for music videos is it has the best low-light condition lens (yes, better than the DSLR’s). Some of the main features of the DMC-LX5 is a 10.1 megapixel (the DSLR’s are 18, however) CCD but is an ultra-wide angle lens and a 3.0″ “intelligent” LCD screen for some good navigation. Users around the net have given very positive reviews about the lens itself. It’s just about up there compared to the DSLR’s, but again, if you can afford it, go with the T2i.

Other versions of the Lumix DMC include the LX3 if you’re looking for a cheaper alternative. 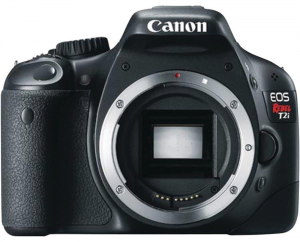 This is the camera we recommend. We’ve read around the net that it’s better to go with the T2i instead of the Rebel T3i. This is one of the best DSLR cameras out there and if you pair it up with the lens we’ve recommend above, your music videos are going to be professional whether you like it or not. Some major features of this camera is an 18 megapixel CMOS sensor, great bright or dim light capabilities (an ISO 100-6400 — a fancy word for light sensitivity), 1920 x 1080 (full HD resolution), and a great 3.0″ LCD monitor to help you navigate. If you can afford: get it!

However, if you can afford their even higher model, such as the Canon EOS Rebel T4i, it’ll only give you better quality. Regardless, the T2i is great considering you’re going to want to buy a lens or two to go with it. 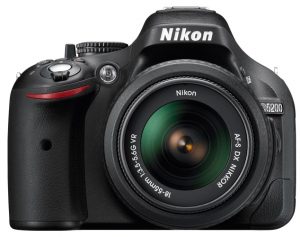 This is a step up from the T2i we recommend and do think you should take a look at it if you’re going for a camera in the middle price-point. The DSLR’s by Nikon rivals those by Canon and the D5200 has gotten some very positive reviews on the net by users worldwide, especially for those looking to film music videos without a thousand dollar plus budget. Some of the main features include a 24.1 megapixel CMOS sensor, 5 fps continuous shooting (the Canon’s don’t have this, but not necessarily a need for music videos unless you want to spice them up), and 16 scene modes (good for adapting to the scenes you add to your videos). You’ll need to buy a lens with this one as well.

The picture quality is overall better than the T2i, so if you spend the money, you’re spending it right. This decision is all up to your wallet, and whether or not you have a brand preference between Nikon and Canon. 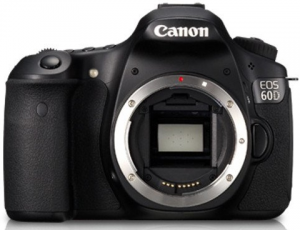 This is another step up in the Canon DSLR game. We’d recommend going with this if you can drop a solid $700 on a camera as well as a few hundred more for a lens. The 60D has an 18 megapixel CMOS sensor with a continuous shooting (5.3 fps) option. The metering system is also dual-layer and the back has a clear LCD monitor (like the others). This is just another step up, and if you have the cash and want a better body, grab this and the recommended lenses we’ve talked about.

Users around the net have talked about the 60D’s auto focus system, which is one of the biggest factors we’ve listed in terms of importance for music videos. You don’t want a shot getting ruined, especially after filming numerous sequences. It’s also got a higher frames per second-rate at 3 than the T2i.

We know this is a huge jump, but we only wanted to include a camera this expensive if it was worth it. These cameras are professional. If you get one, you’re officially big time –  there’s no doubt about that. Why we recommend this if you’re going for a grand or more is because of the quality – it is literally cinematic. The DSLR cameras a feasible and will do just fine, but if you do want to take that big leap and make your music videos truly stand out among the saturated music realm, this is the one to get.

Here are some of the features: A 20x HD video lens (35 mm) with an “8-blade circular aperature”, 1080 with 60 frames per second in MP4 format. You can do slow and fast-motion recording, and has built-in WiFi for transfer to your PC (not completely necessary, but a plus). The zoom is crazy good, as you can adjust the zoom control at a set speed. Look into this if you’ve got the money. You can also go for the cheaper version (a few hundred less and still an amazing camera), the Canon VIXIA HF G20.