The best mirrorless camera for video is going to bring us amazing quality and durability. When it comes to filming videos, the first thought you should have is, “How can I get the best video quality for the money”? If you’ve come here for a reason and know the power mirrorless cameras to bring us, the question of video quality becomes an afterthought. We’ve seen mirrorless cameras recommended for high-quality photographs time and time again, but what about the best models for filming videos? Today we found a few to help with your search.

The Advantages of a Mirrorless Camera

Mirrorless cameras are the freshest types of cameras to hit the market within the past decade. They didn’t even really have a name until a few years ago. However, we’re continuing to see their growing popularity for quite a few reasons. They have interchangeable lenses, which as seen in the popular DSLRs, allows us for a lot more custom shots when it comes to the overall look and feel of your photos and videos. Their build is a bit different from others as well — there’s less focal flange distance between the lens mount and plane of the sensor. This helps with compatibility of many lenses out there, especially with larger focal flange distances (which may call for an adapter).

The popular mirrorless and DSLR camera differences question will always be asked — and we totally understand. Ultimately, both are amazing types of cameras and you can really do no wrong either way. As compared to DSLR cameras for filming video, both are amazing for shooting videos, regardless of their application. So what does this all this fancy wording mean? Aside from lens compatibility, they merely provide some of the clearest picture and video quality we’ve seen in a while.

Some say they rival professional grade cameras, so if you’re grabbing a mirrorless camera, you will definitely be standing out from the rest. The debate for mirrorless or DSLR cameras will always be a big one, but in our opinion if you have the budget, going mirrorless gets you better quality (and a smaller size).

It is also extremely important to note that both DSLR and mirrorless only film for 30 minutes at a time. You then simply have to press record again, however this can be a nuisance for some either recording on their own or those who don’t have access to a camera person.

We saw a mixture of both mirrorless and DSLR models in our video camera for sports and video camera for YouTube for good reason. Which type you need boils down to your overall preferences, and budget of course.

Let’s open it up with something affordable. Sony begins our list at #1 with the highly recommended Alpha a6000 mirrorless camera for filming videos. It’s one of the best for many reasons — it’s relatively affordable as compared to others, gives us full 1080 HD video quality (at 60p or 24p), 24 megapixel photograph quality, a very nice and quick autofocus feature, as well as a sleek design that’s super portable. The sensor inside of the unit isn’t necessarily professional but it’s great for most applications (even in the semi-pro world) with an APS-C Sensor.

On top of that and combined with its 4D FOCUS autofocus technology (four dimension and wide coverage area) to help with less blurs and disruptions in your clips (especially when you want to zoom in and out of your target), this makes the Sony Alpha a6000 one of the best mirrorless camera for filming videos within the lower price-point of the camera type. Check out the video demo below to get a feel for the quality you’ll be getting. If you wanted another one of their extremely popular mirrorless cameras which provides 1080p HD video as well, check out the Sony A3000 since it’s a lot cheaper in price, too. 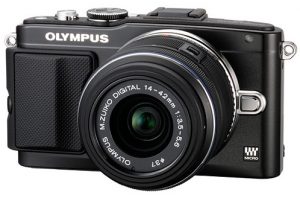 Up next we have another one of the best mirrorless camera for filming videos, and this time Olympus brings us a decent package for yet another affordable price (we’re still in the lower price-point among mirrorless cams here). The E-PL5 is a bit of an older model as compared to some other new mirrorless cameras, but with that we’re able to find some confident reviews when it comes to its longevity over time. The specs include a 16 megapixel Live MOS sensor as well as a TruePic VI image processor (gives us some fast response time and color\contrast accuracy).

The Full 1080i HD video quality and playback via HDMI output fits our recommended standard, and the autofocus system in here is great as well (has some face and eye detection features to help with that). The 3.0″ LCD flip portrait display will help view your clips real-time and overall build of the body is highly durable and portable. If the previously listed model was too expensive for you, the Olympus E-PL5 is usually found for a bit cheaper and may be the perfect model for your videos. 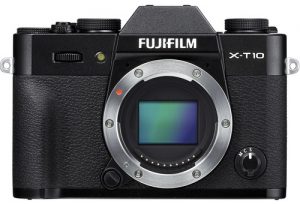 We’ve heard of many Fujifilm enthusiasts out there, and if you had a few more bucks to spend as compared to the previous two mirrorless cameras listed, this is a very solid model to grab. The sensor is higher in quality (APS-C X-Trans CMOS II) and it has a real-time viewfinder (2.36M dot high-precision electronic) which is great for light sensitivity (especially bright environments) and shorter lag time when filming subjects. The design is very compact like other mirrorless cams and also lightweight, so you’ll be great in terms of travel but also fatigue if you’re going to be filming for a long period of time.

Their AF system (autofocus) is pretty advanced as well — combined with its sensor and EXR Processor II, you have a split-second (.06 seconds!) focus time to ensure your clips are super smooth. The Fujifilm X-T10 is recommended for those who have some more money on hand and want some higher quality clips since the sensor and processor are built very well. For an even better model, their Fujifilm X-T1 is a beast, albeit for a lot more cash. 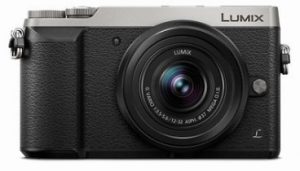 Here’s one of the best mirrorless cameras in the market that shoots in 4K video quality. It has a 5-axis in-body sensor stabilizer for extremely smooth video clips, decent 16 megapixel quality photographs, and additional help in terms of picture detail since the advanced build eliminates the need for a low-pass filter from the sensor. You’ll also be getting an electronic viewfinder and some Wi-Fi capabilities.

Aside from all the fancy terminology we’ve been seeing with these mirrorless cameras for video filming, we’ll put it simply — grab this one if you want to shoot in 4K. Although the quality isn’t the standard right now and some displays don’t even support it, with the Panasonic LUMIX GX85 you’ll eventually be among those once it becomes more popular. Not to mention you’ll be standing out from the rest right now when it comes to the look and feel of your clips. 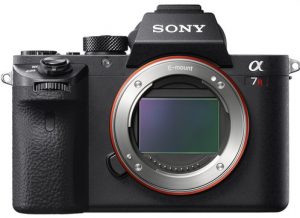 This mirrorless camera for shooting videos is a specimen. Now we’re starting to get into the ream of higher price-points, but if you have the budget, you’re definitely going to stand out from the rest of the pack with this one. Sony tends to be the more popular brand among the mirrorless camera market for quite a few reasons, but this particular model is up there with the best of the best. The a7R II is a back-illuminated 35 mm full-frame camera with a whopping 4K video quality, CMOS image sensor, sensitivity of up to ISO 102,400 and a monstrous Fast Hybrid AF system (it has a very dense and wide focal-plane phase-detection to ensure extremely sharp focus of everything in front of it, not just a particular subject).

Combined with the 5-axis image stabilization tech (to reduce blur, especially in handheld shots), this thing will rarely, if ever, lose it’s focus and detail of your video clips. Oh, did we mention the photographs are a whopping 42.4 megapixels, nearly double most mirrorless cameras out there? This is definitely for those who are serious about their video shooting. You won’t be disappointed with the quality the Sony a7R II brings, not to mention will be an investment for many, many years down the road. 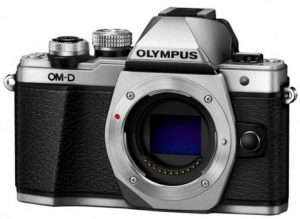 Continuing along our list, we’ve seen this model mentioned many times in those big website’s comparison tables. We love this one since it brings us back down to a more budget-friendly price tag if that’s what you were still looking for. There’s a built-in 3-axis image stabilization technology, Full HD 1080p video, 16 megapixels (Live MOS Image Sensor) for photography, 8fps sequential shooting, a pretty impressive (for the price, at least) autofocus system (it has 81 selectable areas), and a convenient interactive electronic viewfinder.

What makes this a bit more unique than others is the extra 12 unique art filters that may appeal to you, otherwise many like to wait until post-production or in Photoshop to tweak their pictures and videos. Regardless, if the Olympus OM-D E-M10 is cheaper than others out there (depending on where you look), it may be the perfect balance in a mirrorless video camera for you. 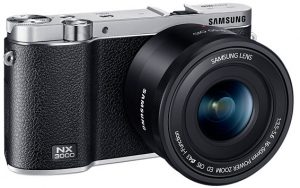 Here’s Samsung’s appearance in this shopping guide and although highly rated, it’s getting a bit more rare as time goes on but we’ve seen many still available. It’s equipped 20.3 megapixels (APS-C CMOS Sensor) for some great detail and color recognition, video recording of Full HD at 1080p (although only 30p), 1/4000s shutter speed, some Wi-Fi connectivity, remote ViewFinder (you can control your camera and adjust settings from your phone — pretty cool!), and an overall cool-looking vintage design.

The lens support isn’t as high as many others out there, but if you weren’t concerned with that, the lens that comes along with it is great. The Samsung NX3000 brings us some great essentials in a mirrorless camera with a few little extra features you may like as well. 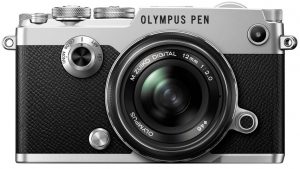 To top off our list, we have another heavy hitter in the best mirrorless camera for filming videos market. This is Olympus’ beast of a camera, topping off as their flagship model of the PEN series many out there love. It has a 5-axis image stabilizer, very fast autofocus, up to 11 fps of continuous shooting and of course, 1080p video resolution (60p). The viewfinder is up there like a few we’ve seen previously at 2.36M dot (electric), and a solid aluminum and magnesium construction.

If you were concerned with strictly numbers, the 20 megapixels (although it’s a Live MOS Sensor) isn’t considered too high compared to others within its price range, but we’re talking video here, so take that with a grain of salt unless you’re going to use yours for serious photography as well. We recommend the Olympus PEN-F if you wanted a mirrorless camera in the higher price-point but didn’t want to spend more than a grand on theirs. Just be sure not to forget your lens.