A MIDI keyboard is a standard in any studio now, whether you’re at home in a bedroom or somewhere considered ‘professional’. A setup without at least one of these is unthinkable (although we know a few producers who simply draw their MIDI now without even using a controller, but we digress). The range with MIDI keyboard controllers is pretty broad, as we’ve seen some go up to a grand or more, so today we wanted to focus on a decent price-point to get you a mixture of power, capability, and affordability. Here are the best MIDI keyboards for under $500.

The Best MIDI Keyboard Controllers Under $500

The Advance 49 has some great playability and a lot of extra features many would seek in a MIDI keyboard if you plan to do some automation while you produce or even live performances, all with a full color display. A few of these highlights include the eight multi-color, RGB-illuminated MPC style pads that are both velocity and pressure-sensitive giving you complete control over whatever DAW you are using with eight tweakable knobs that give you the ability to switch up your second in real time. It’s also loaded with other additive features we love only available with Akai products, like MPC Swing, MPC Note Repeat, and an arpeggiator for complex rhythmic and melodic manipulation.

The Nektar Panorama P4 is quickly making a name for itself, and we have here a touch-sensitive and highly dynamic MIDI keyboard. It has a lofty ninety-three parameter controls, nine faders, sixteen encoders, 3.5” color display (TFT), an eleven button transport bar that positions where you need it and twelve velocity pressure-sensitive pads (seven individual velocity curves). On top of this we have even more dynamics, like their monophonic aftertouch, pitch bend and modulation wheels, as well as foot switch and expression pedal jacks.

The Nektar Panorama P4 MIDI keyboard is compatible with all major DAW without a problem and comes with pretty much everything you need in a controller, let alone with a very sturdy build to complete the package. 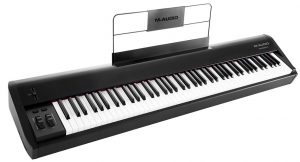 Another premium MIDI keyboard controller under $500 we’ve come to love is the M-Audio Hammer 88. We have has 88 fully-weighted hammer action keys (this is what you’ll be buying it for), assignable MIDI buttons, octave and volume controls for expressive additions to your sounds, modulation and pitch-bend wheels, and sustain secondary and expression pedal inputs.

This MIDI keyboard under $500 has a very sturdy construction as well as 4×4 pad grid and longer faders than many others out there. It also has three dedicated buttons for switching between user modes, your DAW and VST’s, 16 backlit (RGB) touch and pressure sensitive pads, nine sliders, rotary encoders and buttons, six transport control switches, four command switches, as well as two separate wheels for mod and pitch-bending. The Arturia KeyLab MkII is a straight up beast.

The Roland A-800 PRO is another professional MIDI controller loaded with great features all for under $500. Our favorite model of this keyboard controller has 61 velocity sensitive keys for playing virtual instruments (however you have a few more different options for different prices) and forty-five assignable controls, buttons, knobs and sliders.

Even more, we have four programmable zones, pedal connections of which two switches, and the beautiful Studiologic’s triple-switch detection system and keyboard feel programmable for soft, medium, hard, fixed — great for adding dynamics to your play. One of the best MIDI keyboards under $500 for those who want less flair and want to focus on high-end key make to emulate that piano ivory.

The Novation Impulse is a beautiful MIDI keyboard under $500 and we’ve lost count at how many times we’ve included this in our articles. This MIDI controller is a super responsive, semi-weighted keyboard with aftertouch. It also has eight back-lit drum pads which can create arpeggios, launch clips and roll beats in Ableton Live, eight rotary, nine faders, a ton of assignable buttons, transport controls and an LCD screen on top of it all.

The Impulse Novation works with all popular DAWS and comes with a collection of great software and sounds such as Novation Bass Station, Loopmasters sample library, Mike The Drummer and Addictive Keys virtual instrument from XLN Audio, and Ableton Live Lite.