We’ve lost count with how many free synthesizer plugins we’ve downloaded in our lifetime, and to be honest it’s a good thing — we’re huge believers of just stacking our arsenal with as many sounds as possible (perhaps going overboard can overwhelm you, if that’s the case stick to just a few until you really learn them). Synthesizer VST in particular are a favorite of ours, and in our opinion it’s one of our favorite sound VST when it comes to having a lot of free VST options available to us. The following is a list of our favorite!

A product of German online magazine Amazona.de, Tyrell N6 was put together after readers were encouraged to share input on their needs regarding what features should be included in the best synthesizer VST for free. Using a standard design, the developer added a few additional modules and features. The core of this design has been on offer as freeware for more than five years. Downloadable on the magazine’s website, Tyrell N6 is not a standalone product, but it is compatible with just about all DAWs.

For downloading, the required operating systems are Windows, Mac, or Linux. Tyrell offers more than 580 factory presets, which are ideal for the beginner during their experimental phase. It also has an audio source mixer and two oscillators. The virtual analogue sound used by Tyrell N6 lends mixes musical authenticity. The user-friendly interface is easy to understand and operate, making it a favorite among amateurs and professionals alike.

Developed by the Daichi Laboratory, Synth 1 packs a punch with its many features, which is why it remains a firm favorite as one of the best free synth software options among users and ourselves. Its 128 presets give the user an indication of just how versatile Synth1 is and its light CPU load also makes it an attractive proposition. With an amplifier, four filter settings, equalizer, and arpeggiator, Synth1 delivers professional sound quality despite its zero pricing.

The low-frequency oscillator allows the user to modulate tempo and key without needed to introduce another source to do so. The voice features provide for portamento and legato modes, and up to 16 poly voices can be added to a track. Synth1 has been the subject of some mixed reviews, although most of the negative ones relate to installation, not to the functioning of the product. Synth1’s compatibility requirements are Windows or Mac OS X. 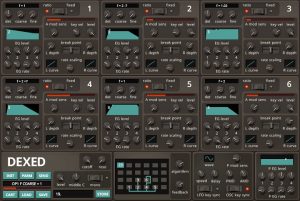 Dexed from Digital Suburban is a contender for the best free synthesizer VST plug-in if its reviews are anything to go by. This multi-platform, multi-format plug-in synth acts as a companion for its predecessor, the original DX7. Closely modeled on DX 7 characteristics, the music-synthesizer-for-android sound engine gives the user a myriad of synth functions. It operates on the Windows, OS X, and Linux platforms as well as in the VST, AU, and LV2 formats, making it one of the most versatile choices the user can opt for.

A look at Dexed’s interface indicates how powerful it is as it provides the user with a multitude of features to use. There are 144 available on only one panel that are DAW automatable DX7 parameters. It is usable with native DX7 and TX7, acting as a patch editor and SysEx manager. Each version varies slightly in its features depending on the platform and format in which it is downloaded and used.

Developed by Matt Tytel, Helm is a multi-platform polyphonic synthesizer, operating on Mac, Windows, and GNU/Linus in its standalone program capacity, and also as a VST/AU plug-in. One of its most significant features is its oscillators. These dual oscillators offer cross modulation, and both have unison and harmony modes. There are two monophonic and one polyphonic low-frequency oscillators, the latter featuring a 32-voice polyphony which is bound to add depth and quality to any track.

With settings for amplitude and filter envelopes, articulation, feedback, stutter, and delay, Helm is widely regarded as one of the best free synth VSTs on the market. Its seven filter settings offer the user versatility and interesting applications in any track. The product’s interface is easy to understand and optimized for user interaction, making it a go-to for a lot of amateurs and professionals around the world. One of the factors that makes Helm a favorite among users is its user-friendly interface, which is easy to use while still delivering an impressive array of options.

In the words of one user, T Force Alpha Plus is a worth addition to any user’s arsenal of freeware and rivals several paid versions. This praise together with that of many others makes T Force Alpha Plus one of the best free synth software options on the market. What some might view as a minor limitation is that the product is only compatible with Windows. It offers synth functions such as subtractive synthesizing and FM synthesis.

T Force Alpha Plus also has a separate noise oscillator, three free-running oscillators that offer the user several options, including voice control, adjustable stereo width, and phase retriggering. The two low-frequency oscillators that can be synched to a host are among the other functions that can be automated to meet the user’s customizing needs. The product also contains ASDR filter, amplifier, and modulation envelopes and a function for saturating or distorting the track.

The over 1,100 instruments ZynAddSubFX boasts can be organized in kits, allowing the user to layer instruments for additional effects. The built-in virtual keyboard replaces a physical MIDI keyboard should the user not have immediate access to one. The ZynAddSubFX interface might look a little complicated, but that’s because it’s packed with so many features. Once the user has interacted with it a few times, it becomes easy to understand and work with. We still can’t believe it’s free. 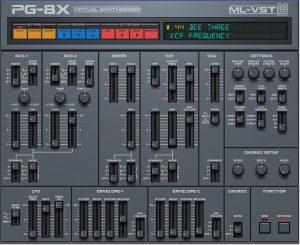 The PG-8X 2.0 interface gives the user the old-school feel of an analog synthesizer, although there’s nothing old-school about its features and options. If you’re into vintage synths, this is an absolute must. In fact, a lot of experienced users continue to rate it as one of the best free synthesizer plug-in options available due to it’s uncanny replication of that analog warmth. This virtual analog synthesizer with the prescribed 2-DCO and 24 decibel and octave filter design packs a powerful punch. The product features voice polyphony for up to 12 voices, two digitally controlled oscillators (DCOs), a low-frequency oscillator (LFO), and variable filters.

The LFO allows the user to control a specified delay time. PG-8X has 128 memory slots for presets that the user can write and include. Settings include master tune, unison detune, octave stretch, filter noise, mono trigger, and LFO sync. PG-8X facilitates the import and export of any JX-9P Sysex data, allowing the user to seamlessly blend the two together. The product is available as a download on Windows and Mac to function as a standalone program.

BlauKraut’s Charlatan is one of the best free synth VST plug-ins you can choose if you’re looking for freeware. This virtual analog synthesizer plug-in focuses on producing outstanding sound quality while maintaining a usable interface that helps users achieve their goals without struggling to figure out how it works. Despite the interface’s simplicity, Charlatan is still jam-packed with exciting features that encourage users to steer away from using presets and start doing their own tweaking and synthesizing.

The plugin has two oscillators featuring shape modulation and a unison mode that allows the inclusion of up to seven voices. The LFO synchronizes with the existing host tempo for ease of use. There are three filters to choose from, as well as two ASDR envelope generators. Best of all, Charlatan boasts exceedingly low CPU usage despite the multitude of features it offers.

Developed and distributed by a group of students from the Berlin Technical University, Synister is one of the best free digital virtual synthesizers available as a VST/AU plug-in for PC and Mac-based DAWs. The product features three oscillators, each one offering the choice between pulse, triangle, and noise waveforms. Each oscillator also has adjustable modulation of volume, pan, and waveform shape, making it possible to do some impressive work without once leaving the oscillator panel. There is one ADSR envelope for volume, and another two for modulation. Synister has two filters, each offering four modes.

The FX section allows the incorporation of chorus, clipper, bitcrusher, and delay effects, which can layer and deepen any track. The user can turn off modules they don’t plan on using to reduce CPU usage, although Synister is one of the most optimally streamlined plug-ins when it comes to CPU usage and stability. One thing that users think deserves improvement is Synister’s interface as it is tabbed, making it laborious to move between tabs to program it. However, what it delivers more than makes up for any sense of inconvenience the user might feel.