Some of the better available paid drums VST out there can cost an arm and a leg, so we did some thorough searching for the best free drums plugins for you all below and weren’t too disappointed in quite a few of these we went through. If you’re like us at all, you’ve probably spent way more money than you’d like to count on VST plugins in general, but we digress; is there such thing as too many sounds at our fingertips? Not in our opinion, since we download basically ever free VST we can if one ever comes across our eyes. Let’s check out what we found below.

Spitfire Audio LABS by itself is a huge plugin database offering various sets of software instruments as free plug-ins — we’ve downloaded every single one that they offer (guitars pianos, strings, and more). In our case today, its Drumkit was released in 2012, yet it remains a favorite among many users who rate it as the best free drum VST software for its ease of use and overall great sounding kits. Featuring the percussive stylings of Oliver Waton and the engineering of Stanley Gabriel, the sound production here is pretty pristine and gives us a ‘real feel’ to them as opposed to some other digital-sounding drum sounds out there.

The interface is conveniently clutter-free and straightforward, featuring three FX settings. The first is the reverb dial, followed by a volume slider and a second slider that allows the user to adjust the elimination of velocity levels. As a free dedicated plug-in, Spitfire LABS Drumkit is downloadable on Mac OS and Windows. It is available as a direct plug-in for the user’s preferred DAW and does not require Kontakt. One of Spitfire Audio LABS Drumkit’s best features is how well it integrates with other VST plug-ins but honestly we recommend literally downloading every single one of their free plugins — they have tons and are some of our favorite free VST out there, period. They’re all free — why not?

When it comes to percussion synthesizers, Waldorf is well-known for its high-quality products. Among them is one of the best free drum VST plug-ins any musician wouldn’t harm their collecting by adding — the Waldorf Attack percussion synthesizer. Described as producing ‘old-school’ percussive sounds reminiscent of the 80s and 90s, there’s nothing old-fashioned about this free VST plug-in. We’re spoiled for choice when it comes to percussion instruments, including conga drums, cymbals, maracas, tambourine, snare drums, and even cowbells.

On drums, it provides a choice of kits and sounds. But this VST also features an amplifier, allowing for the adjustment of volume, velocity, pan, and mix. You can move effortlessly between two envelopes when engineering your drum recording, changing each one’s attack, decay, shape, and release. It also on top of this comes with two oscillators, mixer, filter, and delay panels where the user can freely adjust settings to create the sound that they’re after. The vintage, warm analog sound combined with elements of modern digitization makes Waldorf Attack a useful, convenient percussion synthesizer. One of our favorite free drums VST for sure.

Developed between 1980 and 1983, the Roland TR-808 Rhythm Composer entered the market right as electronic music was becoming mainstream. Tactile Sounds TS-808 allows today’s user to recreate those vintage rhythms, making it one of the best free drum VST software programs on the market if you’re looking for old school. The TS-808 is more than just a Roland TR-808 clone as it offers the user more parameters and range, allowing for further customization of drum sounds.

The percussive instruments featured on this free drums VST include bass and snare drums, clap, cowbells, maracas, and cymbals. The user can also select low, mid, or high Tom or conga drums for their recording. Every instrument on the program includes velocity, level, and pan as customizable features. Depending on the selected instrument, there are also settings for tone, tune, decay, reverb, attack, clang, and snap. The Tactile Sounds TS-808 is entirely free to download, but it is available for PC only use unfortunately. 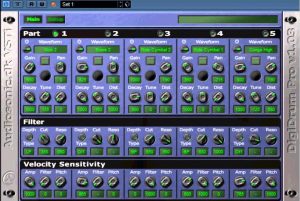 AudioSonic DigiDrum Pro is regarded as one of the best free drum plugins because of its five separate DigiDrum parts, which can each be adjusted and manipulated to suit the musician’s preference. The VST features 27 percussive waveforms, including drums, and its five-part feature makes short work of the layering of up to five percussive tracks to produce more complex music pieces. Each part has the same settings. It allows for the selection of the waveform as well as gain, pan, decay, tune, and distortion. The filter allows for adjustment of the depth, cut, and resolution.

The final setting is velocity sensitivity, which gives the user the chance to manipulate the amplification, filter, and pitch. These features in our opinion make AudioSonic DigiDrum Pro ideal for producing versatile timbres and sounds. The user can import waveforms as samples to use in the program, making it the perfect option as the best free drums software for sound mixers who want to experiment with various forms of percussion.

TeragonAudio KickMaker is a free drums VST plug-in for those looking to customize one of the most important parts of drums altogether — their kick drum. This kick drum synthesizer furnishes the user with access to four oscillators, with each adjustable according to frequency, attack, decay, sustain and release. Each oscillator has a separate ASDR curve. All four oscillators and the ASDR have independent volume settings to move some sounds to the foreground, as is the user’s preference. 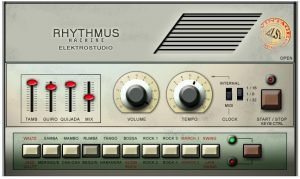 If you’re interested in an old-school rhythm machine, look no further than Elektrostudio Rhythmus, which is rated as one of the best free drum VST options for music mixing enthusiasts. Despite its seemingly simple interface, Rhythmus facilitates a lot of synthesizing processes. At the bottom, the user chooses between 20 different rhythms, including waltz, samba, rumba, tango, merengue, cha-cha, and bossa, as well as four rock and two march rhythms. Volume and tempo are controlled using the on-screen dials.

Once the user clicks on the ‘open’ button, they access the ability to adjust the tune, pan, and volume of each rhythm component. These include, among others, bass and snare drums, bongo and conga drums, tambourines, and cymbals. The additional layer of mixing lets the user mix the rhythmic sections with the tambourine, guiro, and quijada sounds, adding a more unique flavor to the recording.

The Max Project’s T-Rex 606 a drum synthesizer the imitates the sounds of the world-renowned Roland TR-606 drum machine with good sound quality, giving it a spot on the list here. The T-Rex 606 is defined by its simplicity, described as a ‘what you see is what you get’ type of product. It offers seven samples for the user to play around with: the kick drum, snare drum, low tom, high tom, closed hat, open hat, and cymbals.

The user can express their preference for volume and reverb by tweaking them according to what’s best for the track. While it might seem somewhat limited, the T-Rex 606 is still worthwhile having as a drum synth VST because it’s so easy to use, and the sound is amazing. T-Rex 606 is downloadable for Windows and Mac.

The Grooove BPB free drum sampler packed with features that can synthesize great organic-sounding percussive pieces. What makes it one of the best free drums VST plug-ins is that it is CPU-friendly, unlike some of its counterparts. Not to mention it used to be paid but they’ve made it entirely free. There are already 14 drum kits and 150 samples included in the VST, but it is also fully expandable so the user can import external samples as well.

Grooove BRB features six dual drum pads, with adjustable volume, pan, pitch, entry time, and length, and each drum pad can hold up to two samples concurrently. In total, each drum pad offers the user 11 sound parameters. The Grooove BPB is downloadable for Windows and Mac, and also functions as a standalone program. One of this plug-in’s nifty features is the help section. By clicking on the question mark at the top center of the screen and then hovering over any component of the interface, the user gets a quick description of what it does, making this ideal for beginners. 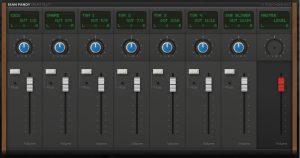 Sean Pandy Drums offers four toms, a kick drum, a snare drum, and a sub-blower. The plug-in comes in stereo or multi-channel, giving the user some additional acoustic options. Each drum features six velocity layers and up to 10 random samples. There are two sliders at the end of the interface panel: one for volume and the other for reverb. Each drum can be subjected to individual volume and pan adjustment or be completely muted. Sean Pandy Drums is ideal for drum replacement work and has found favor with producers of heavier music genres. Sean Pandy himself is a much-respected metal music producer. This VST is downloadable on Windows and Mac OS. 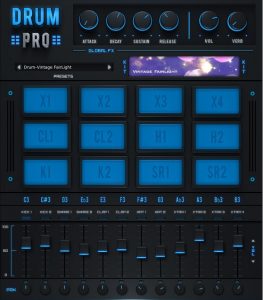 From StudioLinked comes the Drum Pro VST, compatible with both Windows and Mac. What makes Drum Pro our last pick as one of the best free drums VST plug-ins around is its versatility; it is favored by RnB, trap, and pop producers and those looking to experiment with multiple genres by putting out top-quality beats. Drum Pro comes with 20 kits sampling nine vintage drum kits, including the Roland TR 808 and TR 909, among others.

Using StudioLinked expansion packages, the user can continue to add to Drum Pro. The plug-in’s global effects include attack, decay, sustain, release, volume, and reverb settings. By using the drum pre-sets, the producer can pan each one individually according to their needs. Drum Pro boasts excellent sound quality and features kick and snare drums, clap and hat settings, and some extras as well.