Finding the best beginners audio interface will take a little bit of research, but after compiling a list of our favorite models here you won’t have to stay long. As we continue to build our beginners music equipment rig, or really ‘home studio’ in general, we’re met with a very important part of our backbone — the audio interface. Ever wonder how we’re able to gather a clear recording signal for our microphones and instruments? How about a way to organize our gear into one easily, controllable box? Audio interfaces are so important I typically tell my readers that we need one of these before any other piece of gear (aside from a computer). Without it, there isn’t a point to get going yet.

What is an Audio Interface?

An audio interface is a device that connects to a computer or mobile device in order to provide higher sound quality input and output for recording purposes. Think of it as an ‘external sound card’ as well as ‘power amplifier’ to give our microphones and instruments both better sound quality and the ability to actually work without any other equipment. Most music computers and recording laptops aren’t able to provide enough power for microphones if you were to just connect them straight in (unless you’re using a USB microphone), and the sound cards built-in just really can’t cut it (as of now). There is also something called ‘latency’ which often occurs when hooking up microphones and instruments straight into a computer. Audio interfaces specialize in this process and also give us higher-quality drivers to take away this painstaking problem many of us have experienced.

Moreover, an audio interface improves the sound quality of your computer by expanding your inputs and outputs. Audio interfaces are definitely an important component in computer-based audio production. They can be used when you want to record podcasts and music, as well as in video post-production to record voice-overs and sound design. Audio interfaces can be used when you are looking for professional level of audio performance from a computer i.e. when one or more than one instruments, microphones and other types of signals require to be routed into or out of a computer.

So why buy an audio interface? Honestly, we couldn’t imagine making any type of music without one. Unless you’re only using samples to create your work, you’re going to need some type of device to make it happen — hence the audio interface. Here are some tips to keep in mind while shopping for your beginners audio interface:

The Best Audio Interfaces for Beginners

Up first, the 2i2 is famous at this point, and designed for high quality recordings recordings and easy makeshift plays making it one of the best audio interface options for beginners on the market. We have one below our feet right now, and have had zero problems using this thing for the past few years. We have zero latency when recording our mics and instruments (you have 2 ins here, there are other models which you can opt for more if you have more cash). The interface has an easy set up procedure and is relatively simple to use included with many plugins and connections needed. The interface is compatible with most computer systems and outputs are easy to connect to other devices. In terms of build, the interface has a sturdy and durable exterior complete with two noise free amps that are reasonable quality considering the price. This system is a great way to bypass figuring out drivers by simply setting up the interface and recording right away.

Due to its simple design and easy to use features, the 2i2 is quite reliable and should have no problems updating software to use it for years. The sound quality is crisp and clear with minimal latency issues and simple metering. The sound is clear an accurate in its recordings which is a great and inexpensive way for artists to capture their work on the go, as we’ve even seen it used with laptops with mobile studios as well. With all the connections included, the device is ready to go with only a short setup time needed before a recording can begin. For its relatively low price point, the Focusrite Scarlet 2i2 is by far the best beginners audio interface in the market today. It’s reputation will prove that to you if you read a few user reviews around the net.

The UM2 is a simple and effective audio interface best used for musicians starting out recording their own creation endeavors. The audio interface is compatible with most computer systems and other devices such as keyboards, guitars, amps etc. Overall, Behringer builds are a little cheaper than others but they’re able to get away with this as their gear is typically cheaper than most. That doesn’t mean it won’t last you as a long-term investment. The sound is very robust and clear, which proves you that you don’t need fancy equipment to perform a great track. This interface is popular among low-budget home studios and is also popular for on the go artists looking for a quick way to setup their recordings.

The UM2 comes with a full downloadable copy of Tracktion meaning you can begin recording as soon as you setup and play, especially if you haven’t chosen your beginners music software yet. The interface also comes with Xenyx microphone preamps and instrument inputs attached for some quality recordings. Even with an inexpensive model and amps, the sound quality is surprisingly good and even rivals many high-end products in terms of efficiency and cost price. For those looking to start out and those who are experienced, the Behringer U-Phoria UM2 is another one of our favorite picks as the best audio interface for beginners.

The USB 96 is another compact and conveniently easy to use as the best beginners audio interface. With its conventional and durable frame and convenient setup, this audio interface is best used with beginner musicians looking to record their own music or perhaps those wanting to start a new podcast. The system comes with PreSonus preamps, which can be used to connect many different instruments and devices to its interface (they too have other options available in terms of ins and outs). The USB 96 has a 24-bit / 96 kHz professional resolution for a complete and super clear recording experience. Its modest operating system and sleek design make it a good seller for those that need a quick setup and are on the go musicians that need simple recordings.

The USB 96 also comes with Studio One Artist DAW software, which is about a $100 value if you don’t have any software yet. It’s also pretty well-known among the DAW world. Lastly, the Audiobox has a duel channel design that allows for both a mic and other instrument to be connected at one time and the interface includes a two combo mic inputs and two output connections with headphone and MIDI networks. Regarding build, it is relatively lightweight and has a rugged appearance, however what it lacks in looks it makes up for in usability and simple setup times. For its moderate price point, the PreSonus AudioBox USB 96 is a value packed bundle great for artists looking to get started right away. 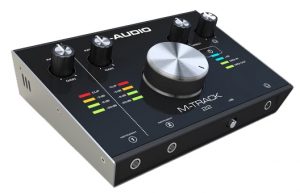 The M-Track is another reputable and efficient audio interface to look into for beginners, this time developed by one of our favorite brands out there, M-Audio. Its unique design and retro outlay with modern features make it stand out from its competitors. The device is a relatively cheaper option and simple to use. The interface uses a high-quality signal to captures to provide a transparent and low noise sound recording experience that is best used in a tight situation.

The M-track has stylish led lighting, a latency free monitoring function and a USB port for power and data transfer. The model contains a great mic preamp with your standard sound quality vs. competitors. The device also comes with Protools First DAW (not the full version of PT, but you can still try it out to see if you’re into it and later upgrade), an extensive range of plugins and other effects. The 24-bit / 192-kHz resolution makes sure that the sound quality is top notch, concise and clear. The M-Track works well for recording demos, master recordings, streaming or really anything else you need in regards to recording or portraying a clear audio signal. The M-Audio M-Track 2X2 is a good buy as the best audio interface for beginners considering it’s low affordable cost and will be great for those looking to start out.

Yet another one of the best beginners audio interfaces out there, The Onyx Producer is a sturdily build interface that specializes in affordability, audio fidelity and durability. The device has a 2 channel audio link and standard 24-bit 192 kHz operating system like many others in this guide, and also comes with their ‘Onyx mic preamp’ for some great phantom power and quality if you’re using microphones. Although an intricate design and system, this audio interface is one of the best for beginners starting out in performance and recording presentations without too many “extra features” that would drive the cost up.

Included are two mic-line inputs (XLR connectors), manual backlit switches for the Hi Z function and a 48V phantom operator. The unit is USB powered but does not have an external power operator. Included is also Tracktion T7 DAW and some essential plugins to compliment it, which is always a plus if you don’t have any yet. For its moderate price, the Mackie Onyx Producer is a good interface model for beginning audio recording rather than performing. It doesn’t have a line\instrument in for let’s say a guitar, so if you do need some connectivity for that we recommend looking into the Onyx Artist 1 + 2 (but you’ll only get 1 XLR). 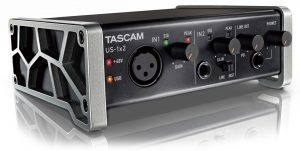 The US-1×2 is one of our favorite best budget audio interfaces for beginners looking to get started in the recording and music scene overall. Nothing too out of the ordinary that we haven’t seen in the guide thus far — a USB interface with 24-bit / 96-kHz resolution (not necessarily as high as others with 196 kHz but the difference isn’t really noticeable with 24-bit) and high definition discrete architecture preamps for a great overall sound when recording. Included is also a stereo line jack/mic and multiple input functions although only one can be used at a time.

The US 1×2 is intent on creating good value for money with an XLR mic connector and some 48V phantom power to get going on recording immediately. Its high price point (at least compared to a few in this guide) is offset by the amount of accessories included with the device. The optional AC adapter and bus powered mobile operating system is also best used with IOS devices for optimal performance if you’re going the mobile producing route. Desktop recordings are possible of course with an additional HDDA input function which is switchable to instrument level for guitars and similar instruments. The Tascam US-1×2 is a great value for the money for those looking to begin their careers or recording their own performances.