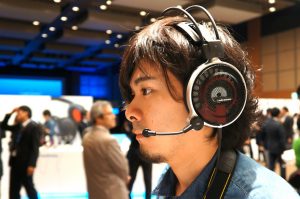 We love music equipment because it can be supplemented for other audio niches, such as the basis of our article here, gaming. We’ve already reviewed the best Audio-Technica headphones specifically for bass as well as the overall best headphones made by A-T, but what about other realms? Audio-Technica has recently come out with an entire line of headphones made specifically for gaming. The market is saturated with many types, models and brands of gaming headphones, but we’re huge advocates of Audio-Technica so we’ve decided to research and review their new catalog.

The best Audio-Technica headphones for gaming

Right now, Audio-Technica has only released two pairs of headphones (they’re labeled as headsets) which pertain to their ‘gaming series’. They’re both around $300 retail, but are jam-packed with features and have crazy quality. There are some they offer that are a little older which we also recommend for gaming later, but as of now, we will be compared the two gaming-specific headsets they’ve recently released. We will then mention some notable headphones great for gaming (these don’t include a mic, however). Here’s a chart outlining their features.

Other pairs of Audio-Technica headphones that are best for gaming

These are discontiunued by Audio-Technica since their release of the gaming headsets, but there are still plenty around the net and for a very cheap cost of under $100. They are open-designed with air dynamic audio quality. They provide a pretty good deep resonating bass and vocal projection with 53 mm drivers. Also included is the self-adjustable 3D wing support that Audio-Technica users have come to love. The CCAWW voice coils are also top-notch, so if you’re looking to save some money, we recommend grabbing these since they’re under 100$ retail (only problem is again the lack of microphone, which you can supplement to save money). Look around eBay too.

They are closed-back headphones and also include their signature double air damping system for deep bass reproduction pruposes. The 53mm drivers also include the CCAW voice coils, the wing support is again their 3D housing. The only bad part is that they lack a microphone, but they are half the price of their ‘gaming headsets’. If you can find an external mic to supplement this with, you can get a very big steal as it’s only around 150$ retail. We’ve seen some floating around eBay (some even used) for cheaper than retail. These have been a huge hit around the gaming community. They are also offered in blue.

As we can see from the chart, their sound systems are built differently. The ATH-AG1 features the D.A.D.S. structure with ‘double air damping system’, while the ATH-ADG1 has the Open-Air design and CCAW. What do these mean?

Similarities of the Audio-Technica gaming headsets

Let’s start our analysis. They are both ‘audiophile grade headphones’ — what that exactly means is, they’re high quality that most studio producers would use for finer detail in all frequencies of sound. The impedance is top-notch, allowing us to use our on-board sound. Next, both headsets are compatible with PS4, iPad, iPhone, laptops and PC. Here’s what else they both have in common:

Either of the pairs are going to be extremely advantageous for you to use while you game vs. your competitors. Both are jam-packed with Audio-Technica’s top-of-the-line technology when it comes to audio quality. I’ve used both of these headsets at a LAN center and I could hear footsteps very clearly (it was online, but I think it was before the opponent was able to hear mine — so I won). The ADG1’s were first released to be $50 cheaper than the AG1’s, but sellers around the net have evened them out. We’ve seen both on eBay for cheaper than retail. Our decision would be based on your preference for open or closed-design, or whichever you can find for cheaper around the net.