In general, we’d say audio interfaces are just about the most piece of the backbone of music studios, or really any type of recording environment (podcasts, streaming, etc.).The under $500 budget is a great starting point for those who want to really go after a higher-end model and make it into the semi-pro world. Today we have our favorite audio interfaces for under $500 below, and we ended up sticking with six to give you some options.

The Best Audio Interfaces for Under $500 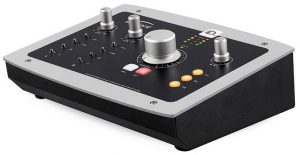 Here we have a model with just about perfect scores all around. This USB audio interface and monitor controller has great recording quality, solid build, two separate mic channels, two lines in, six lines out and a headphone in. In addition to this, it has optical I/O giving the option for additional ins and outs using an ADAT connection. The Audient iD22 also has key commands for more common jobs and custom presets to be saved.

It has two very good mic preamp that gives us a great platform to produce high quality recordings, phantom power for condenser microphones and even some filters to remove unwanted low frequencies. This audio interface runs at the rate of 24 bit / 96 kHz and is compatible with Windows and Mac 10.6.8 or higher. Check out the Audient iD22 for a solid pick as the best audio interface under $500 as it brings us most features that are necessities in one of these, and has the user reviews to back up confidence in the buy. 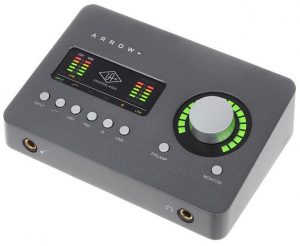 The Universal Audio Arrow is one of the best audio interfaces for under $500 if you’re on a Mac. It has two channels of recording and is powered by Thunderbolt-3 (which is rare in this price-point as typically Thunderbolt can really get up there). It has 2 lines in and 4 lines out, two “Unision” mic preamps and UAD-2 SOLO Core processor.

With the latter two, regardless of the audio software buffer setting, the Universal Audio Arrow interface records at almost no latency. It includes the “Luna Recording System” recording application and runs at the rate of up to 24-bit / 192 kHz. Just one of our many beautiful audio interfaces by UA, and they’re known for their Thunderbolt interfaces if it’s within your budget.

Steinberg UR-RT2 is another very solid audio interface under $500 that we recommend quite frequently, mainly due it being so user-friendly and not quite lacking in any features most will need in an interface. It is a two channel, four lines in and 2 lines out, no latency, professional audio interface with effects using dspMixFx software and integrated SSP2 DSP. This interface also has switchable ‘Rupert Neve’ custom designed input transformers which play an important role in the sound quality and how your sound is processed.

They give warmth and fullness to vocals or instruments. It also has phantom power and 2 D-PRE Class A preamps. The UR-RT2 runs at the rate of 24-bit / 192 kHz with a dynamic range of 101 dB. It comes with VST3 Basic FX suite including Sweet Spot Morphing Channel Strip, Guitar Amp, REV-X reverb classics plug-ins, loop back function, Cubase Al multitrack software and Cubasis LE DAW. The Steinberg UR-RT2 interface is compatible with PC, Mac and iOS. 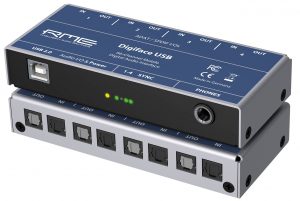 RME typically has super high-end gear and more suited towards professional studios, but this is one of the best USB professional audio interfaces for just under $500 due to the power it brings without a ton of other features as they usually do. This interface is bus powered, has strong drivers, is small in size, therefore compact and portable for travel and has a lot of features that make it versatile. It has 4 ADAT/S/PDIF optical input and output ports each.

The RME Digiface features triple ADAT I/O interface, Digiface USB and adds another optical I/O which results in 32 channels in and out each when using ADAT optical so your ability to expand with this thing is crazy. It runs at the rate of 24-bit / 192 kHz. This USB interface includes the Total / Mix FX digital real time mixer and DIGICheck (analysis, testing and measuring tool). 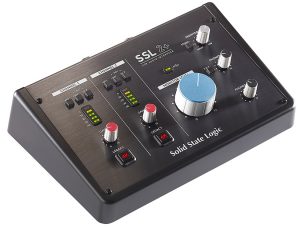 The Solid State Logic SSL2+ is a two lines in and two lines out USB audio interface also with midi IN/OUT, two classic SSL microphone preamps and two headphone outputs. Our most favorite (we have one of these ourselves that we use), is this interface features “The Legacy 4K” button which adds warmth and brightness to the audio input.

It has two SSL designed analog microphone preamps, 2 balanced outputs as well as 4 unbalanced outputs, a custom high current headphone amplifier, and is USB 2.0 bus powered. It runs at the rate of 24-bit / 192 kHz and comes with the SSL Production Pack software bundle. The Solid State Logic SSL2+ just came out last year but is already a fan-favorite because of the audio quality.

Another professional and portable USB audio interface is the PreSonus Studio 26c for less than $500. This interface has 2 lines in and 4 lines out, it is USB bus powered, MIDI I/O, 1 headphone output and has a built-in Studio Magic Plugin suite which is an incredible bang for your buck if you need sounds and software.

The PreSonus Studio 26c has two good sounding XMAX-L preamps and is equipped with the Cue Mix A/B headphone which lets you switch between two independent mixes or for cueing up tracks. It comes with the Studio One Artist software and runs at the rate of 24-bit / 192 kHz and a dynamic range of 115 dB.

Finding the Best Audio Interface Under $500

An audio Interface lets you connect instruments and microphones to a computer and record using USB and output different signals. In another word, they are the “middle man” between external instruments and your computer. As there are many different types of audio interfaces with many different options, one can be confused and find it difficult to choose from. Some can have good features; some can be easy or difficult to use. For this reason, in this article, we have gathered the best audio interfaces under $500.