We continue our saga into the best audio interfaces within a specific budget-range, and today we have quite a nice one for those in a home recording studio, looking to start a podcast or begin their streaming hobby, or anything in between that calls for some higher-end recordings that don’t involve a USB microphone. We stuck to our typical formula of finding a different interface for each reader we think it’ll pertain to, so below is an assortment of a few of our favorite audio interfaces under $200 to help restrain your search to a few highly-rated options that are worth checking out.

The Best Audio Interfaces Under $200

Looking for the best audio interface under $200? Here’s one of our favorites out there right now, mainly because this offers all of the essentials that may pertain to the most of you out there. Whether you are a mobile musician, sound designer, or podcaster, the PreSonus AudioBox iTwo offers clear input no matter what sounds you are recording with a microphone — it can work well with most instruments, too. Because it is designed for people on the move, the PreSonus AudioBox iTwo boasts rugged construction to prevent damage from accidents during transit or use outside a studio. If not, it’ll still give us longevity when it comes to a long-term investment.

We have various controls in the front such as gain, headphones volume and main volume, two channels for two different mic/instrument inputs with phantom power for each. The audio interface is compatible with Mac, Windows, and Apple iPad, making it a versatile performer that will meet any user’s requirements. The PreSonus AudioBox iTwo also comes with a nice software library to assist the user with recordings and the editing and mixing that come afterward. 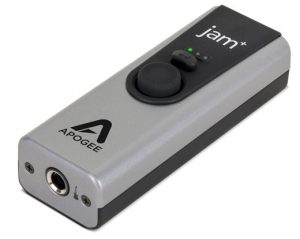 For pristine sound, look no further than the Apogee Jam+, arguably the best audio interface for $200 or less on the market if you can get away with it’s build that is quite different than other interfaces out there. A professional audio interface offering USB instrument input and stereo output, Jam+ is compatible with iOS devices and Windows. It is regarded as a high-quality digital interface to connect guitars, bass, keyboards, synths, and other acoustic instruments.

Fitted inside a metal chassis to keep it safe from accidental falls, etc., the Jam+ features something called Apogee’s PureDIGITAL circuitry, simply put is the internal build that helps with harmonics and digital processing to help the user with the true tone recording sounds they need. The Apogee Jam+ requires no setup and configuration, working as a plug and play device that can be used with any audio recording app. Whether a beginner or a pro, this audio interface includes a headphone output that delivers crisp sound with minimal delay or latency. Great for on-the-go recorders as well, since it’s so small and can fit in pretty much any front pocket of a backpack or laptop case. Described as a new take on the audio interface, the Audient EVO 4 USB device delivers outstanding results without fail. For this reason alone, users regard it as a contender to be the best audio interface under $200 available today. For independent musicians, producers, and podcasters who do not have constant access to a studio, a top-quality audio interface that will give them what they need wherever they may find themselves.

The EVO 4 does that and more. Two transparent EVO 4 preamps, instrument input, converters, and Smartgain automatic level setting functions give this audio interface the ability to facilitate outstanding sound while remaining portable for mobile users. The EVO 4 is compatible with Windows, Mac, and iOS, and additionally comes with some nifty Audient ARC bundled software.

The Focusrite Scarlett 2i2 may be one of the most popular interfaces out there ever, and on top of some essential controls and high-end audio resolution, comes with a substantial software bundle and is compatible with iPad Pro, Mac, and Windows. This USB-C bus-powered has two powerful third-generation preamps and delivers low latency, better sonics, and ease-of-use for anyone who tries it. It is no surprise that the Focusrite Scarlett 2i2 is regarded as the best audio interface for $200 or less by its users, who have given it an average of an A in thousands of reviews everywhere.

Getting this device up and running takes little time as it features a ‘Quick Start’ tool to get you going. The buyer receives a free three-month Splice Sounds subscription, Pro Tools First, and a membership of the Focusrite Plug-in Collective. Halo indicators allow the user to keep an eye on signal levels to ensure your recording is of optimal quality, too. We’ve had ours for years.

Whether you work in a home studio, on stage, on the road, and just about anywhere in between, the MOTU M2 is without a doubt a favorite for many users, who regard it as the best audio interface under $200. Featuring a 120 dB dynamic range and its high-end ESS converters clarify headphone output, some users rate as better than headphone amps that cost a fortune.

When it comes to live inputs, an audio interface cannot hamper proceedings by having a delay. The MOTU M2 provides the necessary speed to a computer through its USB bus-power supplied drivers, and is compatible with Mac and Windows. The user gets free software to accompany their purchase, including MOTU Performer Lite and Ableton Live 10 Lite (the DAW we personally use). Buyers searching for the best audio interface for $200 or less and if you’ve made it this far in the guide, should undoubtedly consider the iRig Pro I/O in mind. For recording on the go, this professional audio/MIDI interface lets the user utilize any compatible gear and monitor it in real-time. Whether you want to connect studio equipment to an iPhone, iPad, Mac, PC, or Android device, making it one of the most versatile performers in its class.

Its plug and play design means that you will not have to spend hours getting it set up and ready. The iRig Pro I/O also has a MIDI out jack, offering the user even more flexibility in making the most of its many functions and features. These include a top-quality preamp offering gain control, a headphone volume adjuster, and a guitar, mic, and line input.