Novation music has really started to set themselves apart from the competition in terms of equipment and recording gear. Their MIDI keyboards especially have started to really grow on me, and this particular 25-key mini MIDI keyboard is getting some very positive reviews around the music world. For only $100 retail, this thing packs an unbelievably powerful punch. A huge plus … END_OF_DOCUMENT_TOKEN_TO_BE_REPLACED 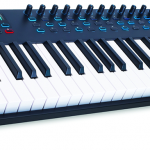 Alesis music gear turned some heads when they announced their new release of VI MIDI keyboard controllers. This particular model is the bigger brother of the Alesis V61 MIDI keyboard which is very solid but has less drum pads and a few other key components (hence the price). This time around they've added 16 pads as well as some other cool capabilities to make a run at the more … END_OF_DOCUMENT_TOKEN_TO_BE_REPLACED 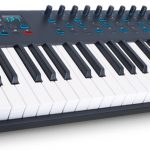 Alesis music instruments has been getting a bit of buzz with their release of the new VI series of MIDI keyboard controllers. Stated by some around the music equipment world to rival the Akai MPKII series, these are a bit cheaper in terms of price and pack most of the same features. We saw in our VI25 MIDI keyboard review that it was pretty worth it, especially with 16 pads as … END_OF_DOCUMENT_TOKEN_TO_BE_REPLACED 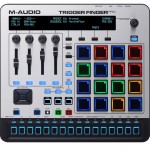 About ten years ago, M-Audio came out with the Trigger Finger (pretty much discontinued), stated to be one of the first MIDI pad controllers to be released in the music realm. Now they've got the first fully integrated drum sequencers. The Trigger Finger Pro is a portable performance instrument with on-board sequencing as well as a software control station. It consists of 16 … END_OF_DOCUMENT_TOKEN_TO_BE_REPLACED 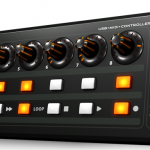 Behringer is out with an awesome trio of USB control surface devices -- the X-Touch series. In this article we will be reviewing the third, most compact and cheapest machine of the three -- the Behringer X-Touch Mini. At an extremely affordable price of $99, this is a must-have for those looking to add on some DAW control into their music setups. It's perfect for those who are … END_OF_DOCUMENT_TOKEN_TO_BE_REPLACED